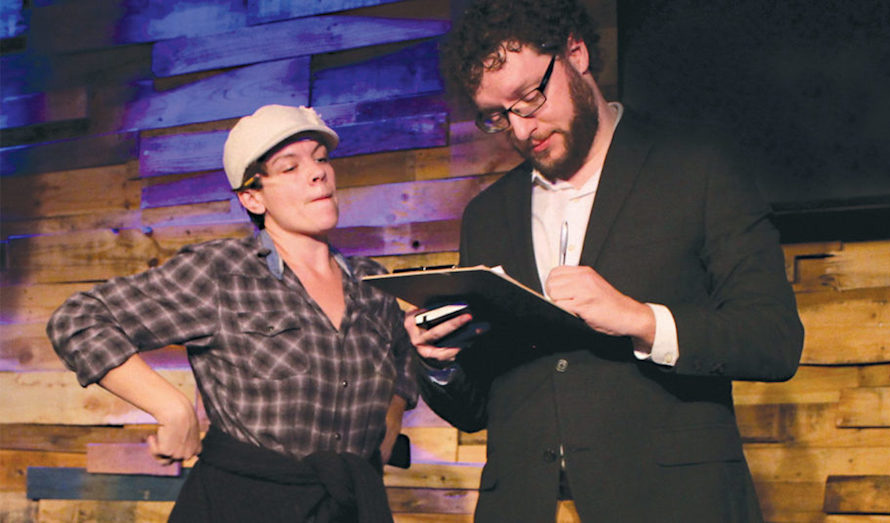 It’s a risky business, messing about with masterpieces. But when it works — as it does in The Chamber Theatre’s “Eliza: A Play on Pygmalion” — the rewards are tremendous. That’s especially true in this case, because “Eliza” is a fascinating celebration of the rise of women’s political power, and it opens on the heels of an historic election that saw a wave of women rise to unprecedented political power in the U.S.

“Eliza” is, as its title suggests, an adaptation of George Bernard Shaw’s 1912 play “Pygmalion.” “Pygmalion” is certainly the best-known play from a prominent writer of the last century. But the story is also familiar to modern audiences because, in the 1950s, Lerner and Loewe turned it into the wildly popular Broadway musical “My Fair Lady,” which became the multi-Oscar-winning film with Rex Harrison and Audrey Hepburn.

If, perchance, you haven’t seen the film, you should remedy that. But, first, you should see this nimble and insightful Chamber Theatre update. In case you don’t know the story, here’s the gist. Henry Higgins, an arrogant scholar of phonetics, meets up with Eliza, a brash, lower class, female guttersnipe whose accent is atrocious. When Higgins boasts that, through elocution lessons, he could train Eliza to pass for a person of higher class, Higgins’ scholarly colleague Dr. Pickering lays a wager that Higgins cannot. And a tense, combative course of study ensues — with tests along the way where Higgins presents Eliza in increasingly elite social environments.

The Chamber folks have transplanted the tale to Louisville. And the fun that stems from that is enough to justify the ticket. The action starts at Thunder Over Louisville. And in order for Higgins to win the wager, Eliza has to successfully give a speech at The Fancy Farm Picnic. The lessons take place at Higgins’ home at St. James Court, and there are plenty of droll references to Louisville life.

That alone — coupled with an excellent, confident cast — would be enough to create satisfyingly frothy entertainment. But this production aspires to more.

Where Shaw’s play is a study of class, “Eliza” offers a sharp look into gender relations. The program doesn’t specifically credit anyone for the adaptation. Rather, the press kit hints at a collaborative process among Director Martin French and the players.

What they’ve done is hew to the storyline while disrupting the perspective. Higgins (Josh O’Brien) and Dr. Pickering (Joe R. Monroe) may view Eliza (Kate Bringardner) as a linguistic lab rat to be toyed with for their amusement and edification. But unlike Shaw’s Eliza — whose goal is simply to land a humble job selling flowers in a shop — this Eliza harbors real ambitions. Instead of gathering signatures on petitions, she wants to wield power.

At first it seems that Higgins and Pickering are using Eliza, but by play’s end we know that Eliza was in the driver’s seat. Bringardner’s episodic journey from pugnacious guttersnipe (with an appallingly delightful Pittsburgh accent) to graciously authoritative politician is finely performed with a deft blend of pathos and humor, cynicism and passion.

The men in the play, O’Brien, Monroe and Jake Minton (as Freddy, who is smitten with Eliza) offer fine complementary responses to Eliza’s transformation.

And the emerging solidarity among the other women in the play — Henry’s mother, Mrs. Higgins (Laurene Scalf); his secretary, Marian (JoAnne Sweeny); and Freddy’s sisters, Sophia and Clara (Julia Bright Moran and Annie Bulleit) — enriches the story with finely pointed humor and moral heft. Bulleit, by the way, is fantastic as a precociously wicked lass who eventually grows up to become a beacon of hope with the drive and smarts to change the world. (Also, at strategic moments, Monroe steps out of his own character and plays Shaw, as a genial host and guide to the implications of the action.)

The Chamber Theatre focuses on late 19th- and early 20th-century plays and has offered fine productions by writers such as Chekhov, Ibsen and Strindberg.

This, however, is something of a breakout production. Yes, it is timely and thought-provoking and based on a classic. But it’s also a free-spirited, wildly entertaining piece of theater that will reward your attention. By the way, the running time is under 75 minutes — and it goes by in a flash.

Speaking of wildly entertaining, fast-paced theater, Pandora Productions is serving up the latest installment in Anthony J. Wilkinson’s series of droll comedies about the Pinnunziato family. The other night at the Henry Clay Theatre, one usher quipped that this play, “My Big Gay Italian Christmas,” is the fourth part of a trilogy — and somehow that seems a perfectly apt description for this delicious bit of holiday cheer.

Pandora is a company with enormous dramatic range, and I love what it achieves with serious works. But I’m always astonished at the unbridled joy it brings to plays like this. And Jason Cooper, who has a great track record with this series of plays, is back again to direct and play Anthony Pinnunziato — whose romantic entanglements are always central to these stories.

This time, the entire Eastern seaboard is suffering under a snowstorm, but nearly all of the family has made it home for Christmas. This is a family where women rule, and, once again, Cooper has assembled a great collection of Louisville’s comic actresses: Barb O’Daniel-Munger, Kristy Calman, Anna Francis, Anna Meade Engard, Jessica Tanselle, Carol Williams and Rita Hight.

As foils for the women, there is a trio of men. One is a cop played by Jared Burton. The others are the couple whose complicated relationship drives the action. Jacob Cooper plays anthony and his newest crush, a handsome heart surgeon named Victorio Anthony Bucatini (yes, if you were wondering, he is Italian) is  played by Elliott Talkington.

Maybe you’re familiar with Facebook’s relationship label, “It’s Complicated”? Well, there is no label complicated enough to cover this scenario. But here are some elements: an extremely pregnant Pinnunziato, a very wronged wife, a couple of stray nuns who come in from the cold and the most gloriously raucous family in the history of theater. Come on. It’s Christmas. You know you want to. •