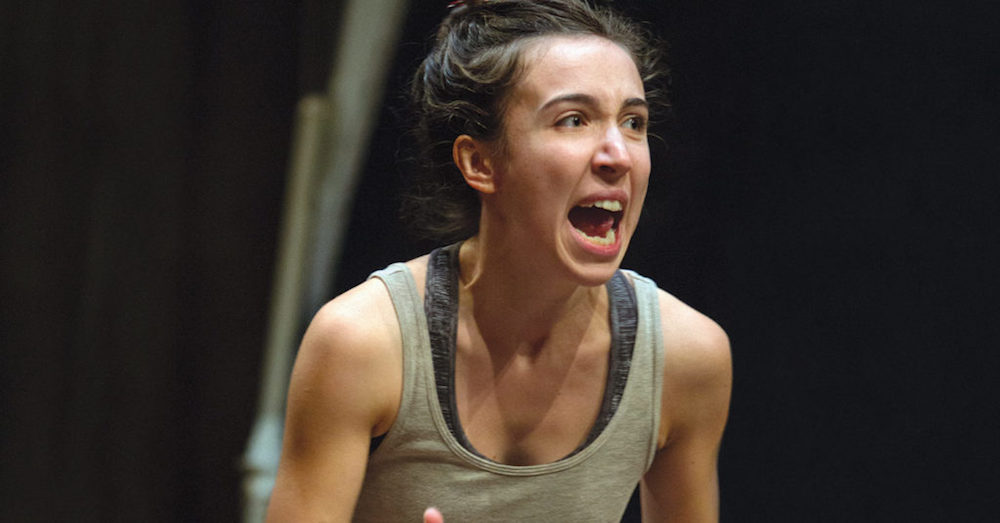 It’s one thing to be able to perform completely solo and make the work feel like a full story, not just a monologue. But what really makes these Actors Theatre of Louisvlle’s “Solo Mio” pieces stand out is that they’re created from scratch by the Professional Training Company members who act them out. The actors write them and then work with a dramaturg and director to polish them and portray them on the stage of Actors Theatre’s Victor Jory Theatre. The point of these Solo Mios isn’t just to show off the acting skills of the PTC, but to showcase the creativity as a whole — and watching them, it’s hard for the audience not to feel inspired to create themselves.

On Saturday, the company wrapped up its third round of “Solo Mios.” Each round contained six or seven plays, each six to eight minutes long, performed by one member of the PTC.

Throughout its season, this year’s training company has shown that its not ones to pull punches. In “And We’re Live,” a new Mara Nelson-Greenberg play performed recently by the PTC, it tackled such issues as climate change, media bias and the danger of putting a raging megalomaniac in a position of power — themes all too familiar these days. The “Solo Mio” pieces proved to be just as hard hitting.

Russell Sperberg’s “Minutes_12/2/08.doc” felt reminiscent of “And We’re Live” and shared the same director, Emily Moler. Much like “And We’re Live,” a deadly environmental disaster looms, and Sperberg’s character desperately tries to warn his peers, while those in power have their own reasons to keep him quiet. His desperate cry for the PTA of his son’s school to “vote” on the issue rings clear just a few days before midterm elections.

In Josh Fulton’s “A Prayer on the Corner of 149th and Broadway,” directed by Crystian Wiltshire, we saw a modern Gethsemane scene played out by a young, black Jesus terrified of the sacrifice he has to make but ultimately motivated by the dream of black people finally liberated from the oppression of systemic racism.

Ash Patlan’s “Mayflower” introduces the audience to a young girl preparing to take the dangerous trek from Mexico to the U.S. border.

In “White Noise,” Jonathan Moises Olivares spouts sound bites from recent news in a way that starts out as something quirky and quickly grows serious.

Sexism, rape culture and mental health are all themes explored in these short plays. Even some of the lighter “Solo Mios” resonate with very real feelings, like the way that a need for validation can frustrate creativity in Kayla Peters’ “Grey Duck,” or the challenges of being a gay teenager even with an “accepting” family in Emma Maltby’s “Fifteen” (a spin on the Taylor Swift song). Such a wide variety of topical themes calls for a diverse cast, and that’s certainly found in the actors and directors of the PTC. There’s no tokenism here, though Seun Soyemi’s “I Am Not Your Teacher” plays out a horrifying look at what tokenism can become. Throughout the series, there are multiple takes on immigration, on the black experience, the search for representation and the fears women and people of color feel in a society that’s so violent toward them. The plays don’t shy away from controversy and neither does the cast.

One of the most interesting things about the series was the lobby display on the way into the show. Red string and scattered pieces of paper showed the various inspirations for each piece, as well as scraps of early scripts. Playlists, news articles and brainstorming lists were some of the things that could give the audience a sense of the piece. The way some of the plays worked in music, dance, slam poetry and other art media helped to amplify the sense of creativity and inspiration throughout. For the actors, it was about far more than just delivering the lines well. Some, such as Olivares in “White Noise” and Rebby Foster in “Xioyan,” performed the majority of their piece without speaking, but through their movements and expressions, they explored the scene around them or showed their internal conflicts. Others, like Maltby in “Fifteen” and Brett Schultz in “Camp Dan,” were so convincing in their discussions and arguments with off-stage characters that those characters felt as real as they were.

Whether in the “Solo Mios” or “New Play Projects,” the company displays strong, young actors at the beginning of their careers. Silvia Day Bond, who played a very Type A expecting mother panicking over her child’s future as she attempted a “gender reveal” video in “How Revealing” as well as the megalomaniac owner of the news station in “And We’re Live” seems to have already proven herself as a powerhouse performer. Patlan was another standout, whose performances stay with you long after she leaves the stage. Rasell Holt in “Beef” ran through a wide spectrum of emotions and even various characters in his short, seven-minute performance.

With the last of three “New Play Projects,” “Same Time Same Place” having opened and closed on Monday, the PTC’s season may be over until their Humana Festival showcase, but it’s hard to believe this is the last we’ll see of any of these actors.