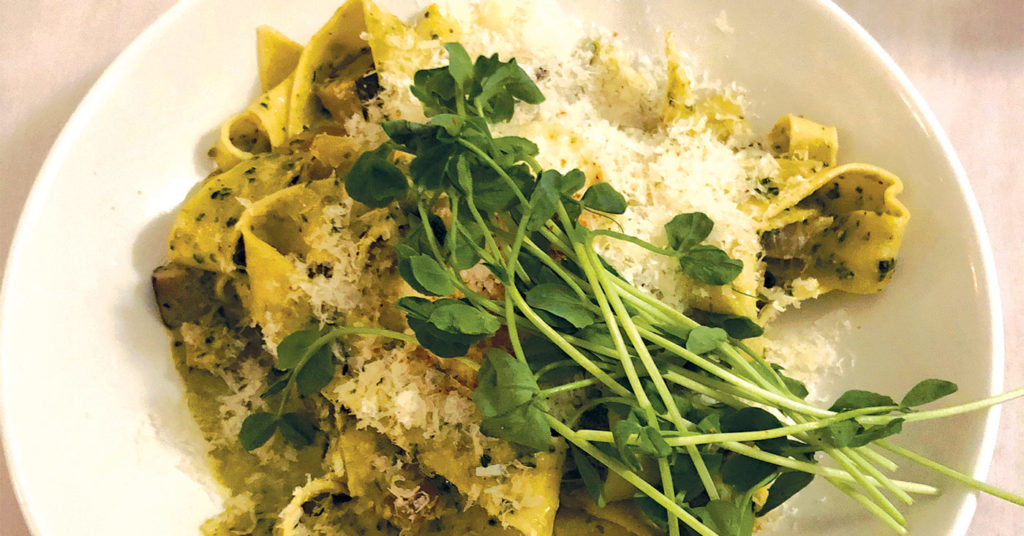 Spring was in the air on the morning of March 10, 1977, when the Harrods Creek Volunteer Fire Department rolled out to an alarm at the old Pine Room restaurant on Upper River Road. A fire that began in the beloved restaurant’s kitchen quickly involved the rest of the building.

Before firefighters could contain it, the building was gutted by fire, smoke and water. The restaurant, a local landmark since the 1940s, closed. In its heyday, it had been a popular destination, known for its friendly, saloon atmosphere, comfort food and lounge pianist named Mable, who kept a candle burning atop her grand piano.

Now, some 40 years later, The Pine Room is back, or something a lot like it, anyway. Opened late in August in the modern building that had replaced the also-burned-out Chick Inn in 2004 and later housed Cast Iron Steakhouse, the new Pine Room carries some of the spirit of an older generation in the style of the new.

Its walls are an elegant off-white now, with antique mirrors and an abstract fabric wall hanging. Attractive light fixtures are equipped with Edison-style bulbs that shed a cool light. A waist-high wall separates the dining area into sections, and a long, well-stocked bar dominates one end of the room. There’s no grand piano anymore, and Mable has left the building, but an old spinet, sans candle, stands near the bar.

The menu offers just six main courses, with a more extensive list of starters that seem chosen to go along with the extensive bar service. Entrées range from $18 (for a vegetarian option, a quinoa-brown rice grain bowl) to $37 (for a dry-aged strip steak with marrow butter and frites). Nine apps are $9 (for pan-fried spinach dumplings) to $14 (for Florida shrimp and grits or a nachos platter). Dinner salads are $11 and $12, and the Pine Room burger is $15.

Spirits, cocktail, wine and beer lists are well chosen and interesting. I thought long and hard about The Mable, a riff on the Manhattan, in honor of the epic pianist, but we went with a Paper Plane ($10), a lighter, aromatic blend of Old Forester with Aperol and Amaro Nonino and lemon peel, and one of the best French rosés around, Belleruche from Chapoutier ($8).

Upon arrival, we were served a snack of crunchy cheese treats broiled on a sheet and cooled into savory cookies.

Delicious, pan-fried spinach dumplings ($9), similar to Asian potstickers or Japanese gyoza, were filled with a spinach and had a pleasant but unexpected touch of fiery spice. A tart-sweet, brown citrus-ginger dipping sauce added a dimension. A friend’s order of fried artichoke hearts ($11) was just as fetching, artichoke leaves cloaked in crisp breading and served sizzling, dark golden-brown.

Napa cabbage salad ($11) was fresh and interesting. Built on a base of organic baby spinach, it added crunchy strips of white napa, bits of blue cheese, chopped smoky almonds and mandarin orange sections, pulled together with a hot-sweet, honey-chile vinaigrette.

On the one hand, our entrées were very good. On the other, they came to the table on the cool side of lukewarm. Our friends reported similar temperature issues. The dish may have sat too long on the pass waiting for servers, although our server was quick and helpful; more likely, in my judgment, hot food was placed on ice-cold plates that cooled it quickly. A definite minus, but easy to fix.

Dry-aged strip steak ($37), for example, looked perfect — a pretty, pink color, grilled dark on the edges, medium-rare exactly as ordered. Unfortunately, it was plated in two, fairly-thin slices, which, dropped on a cold plate, came to the table more tepid than sizzling. It was more toothy than tender, no fault in pastured steak (our server said it came from Foxhollow Farm) and boasted the deep flavor of a quality strip steak. It came with a ball of herb-scented compound butter that was billed as marrow butter. A small crock of salsa verde, a chimichurri-like puree of parsley and garlic, came alongside, as did a small simple salad and thin-cut frites.

A bowl of wide pappardelle pasta ($19) was delicious with its light sauce of charred mushrooms and onions with their juices. It was plated over a thin pool of kale pesto and topped with a soft-cooked egg white, billows of grated Parmesan and a bouquet of crisp pea tops. Again, it was a good dish that would have been even better served hot.

With two drinks, our dinner tab was $100.70, plus a $25 tip for our capable and friendly server, Kortney and her team.

Noise level: There’s a constant roar on a busy Friday evening with every table filled. Conversation was possible, with some effort, only with nearby seat-mates. (Average sound level 84dB, often ramping up to a maximum 88.3 dB)
Accessibility: An impressive wheelchair and pedestrian ramp, built to code, bypasses the high front steps with a long zig-zag up one side of the building.