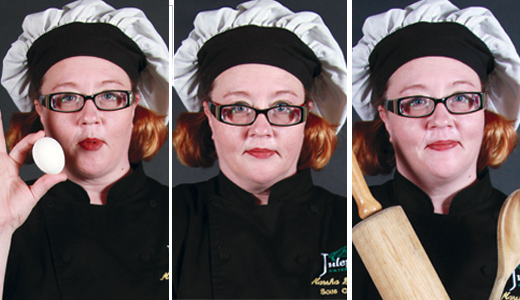 Well, Thanksgiving has come and gone. Family dynamics aside, how did it go for you, culinarily speaking?

Typically, the time you devote to prep for a celebratory holiday meal is far longer than it actually takes for you and your guests to consume it. There’s a seemingly endless list of vegetables to trim, peel, dice, slice, mince and julienne. There are proteins to carve and fillet, pumpkins and squash to break down, chocolate to be curled for garnish and nuts to chop. Whether you or someone else was the main cook, you probably started the prep the day before or even days before last Thursday’s repast.

How was your knife?

One thing great home cooks and professional chefs have in common is a love and respect for proper kitchen tools. The humble knife is your main ally in food prep, whether you’re making holiday brunch for 17 or fajitas for two on a Wednesday at midnight.

A knife doesn’t have to be expensive but does have to be sharp to function well. We sharpen knives where I work. At least half my customers seem surprised when I tell them this, as if they’re thinking to themselves, “Wow, when was the last time I had my knife sharpened?” (Then there are the ones who let me know they have their own tri-stone sharpener at home and do their own sharpening, thank you very much!)

A couple was in the shop the other day perusing the knife case and, when I told them we sharpen knives as well as sell them, the guy gestured to his wife and said,“She doesn’t like sharp knives.” She laughed and said, “Oh, no thank you! No sharp knives for me. I’m clumsy, and it would be way too dangerous!” What they don’t realize is that a sharp knife is far safer than a dull one. You have to use a lot more pressure to make cuts with a dull knife, which can lead to slippage and perilous accidents.

Even if you manage not to injure yourself trying to use a dull knife, you’ll struggle to make uniform cuts. Whether you care about presentation or not, evenly cut product promotes even cooking. If one bit of garlic is three times smaller than the next, that small piece is going to cook — and burn — sooner than the larger one. Unevenly cut potatoes, even though you’re going to puree them later, can result in a lumpy mash because different size pieces of potato get done at different points in their cooking process.

How often a knife should be sharpened depends on how heavily it is used. Many restaurants have a set of “house knives” available for their cooks to use, and these are often provided by a rental service that switches them out every week or two for sharpened ones. A home cook should have their knives sharpened once or twice a year.

Also, you know that thing that came in your knife block set you got as a wedding present? The one that looks like a rod with a handle? That’s not a sharpener. That’s a steel. It hones a knife blade, bringing the edge of your knife back into alignment without removing much, if any, metal. If you were to look at the edge of your knife under a microscope, you’d see that it looks like a row of feathers and these “feathers” bend to either side through use over time. Honing steels come in many varieties; some are flat, some are coated in a diamond particulate and some are made of ceramic. You should use your steel practically every time you pick up your knife. And you don’t have to hold your knife and steel up in the air in front of your face and make them a blur of motion like Gordon Ramsay. You can do it safely and deliberately. If you have doubts, there are a million YouTube videos to show you how.

Finally, there’s a surprise bonus to having a properly sharpened blade: The satisfaction of using it will make you go: “Ahhhhhh.” This will promote alpha waves in your brain, which will send serotonin gushing through your nervous system and, let’s face it, you’re gonna need that when your great Aunt One-Too-Many-Pomegranate-Mimosas starts talking politics during Christmas brunch. •