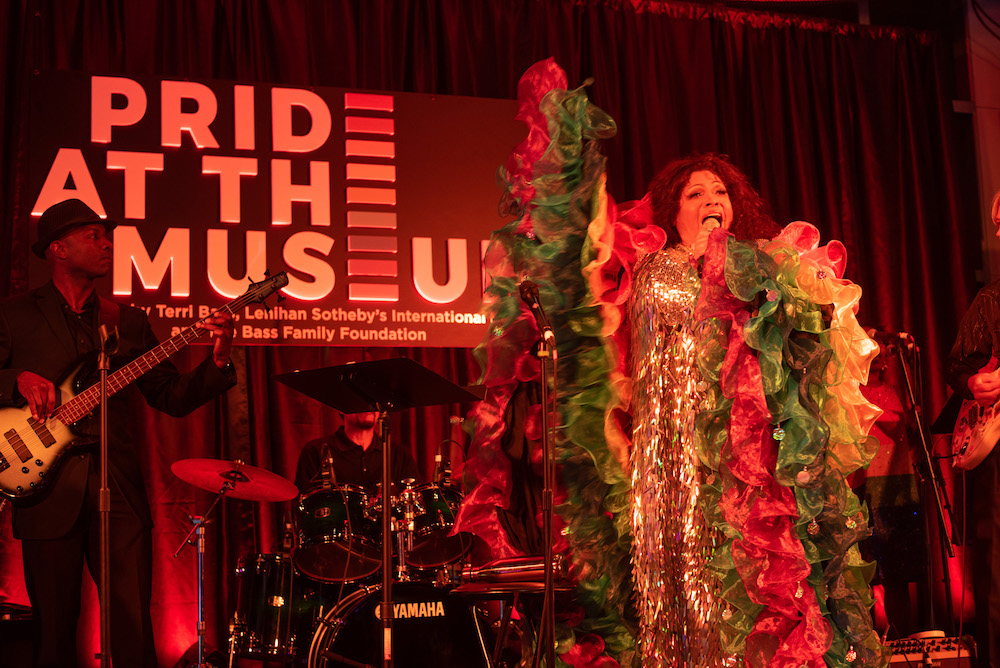 The theme of the night was gratitude.

At the UofL LGBT Center’s inaugural Pride at the Museum event, emcee Keith McGill reminded a packed house at the Speed Art Museum how fortunate we are that Louisville has so many visionary artists, its own ballet company and, of course, the reason for the event: a community that embraces LGBTQ students.

The LGBT Center at UofL has paid staff but must raise its own funds for yearly programming that includes student access to LGBTQ+ counselors and health care, LGBTQ+ related scholarships, outreach and training for volunteers.

According to Scott Thompson, a UofL alumnus and LGBT Center board member, “Pride at the Museum just made sense. We were sitting on campus trying to decide how to fund the programming for the next year, and we thought, ‘The museum is right there and has just undergone all these amazing renovations.’ And then it all started coming together.”

Lisa Gunterman, director of UofL’s LGBT Center, described the planning process for Pride at the Museum as a brainstorm for which performers and organizations would be right for an event that celebrates the LGBTQ community, as well as — minding the venue — the arts. Members of Louisville institutions such as the Ballet, the Orchestra, PLAY and many more provided entertainment.

“We kept saying, ‘What if we asked this group or that group,’” she said, ‘and we just kept getting yeses.”

Gunterman said that many UofL students come from rural areas, where they aren’t able to come out or access accepting LGBTQ spaces. Louisville is known as a haven for queer folks from all over Kentucky, but even in Louisville, said Gunterson, “what a lot of people don’t see is that there’s a community with their arms open to wrap around the [LGBTQ] students.”

That community was fully present and visible on Friday night.

Nearly 600 guests showed up in support at Pride at the Museum, which was sponsored by longtime LGBTQ allies Terri Bass, Lenihan Sotheby’s International Realty and the Bass Family Foundation. The dress code was “cocktail fabulous,” and the crowd didn’t disappoint: There were colorful blazers and dapper bow ties, high-femme glamour, kilts, enough sequins to gild a disco ball — and, of course, All is Fair in Love and Fashion products, including dramatic jumpsuits, rompers and more.

If you drove past the Speed Art Museum on Friday night, you could see through the glass exterior that something special was occurring inside. The museum was transformed for the evening with music and color. Guests were greeted first by a colorful “Pride at the Museum” projected onto the exterior, and then by a line of volunteers recruited by the LGBT Center and armed with iPads, eager to help guests check in. Gunterson expressed her gratitude for these volunteers, of which there were many.

The atmosphere was jubilant. Guests were thrilled by performances by the Louisville Ballet and local favorite, Louisville Orchestra Conductor Teddy Abrams. Another early highlight was RaeShanda Johnson’s All is Fair in Love and Fashion runway show, featuring colorful and sometimes provocative styles for women of all shapes and sizes, from butch streetwear to lingerie-inspired evening wear.

Acclaimed singer Karan Chavis performed in a larger-than-life rainbow-ruffled masterpiece. At one point, she brought onstage her voice student — and IDEAS xLab co-founder — Josh Miller to perform George Michael and Aretha Franklin’s “Knew You Were Waiting For Me” for an enthusiastic crowd. Chavis is also Chief of Staff for UofL’s School of Medicine.

Later, UofL President Neeli Bendapudi gave an optimistic speech during which she spoke about the university’s commitment to its LGBTQ students.

Guests marveled over how wonderful it felt to be in a space where so many queer couples were out and visible and being celebrated. There are plenty of LGBTQ-themed bars and nightclubs in our city, but this was dramatically different. On this topic, Louisville Ballet Marketing Coordinator Michael Jones-Gomez said, “We belong in elevated spaces, and it feels good that people are finally acknowledging that.”

It did feel good. Louisville often feels like a small town, even more so in the queer community. I saw a lot of familiar faces, and since queer couples don’t always get to hold hands when we’re in those “elevated spaces,” a lot of those faces were euphoric. It’s a rare occasion that queer couples can go out and know that not one person in the building will feel our presence is a personal insult or political statement. The sense of community was palpable, and it’s gratifying to see your own joy reflected on the faces of others.

“Pride” has been around long enough that it’s sometimes used as an empty buzzword, but with this inaugural signature event, the LGBT Center — and the university, and Louisville as a city — helped the word live up to its full meaning.