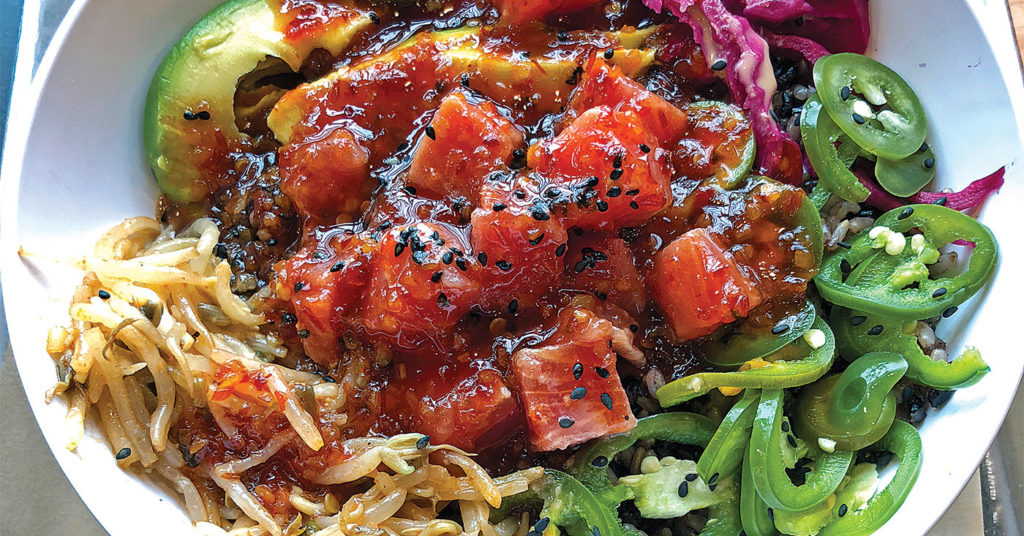 “I say it’s spinach, and I say the hell with it.” This iconic New Yorker cartoon about a young girl’s reaction to her dinner established a simple truth that was as valid when it was published in 1928 as it remains in 2018: For most of us, food that is good for us doesn’t appeal to our taste buds.

“Hold my beer,” responds CoreLife Eatery, a 2-year-old, small but growing national restaurant chain that landed two months ago in the metro amid the sprawl of Clarksville’s Veterans Parkway.

The chain, with a former top Panera Bread executive guiding development, declares: “Healthy Never Tasted So Good.” Its bill of fare features bowls of greens, grain, broth and rice: Filling meals, not just mere salads, that can be tuned to vegetarian, vegan or gluten-free preferences, plus antibiotic-free chicken, grass-fed beef, ahi tuna poke and roasted tofu as protein options. You’ll find no sugary fountain sodas here (nor alcoholic beverages), but healthy fruit beverages are made from scratch. Beet lemonade? Don’t knock it until you try it!

Mary and I dropped in the other day with our pals Avery and Nate, and we all really enjoyed our greens and grains. If the absence of desserts from the healthy menu prompted me to stop at Ehrler’s for ice cream on the way home, why… that’s my fault and not CoreLife’s.

The menu offers some 30 bowls, built on greens, grain, rice, house-made bone broths or veggie broths. They come in large or small as well as with extra protein for a small upcharge. Most range from $5.95 to $9.45, with a few barely breaking $10.

The beet lemonade ($2.95) turned out to be pinkish and tasting like barely-sweet lemonade with a distinctly, well, beety back note. I’d get it again.

Spicy ginger steak with rice noodles ($8.45 for small, $9.45 large) was not too spicy, at Mary’s request, and included a good ration of grilled, meaty cubes of lean, grass-fed beef and wheat noodles in a warm, savory, if rather mild, broth scented with ginger and barely perceptible Thai spice flavors. It was loaded with a variety of veggies — kale, broccoli, carrots and scallions. It was healthy, for sure, but the mix of flavors made it hard to pick out any in particular.

Tuna poke fire rice bowl ($9.45 small, $11.45 large) hit the spot, too. Big cubes of tuna poke (Hawaii’s answer to sushi) were cloaked in a thick, umami-rich miso-sesame-ginger dressing, studded with black sesame seeds and scooped over a base of pickled goodies — sprouts, onions, red cabbage and jalapeño slices — kicked up with CoreLife’s fire sauce. Cooling slices of avocado came alongside.

Sriracha-ginger roasted tofu with ancient grains ($7.45 for small, $8.45 large) might have been the healthiest dish, but it was also the most difficult for me to get my mind around. Your mileage may vary, but tiny, crunchy tofu cubes, quinoa, carrots and beets weren’t enough distraction to make a large bowl of raw kale go down easily for me.

Our share for two came to a modest $23.33, with no apparent provision for tipping. •

Noise level: It’s a large space with glass walls and hard edges that bounce sound around, but it wasn’t too noisy to hear; our talkative group of four probably increased the level on our own. (Average sound level 65 dB, with peaks to 83 dB)
Accessibility: The modern shopping center space is barrier-free, although you do have to negotiate a cafeteria-style line to order and choose independently.

Ehrler’s is back, and it’s good

Nothing goes much better to rid your palate of the sad and mournful taste of raw kale than a scoop of delicious, creamy ice cream, and the serious shot of bourbon in Ehrler’s bourbon pecan fudge ($3.60 for a kiddie cup big enough for two kiddies) did the trick for me.

Ehrler’s, a Louisville dairy that had operated many ice cream shops around town until the last one closed early in the century, has returned, under new ownership but with the same orange-and-green design logo and, most important, the recipes. It reopened last spring in a new building at Brook and Main streets.

The ice creams we tried were excellent, creamy and rich as homemade, although someone had unfortunately gotten green mint flavor into the butter pecan, a weird combination. Wash the scoop between uses next time, folks! •