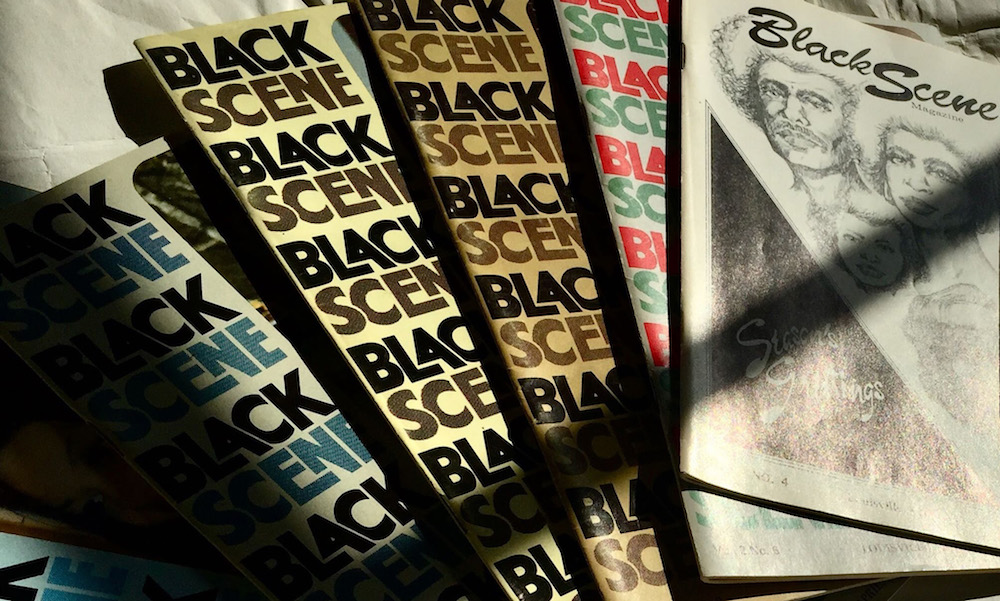 Black Scene, a West End political magazine published from 1973 to 1976, is being reborn. Louisville journalist Michael Jones and Katy Delahanty, a Portland Museum board member and Louisville Visual Art Outreach program director, are archiving Black Scene and plan to publish an updated version called Black Scene Millennium. LEO spoke to them recently about the project and where and when the archived and updated editions will be available to the public.

LEO: What all does this project entail?
Katy Delahanty: The project is in a few different phases. There is the archiving element, so that people have access to the old ones and the online website. Then, there’s going to be the quarterly publication, [an] anthology, and one of the things I’d like to do, through Louisville Visual Art, is create murals of some of the covers, around town.

So how did you originally come across Black Scene?
KD: I found them in my grandmother’s house, because my grandfather was one of the original editors of the magazine. He was a civil rights attorney and represented most of them, because most of them were doing activist work that was under a lot of scrutiny by the local government. He represented people like the Black Six, who were acquitted in ’73 of supposedly wanting to blow up the oil refinery in Chickasaw Park.

How did it feel to realize your grandparents had keep these magazines safe in their home for all these decades?
KD: I think I was so blown away at how they look and feel and the fact that my grandfather would cut and paste and make the layout by hand. It made me feel nostalgic for something I never got to hear directly from him, and I wish I would have, but he had passed away when I was 10 years old. He had done a lot of civil rights activity, and this was just one of the forms it took. He is now in the Kentucky Civil Rights Hall of Fame for all the work he did.

Where is the funding coming from to archive and create new editions?
KD: So far we have a $1,000 donation from the BMe grant from Shelton McElroy. We have written a grant for Fund For The Arts, and a fellowship application for A Blade Of Grass, which if we get, will be $20,000, so we are in the beginning stages of accumulating funding.

What are the possible dates of publication?
Michael Jones: We are hoping to get it out by fall 2019. Right now, we are in the process of scanning all the issues in, and what we want to do is have the writers themselves look through and see what speaks to them and choose what the want to write about, instead of have me tell them, ‘You have to write about this or you have to write about that… and one of the reasons we are trying to raise grant money is that we intend to pay everybody.

Who will be some of the new writers and who is on the Advisory Board?
KD: Erica Rucker, Josh Poe who is doing the redlining maps, Cassia Herron who did a lot about food literacy projects and teaches at Bellarmine, Nubia Bennett whose dad was Dr. Blaine Hudson and now she works at youth Development in the Mayor’s Office, Lance Newman who is a poet and has done a lot of activist roles, Danny Seim who is a Grammy-nominated graphic designer, and Shelton McElroy who is part of the Bail Project and is the Associate Director for this region.

MJ: We are also getting as many people from the original publication as possible.

So you were able to find many of the original artists and writers?
KD: Yeah, the executive director of Kentucky Commission on Human Rights John Johnson, who used to be one of the editors, said he would support us in any way we needed. And anybody we have talked to who was associated with it is super excited.

MJ: Yeah, Eddie Davis, who did the last two covers is a photographer and wants to take pictures, and Bud Dorsey who was a photographer for the Louisville Defender and just had a book out last year called “Available Light.’

So how many editions will be out?
MJ: People have talked to me about wanting Black Scene to be permanent, but I don’t know if we want to go that far.

KD: You never know if the funding is right what will happen, but this was generated out of finding the old magazines out of my grandmother’s house, and the beginning was where do we archive this stuff, because people need access. And then we started looking through the articles, and there was such radical writing about subjects that are so relevant today. From that point, I just started thinking about it more and thought archiving is one thing and to have it somewhere in The West End, and, then, wouldn’t it be amazing to find someone like Michael to get his own team together to do a reiteration by taking the same table of contents from the 1970s and doing it from present day, and then juxtapose the two to see what’s changed and do an anthology at the end.

MJ: We’re gonna keep the ‘70s design and do it as a quarterly. And we are going to have it online, too, but a lot people especially in The West End don’t have access to computers, so we thought it was important to still do the hard copy so that we can make sure that we are reaching all the people we need to reach, or that would be interested in this material.

Who is your target audience?
KD: Our target audience, and people who empathize with our mission, are going through revitalization, like the Russell neighborhood. So, this is in part to give them a voice, and to be able to talk about these types of issues — talking about both the positive and negatives.

MJ: And that is one of the things that is consistent about the past; The original writers were worried about redlining and resources, and now the same communities are getting displaced and things like that.

When would the anthology be released?
KD: It will be a year from the start date, so right before the 2020 elections. Because a lot of what they did in the 1970s was talk about which candidates really support their best interests.

Covers from the original Black Scene Magazine can be viewed at www.blackscene.org