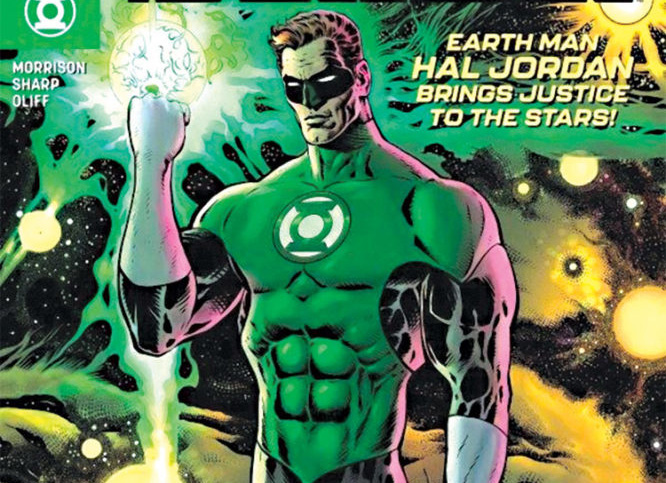 Grant Morrison is back at DC Comics, y’all! Considered to have written some of the best Batman, Superman and JLA stories of all time, he’s now taking us on a crazy cosmic ride in The Green Lantern No. 1. I know it was promised to be a more grounded police procedural, but I don’t believe that for a second with Morrison’s name attached, and neither should you.

As usual, our main Lantern we’re following is Hal Jordan. He’s stuck at home on Earth because his power battery is getting repaired and upgraded. It sucks, and he hates it, but when a fellow member of the Green Lantern Corps crashes on Earth and tells Hal about a conspiracy threatening everything, it’s time for him to hop back to active duty and go to space again.

Under Morrison’s pen, Hal feels more human than he has since Geoff Johns stopped writing him in 2014. Add to that the retro inspired art of Liam Sharp that is perfectly complemented by colors from Steve Oliff, and I think we have the makings of a Green Lantern story that will be praised for years to come

The big question surrounding this book is how accessible it will be as a new series. The answer? Incredibly. Morrison isn’t exactly known for making things easy for the sake of new fans. The Green Lantern No. 1 is a perfect jumping on point for readers new and familiar. It gets down to what a Green Lantern is at the core: a space cop dealing with intergalactic criminals. 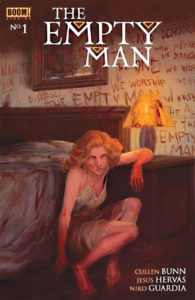 There is an outbreak of a disease called “empty man” happening, according to news reports. People are hallucinating. At first, people see distressing images, but soon the visions become more awful, leading to a catatonic state and then outright violence against themselves and others. They claim to see The Empty Man and follow him religiously.

Issue No. 1 opens with a family at the dinner table. The mother decides to eat an apple, but when she looks for a knife, the father has taken them away. He tries to calm her as she becomes outraged. He sends his daughter to school, telling her everything will be all right. His wife goes upstairs, and when we see what she’s done to herself and the room, we know everything is anything but all right.

At school, his daughter and her friends talk about what’s happening in the town but are interrupted as “Men in Black”-type government officials show up. They’re given lists of questions about their families, as well as their neighbors and friends.

That’s all I’ll tell you about this book, as I’ve probably already said too much. It was written by Cullen Bunn with art by Jesus Hervas. Vibrant colors give the dark story a scary feel. This was a great read, and I can’t wait for issue No. 2.