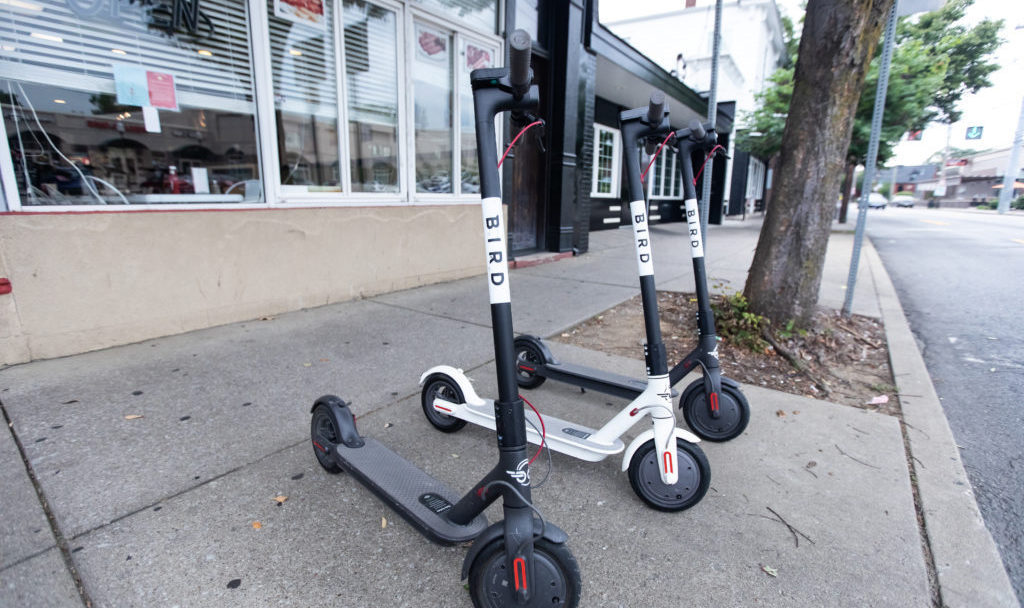 Bird scooters stationed on the street. | photo by Kathryn Harrington

If it seems as if the streets of Louisville are overrun with Bird scooter riders, but not so much with LouVelo cyclers, that’s because they are.

Bird is outflying LouVelo in ridership, according to city numbers.

LouVelo, which has 305 bikes to Bird’s 100 scooters, has never seen monthly numbers as good as has Bird, according to the reports supplied to the city and provided to LEO through an open-records request.

While significantly more people are riding Bird scooters than they are LouVelo bikes, that did not seem to eat into LouVelo’s month to month ridership — it didn’t change with the arrival of Bird.

LouVelo is a bicycle sharing program operated by the city through a contractor, and Bird is a privately-owned business based in California.

The city has committed to appropriating $50,000 per year for the LouVelo program. To get it started, the Metro budgeted $273,000 and received $1.1 million in federal grants and promises of $10,000 to $20,000 annually for three years from corporate sponsors.

After reading an earlier story in LEO about the Bird and LouVelo, local resident Michael Hopper observed that, “By my math, $1.5 million so far could have given away more than enough bicycles to local citizens to generate more than 53 trips a day.” (The average for September).

We estimate that if the city really has spent and received $1.5 million for the program, it could have bought 3,000 or so $500 bikes for citizens.

Bird swooped into Louisville in July (although it was briefly kicked out before striking a deal with the city). LouVelo launched at the end of May 2017.

A city official interviewed two weeks ago welcomed the potential arrival of more LouVelo competitors, saying that the city was happy to provide options for riders.

“I mean, there are people who, for instance, might favor riding a bike because of the expertise involved as opposed to getting on a scooter that does all the work for you,” said Harold Adams, a spokesperson for the city Department of Public Works, which administrates LouVelo. “And then, of course, there are people who would favor the scooter for the very same reason.”

Plus, there’s always the environmental and health benefits of riding a bike, one reason the city has cited in the past for being so eager to get the LouVelo program started.

So far this year, the program estimated, it offset 3,953 pounds of carbon and helped visitors and citizens burn 253,699 calories, according to LouVelo’s September report.

It can be less expensive to rent a LouVelo bike. It costs $3.50 to rent the bikes for 30 minutes, while it would take $5.50 to ride the same amount of time on a Bird scooter given the service’s fee of 15 cents per minute, plus a $1 cost to activate it. But that depends on how fast you go, and Bird scooters can shoot up to 15 mph. Then, again, LouVelo offers day passes and other packages, as well as monthly and annual membership options.

Matthew Glaser, general manager of LouVelo and (not coincidentally) a bike enthusiast, maintained his optimism earlier in October that bicycles had secured a place in Louisville’s transportation landscape.

“It makes it easier and quicker with parking, it’s great for your health and boy, it’s fun,” he said.

LouVelo’s pummeling may not be over, though.

Lime, another electric scooter company, has announced its intention to apply for a preliminary permit to operate in Louisville. Bird’s application for a permit is under review, although it’s still allowed to operate within the city in the meantime.

Four companies will be allowed to operate in Louisville in total, in accordance with a new dockless vehicle policy announced in early-October.

And we’ll be here to watch it all.

Per the policy, companies are required to report their trip numbers to the city, and Robin Berry, an employee in the city’s Office of Records Compliance, said in an email that Bird’s numbers, at least, would be posted to the Metro’s open data web page.