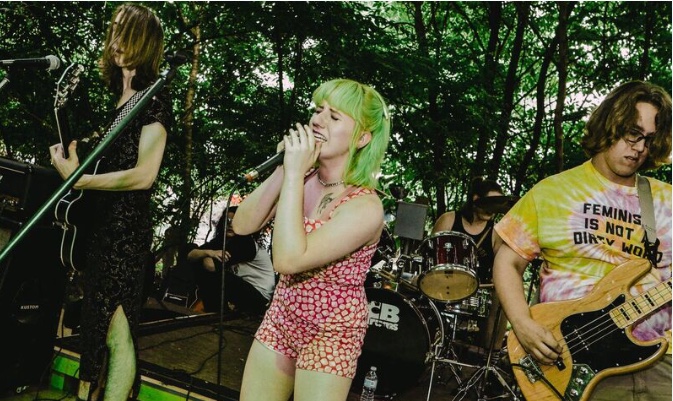 Before the Punk In General Fest, LEO caught up with one of the more than 20 bands performing, Zerg Rush, who describe themselves as a “party punk five piece” who “represent the angry young adults that just wanna have some fun yet encourage hard thinking.” Local punk luminary Sean Garrison (Kinghorse, I Have A Knife) spoke with Zonny Mondo, singer of Zerg Rush, about the festival, conversion-to-punk moments and who should be brought back from the dead just long enough to be punched in the face.

Sean Garrison: So what do you want all the fine people of this grand metropolis to know about PIGfest?
Zonny Mondo: Punk in General Fest is a nonprofit, all-ages, DIY punk fest with as much Louisville weirdness as we can pack in two days. We want to cycle money back into the scene and give nonlocal bands a taste of Louisville’s finest, in hopes to bring more attention to the city’s underground.

Who are your favorite bands on this bill and why?
Personally, I love Trouble on Two Feet for keeping that classic ‘80s punk sound current, Kids Born Wrong with their unique, fuzzed-out rock ’n’ roll; Dope Sweater with their chaotic stage presence; Belushi Speedball, for obvious reasons; and the Orchard Keepers for their undefinable sound that keeps you feeling wild.

I don’t know if this happened to you, but punk was something I became and was never quite able to escape. Is this something that happened to you? Did you have a conversion moment?
Ah yes. The punk transcendence was a power move for most, since it’s the best way to start giving a shit about the things worth caring about. It was around eighth grade that I was snotty and angsty enough to shift from Fugazi to Minor Threat. Self-confidence skyrocketed and clothing deteriorated after piquing an interest in what my old man listens to. Growing up in a house with a wooden half-pipe in my backyard with an old-fashioned skate punk for a father could only lead into the reforming of another would-be ‘80s teen. It all started when I dug out a beat up DRI cassette.

If you could play with any band from any historical era, who would it be and why?
Personally, I’d love to play with the Talking Heads or Devo in the ‘80s. They are both unconventional punk bands that have a very unique sound, image and stage presence that I am undoubtedly influenced by. Not to mention their messages being far more than just get angry and get mean. Being able to be a part of the underground ‘80s scene and playing places that became iconic before their recognition is a culture I would have loved to be involved in. Zerg Rush is fueled by the spirit of Bob Dobbs and Max Headroom, and that isn’t something people get to or want to indulge in nowadays.

Do any of the members of Zerg Rush do visual art or any other type of radical shit?
The other Zerg boys preoccupy themselves with more musical endeavors. Pilotplane is Brett Zinger’s rap project, Pizza Life Crew is fronted by the synthesizing Evan H., Bamm Bamm Zingo beats his drums for Trouble on Two Feet and Ben “Zappy” plays in Shark Sandwich and The Happy Yew. Bamm Bamm and Zinger are starting up a sister project called Big Fellas, too. Personally, I do a lot of psychedelic-inspired ink work and acrylic painting, but typically it’s only for myself and close friends, since I don’t intend on profiting off of it.

If you could digest only one type of food which food item would you choose? I know that it’s not really a situation where you willingly would have such a condition, but humor me. Also, could you write a longer answer than is required so I can easily make my word count?
If I could only digest one type of food it would probably be fruit. Fruit has no business being so healthy and tasting so good. Specifically though, I’d choose mangoes because they have the perfect texture and a very specific flavor.

I saw Zerg Rush a few weeks ago and was blown away by the energy and charm of the band. What are you going to do if you get a chance to become huge?
As long as we don’t have to change for anybody, I think we’d jump on the opportunity. Me and the other Zergs would love to be able to see the world by sharing our music with it, but we’d always stay genuine to our sound and our image. We make music to be mad at the right things, but still give people a good time. If that’s something a lot of people want to be exposed to, then we will deliver.

If you could bring any musician back from the dead just long enough for you to punch them in the face, who would it be and why?
GG Allin didn’t get his ass beat as much as he deserved. •