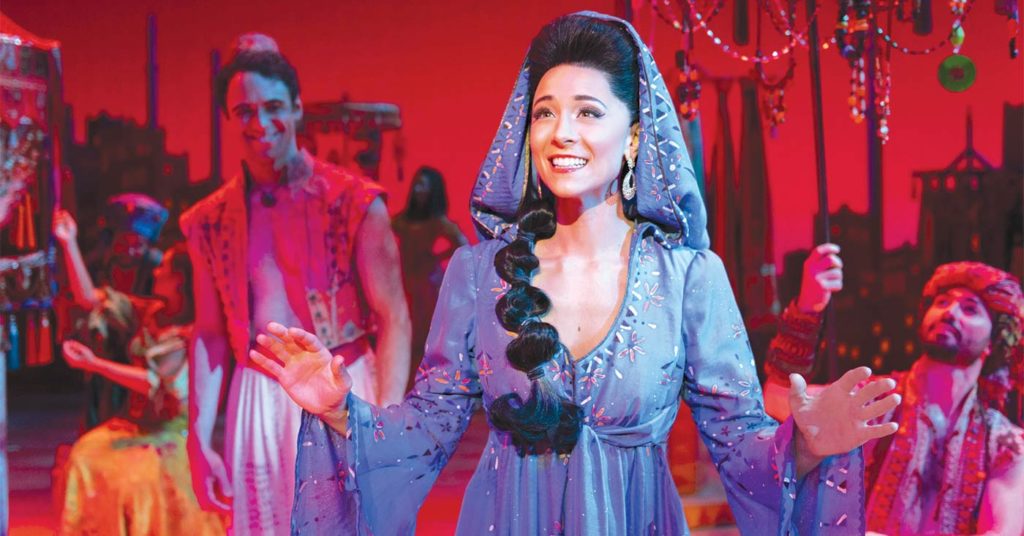 Like so many in her generation, Lissa deGuzman grew up watching “Aladdin,” among other Disney movies. For her, it was more than just a fun movie. It was a family experience.

“We’re a big family, and we would always drive down to Florida for Easter vacation,” she recounted. “We’d stack our pillows up and put a big TV right in between our parents in the front, and we’d watch Disney movies. I remember watching ‘Aladdin,’ and I remember my dad always knowing every word to every song, even though he never saw the actual thing, because he was always driving.”

So it was something of a dream come true on Aug. 8 when deGuzman took over the role of Aladdin’s leading lady, Princess Jasmine, in the North American tour cast of the Broadway musical production of “Aladdin.”

“It’s still unbelievable to me. When I got the call that I was going to play Jasmine, I screamed and I said, ‘No way.’ Especially just growing up with such a strong figure: a model of beauty, brains, fight, drive, passion and love. I never in a million years thought that I would be able to portray that on stage at my age. I still get excited about it, I don’t think that will change.”

She’s actually been with the tour from the beginning, along with her brother, Mathew deGuzman. They began as swings, members of the company trained to “swing” in to cover any ensemble roles if needed. That meant she had to have not just one or two roles down, but all the female roles. She also understudied for the role of Jasmine. Now, a year and a half into their run, deGuzman is playing the iconic Disney princess full-time, and her brother is a dance captain as well as a swing.

It was actually Mathew deGuzman’s theater career that got Lissa interested in acting. “He’s nine years older than I am, so as a kid I went to all his shows and loved it. We went to his college shows, to his tours.  We went everywhere. It took me until about junior year of high school to accept that I loved it as much as he did and that I had the possibility of pursuing it. He has been so helpful on this tour and when it came to picking colleges … I’m really grateful for how he paved the way.”

“It must help to have an older sibling who’s already in the business,” I suggested when I spoke to her, “so your parents kind of know what to expect.”

“Absolutely,” she said, “and proves that success can and does happen for those who have the heart and the passion and the drive for it.”

With new adaptations comes the opportunity for contemporary revisions. Many musical adaptations of well-loved movies expand on the original material, adding new songs and sometimes new characterization. “Aladdin” is no exception, though fans shouldn’t worry about losing their favorite moments.

“We have all the songs from the animated feature,” deGuzman said, “and the musical version is enhanced with some restored songs that were originally written for the movie. And we have new songs. Jasmine has this discovery song about not taking ‘no’ from her father anymore and discovering more. And then she has a song called ‘A Million Miles Away’ where she gets to know Aladdin in their first understanding of each other. So she gets more songs and more moments of discovery and journey, but she also has that iconic look. It’s really everything you could want plus.”

Jasmine is a favorite Disney princess for many and for good reasons, deGuzman said. “She has so many things working against her. There’s her father who’s set in his ways and Jafar who’s definitely set in his ways. Then you have social status and societal standards, but she refuses to just settle for any man or let a man be the boss of her. She’s taking control of her life. I love her unwillingness to settle and her fearlessness and drive to leave the palace and discover the market place.”

Even Disney princesses are susceptible to pre-show jitters, however, and deGuzman is no exception, though she has a smart way of conquering them: She turns to the rest of the company. “I like to visit the ensemble, the swings and the other leads,” she explains. “I check in and give them kind of a metaphorical handshake or high five before we go in this show together. It’s a journey we’re all going through together. We have to be together in order to tell this story of heart and humor and love. That calms my nerves, knowing there’s a solidarity vibe to it. And then the overture starts and the excitement and energy lifts and it’s amazing.”

And what’s it like to be on tour, to not just perform this show night after night but in cities all over the country? According to deGuzman, it’s been one of her favorite “Aladdin” experiences.

“It definitely took me a while to learn how to minimize my stuff in my suitcase, but it’s helped me learn what I need to feel at home in every city. And it’s helped me explore so much. We only get to be in these cities for two weeks, so our time can be limited and I like to go to the museums and specific breakfast places and see all the sights.”

DeGuzman’s time in Louisville may be limited, but she already has plenty of museum and restaurant recommendations, thanks to a local in the company. “One of the male swings and our dance captain, Michael Callahan, is from Louisville. So he’s very excited and he’s been prepping us and telling us everything.”

Disney’s “Aladdin” opens tonight as part of the 25th season presented by PNC Broadway in Louisville.