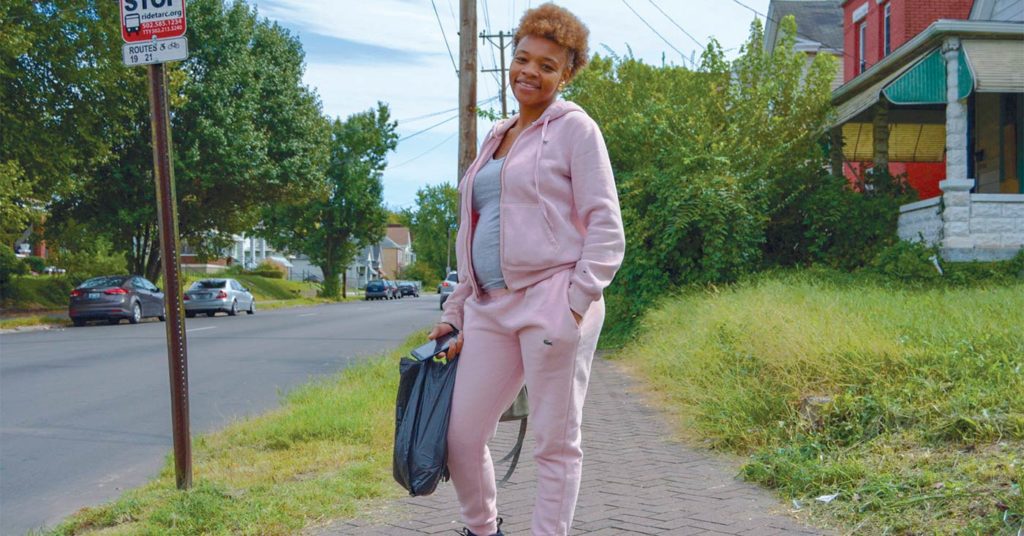 “I’ve been here since 2006. The impact that The West End has had on my life has been bumpy. Sometimes, they’ll do good for the community. There’re also too many abandoned houses that they could do something with, and they’re always taking things away from us. They closed down a lot of boys and girls clubs. I grew up in those. For years, my granny used to work in one of them. I hate that they’re gone. That’s why the kids are out here.

I used to hang with the wrong crowd and get into stuff. I was young and out here in the streets. I can now say that I’ve improved a lot. I graduated and got my high school diploma, with a child. A lot of people aren’t able to do that. I went to TAPP, a pregnancy school, which helped me a lot. They helped me graduate with my regular high school.

My daughter is getting ready to be 7, and I’m pregnant again. I was 15 when I was pregnant with my daughter. I’m 23 now. It was kind of hard and a bad experience, but I had to mature and make some changes. There were times when I wanted to give up and not go to school, but I still went. It was hard but my granny stayed on my back. If she didn’t do that, I’d be out here in the streets.

I got kicked out at 17. I had a bad attitude and shit like that. I was always welcomed back home, but I had to stay out of the streets. When I came back, I chose to stay home and do school work instead of being out here. It was always tough. My choices were to go to school or be out in the streets. It’s your main two options in The West End. I got accepted into college, but I had to deal with my daughter. I was too young. Now that she’s older, I’m wanting go back to school. It’s a wake-up call, now that I’m older. I had wake up to reality and snap back.

Being a teen mother was hard, especially when you’re doing everything on your own. My daughter’s father was there in the beginning, for a few months, but then he wasn’t. He was about that street life and we were both really young. I had no choice but to be independent and keep working hard for my daughter.

My strength comes from my family. I had a lot of support and a lot of help. Most people don’t have family. They just have themselves and their child and have to go sleep under bridges and at shelters with their baby.

When you stress more, you won’t find where you’re trying to go in life. It’s harder when you’re always stressed. Just stay on the right path. If it’s a goal for you to achieve something, make sure no one is in the way of stopping you from reaching it. If you’re a teen mom, stay in school, and don’t let anybody steal your shine.”

“Ironically, the highest and lowest times of my life come from people. The highest points of my life are when I’m around my family and friends, creating good memories and good times. My lowest points come with the drama that come from around here, being around enemies and beef. It’s like a double-edged sword.

My story is similar to every other young black male or female. You come from the bottom, and you want to get to the top. We lost a lot of people along the way. There’s a lot of people locked down, and there’s a lot of people that are no longer with us. You know, just another example of a young black man, with no father. You know the story. I’m just trying to make my ending different than so many others before me. So, it’s just that rags to riches, in America, story. You put that out, we all are going to understand it, especially if you’re from here. Everybody’s trying to make it.

My biggest success in life is making it past 25. I’ve done a lot of things. I’ve done shows with people and made a lot of money. I did all that materialistic stuff, but at the end of the day, my greatest accomplishment is still being here. There’s a lot of people that I know, that I thought would still be here, and they’re not. So, I have to tell their story, too.

What inspires me? Besides the fact that I have a little girl to look after, I just want to work hard. I would like to come and give back to the place that I came from. I’ve seen so many people that are in the same boat as me. You’ll walk around and see people that you know, from around the block, living the same life as you. I just want to look out for them.

Never give up. Live legendary. Live every day like it’s your last because it just might be. Never forget where you come from and, for damn sure, don’t forget where you’re going. No matter what, love and peace conquer all. There’s a lot of drama out here but you have to remember that it takes more strength to love than to hate. Believe that. That’s pretty much it.” •