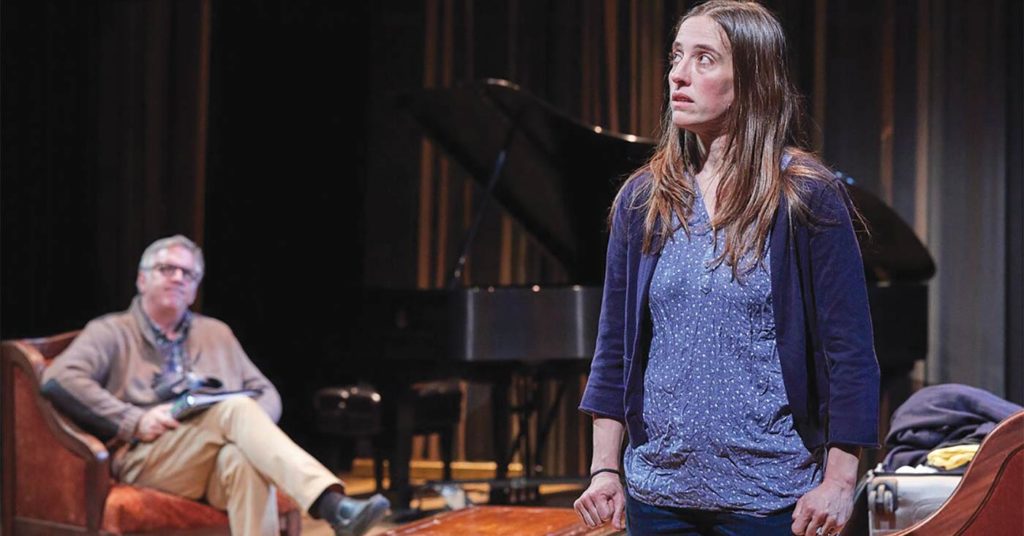 The lights go up slowly in the beginning of “A Feminine Ending,” the opening show of Theatre [502]’s 2018-2019 season. It is a soft beginning, a “feminine beginning” as the main character Amanda Bloom (Tamara Dearing) explains, though this is usually a term that applies to music. “It is known, by the few that know enough to care and care enough to know, that any piece of music has one of two beginnings. They are gendered.” Masculine, which starts out with a strong stress on the first beat, and feminine, which emphasizes the second or third beat. If you’re frustrated to hear these archaic gender roles applied to music (or plays), rest assured that Amanda is, too.

That’s sort of the point.

Amanda is a brilliant composer, the girl who made it out of her small town, who’s going to have an extraordinary life… but, at 25, she’s writing advertising jingles and planning a wedding while her fiancé, Jack (Cody Alexander), easily finds fame in his own musical career. Once she was passionate and convicted, unafraid to be weird. As a child, her mother (Jan Louden) gave her an oboe because “no one plays the oboe.” As a young woman, Amanda is uncertain and afraid to make bold choices and be seen as a “bitch.” No one plays the oboe. She’s become so reserved in her own music that she’s putting off work on her symphony and struggling to write a personal statement for the Spring New Voices competition in which she’s a finalist.

This struggle between finding her own voice and making everyone else in her life happy is something that women artists know too well, and the playwright, Sarah Treem (cocreator of Showtime’s hit show, “The Affair”), hits the nail right on the head, probably because she knows. The director — one of three directors being introduced by Theatre [502] this season — is also a woman, Rachel Vidal, and even the cover art for the program was designed by a woman mixed media artist Ashley Cathey. It’s these female creatives, along with Dearing’s purposeful, lyrical performance that make this play resonate so honestly.

It’s also honest in its portrayal of young adulthood, from the uncertainty about the future to the awkward change in relationship with your parents. These are common, human feelings but the play does well in showing that there are pressures Amanda feels that the men are simply oblivious to. Her father (Sean Childress) rambles on for minutes about newspapers, while Amanda waits in frustration to tell him her mother left him. Jack doesn’t seem to understand why Amanda can’t just compose, or why she isn’t having a great time while his career is taking off. Her high school sweetheart, Billy (Louis Robert Thompson), offers some discussion and encouragement that seems well-meaning, but is mostly to get into her pants.

In one of the most poignant moments, Amanda asks, “Name one female composer.” Her father can’t, and I can’t, either. It’s not that they don’t exist, but that it’s hard to make it as a famous female composer and harder to “have it all,” career fulfillment and love. Perhaps that’s why so many great female artists throughout history remained “spinsters,” to free themselves of responsibility to anyone but their art. Amanda says at the beginning of the play, “I want to be happy” and ends by saying “I’m afraid.” There are no answers to be found here.

Except… throughout, Amanda talks about a recurring dream in which she plays hostess to great male composers and can’t help but feel that someone is missing. In the end, she has the dream again, but this time she notices women in the corners of the room. She takes her oboe and begins to play, and all the women start to dance. If she plays forever, she wonders with an ache in her voice, maybe they’ll stay. Maybe that’s the key: women in art lifting up other women in art and in life. •

‘Solo Mio Round One’ at Actors Theatre

When an actor does a 10-minute solo play, who or what becomes their scene partner? In theory, there is no scene partner. But if the actor is creative, they can make scene partners out of members of the audience, props or an unseen duck in a tree. They might even play multiple characters in the same scene. All of this, and more, was in display last Wednesday at ‘Solo Mio Round One’ at Actors Theatre.

There were six short solo performances, each with a director and dramaturg, but no writer. Instead, the performances were created from scratch by the acting apprentices with the Actors Theatre Professional Training Company, or PTC. They ranged from riotously funny, as in Camp Dan performed by Brett Schultz, to haunting like “Xiaoyan” (Rebby Foster) or “Beef” (Rasell Holt) to something akin to a Black Mirror episode such as “:)” (Kevin O’Connell). In addition to energetically raw acting, most pieces incorporated music and sometimes dance without quite moving into “musical” territory. There was also an impressively structured lobby display, which showed, with scraps of paper and red string, many of the inspirations and notes that went into the creation of each piece.

The creativity inherent in the concept and the promise of these new actors created a buzz of eagerness to see what the PTC does this year. The production only had a two-day run, but if you missed it, don’t worry. There are two more “Solo Mio” rounds to come: one on Oct. 19-20, and the final round on Nov. 2-3. There’s also the PTC New Play Project, “And We’re Live,” to look forward to on Oct. 8-9, hosted at WAVE3 News.

And if performances were any indication, we’ll be seeing these actors in future seasons after they’ve finished their training. •