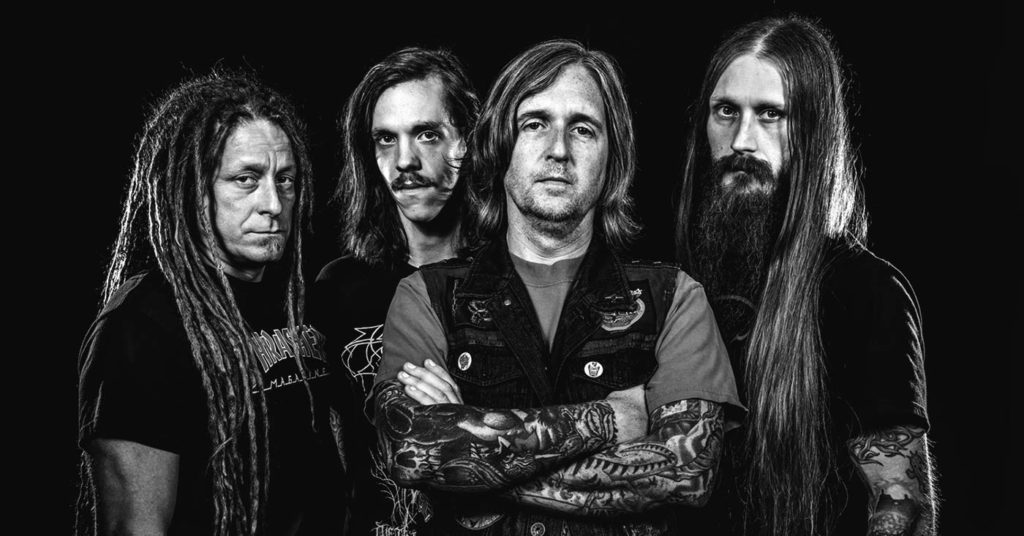 Metal isn’t often celebrated for its sensitivity or timeliness, but the Stonecutters see things a bit differently. In the aftermath of losing friends in the opioid epidemic and mass shootings, the band believes in the importance of “being vocal and talking about these types of things.” Brian Omer, guitarist and singer, co-wrote Stonecutters’ newest single, “Carved In Time,” with fellow member and guitarist Nick Burks in direct response to the 2015 Paris attacks. “It was my reaction to being helpless in the situation, but wanting to help,” Omer said. “I think a lot us feel that way. We seem to have a lot of catastrophes like that now. It tends to affect us and we like to sing and write about them.”

“Carved In Time” opens rather cinematically with an early Maiden-meets-Pantera riff foisting itself upon the listener — a premature eye of the real storm for what’s coming. Cue the mid-tempo stomp, the grinding guitar, the primeval pummel of drums. Omer and Burks, each with different but complementing singing styles, deftly trade off vocal passages. Somewhere near the middle of the song, Stonecutters lean hard into their thrash influences, pouncing with a breakdown hard enough to cut diamonds, and complete with a solo that might provoke Jeff Hanneman to sit up in his grave and headbang.

“Nick had taken a trip to get tattooed in Rhode Island by this kind of famous tattoo artist musician of this one-man band Leviathan, Jef Whitehead,” Omer said. “Nick wrote the opening riff in the hotel room on vacation to get the tattoo and he came back and we completed the song together. It came together fast but we think it’s a strong song and thought we’d throw it out there as the first track to be streamed. It got a great buzz right off the bat. We’re really happy with the reaction.”

Artists of all mediums foster a concern over their legacy and Omer is no different. Can the art left behind outlive the artist or will it simply perish with its creator? “Like I said, I started writing it in response to the Paris attacks but it has some deeper meaning too, about the idea that the song outlasts the writer, hopefully,” Omer said. “That the music will hopefully live past after we’re gone. I kind of want that. I want to write strong material that will last and do the best I can.” So, while the Stonecutters may or may not ever reach the status of some of their influences, such as Megadeth or Slayer, an offering like “Carved In Time” certainly feels like it deserves a place among the pantheon of celebrated metal songs.

One thing that caught my ear was the song’s impeccable production value, especially the fat, thick punch of the guitars. While some of this is no doubt due to recording their latest album at La La Land, Omer heavily credits the extra crunch to something else: “We switched from Marshall to Engl heads, and they make the guitars sound just thunderous. I mean I still love and have my Marshall but the Engl head, yeah, really put it over the top. It really made the guitars sound just brutal.”