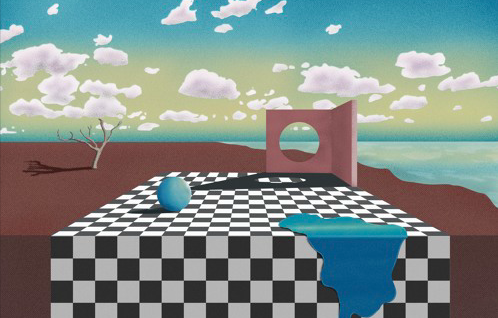 Andrew Rinehart — ‘Interdimensional Nonconversational Inconsequential Love’
I’ll be goddamned if Andrew Rinehart hasn’t crafted one of his catchiest songs yet, a feat in light of his previous work. With an almost rapped vocal delivery, there is a definitive busy-ness to the music that pulls you in. There is a sarcasm that runs just underneath the surface, a sardonic wink that tells the listener that Rinehart, like the audience, is just as confused by the overwhelming influx of information as the rest of us. That flood of information is personified by his voice, which is laid gently above the platform of a hook-heavy pop melody, a kind of Cars or early-Weezer-era rock that leans into big synths and even bigger ideas.

Prayer Line — ‘A Martyr’s Death’
Big riffs and austere ideas are the centerpiece of what makes Prayer Line hit so hard. The bass drives, the drums plod and the guitar work is thoughtfully crafted to give the vocal melody room to breath, but to also add an almost Duane Denison (Jesus Lizard) or Roland S. Howard (The Birthday Party) touch to the music — a creeping, spidery weirdness that serves the narrative. As described in the title, the song is a nod to horror movies of yore, more slasher flick than psychological thriller. “A Martyr’s Death” is a big song with shimmering guitars and barked, almost crooned vocals, here by Never Nervous head Phil Olympia, that make no bones about their interests, playing for the bleacher seats and having fun while they’re at it.

The Deaf Index — ‘That Goddamned Cat’
Gritty, weird production is at the core of “That Goddamned Cat,” an instrumental piece of hip-hop adjacent to industrial that emphasizes ferocity. This is heavy and strange, a little Front 242 or Meat Beat Manifesto four-on-the-floor madness, filtered through a touch of Rammstein and a ton of eBaum’s World. If you walk away wondering what happened here, why someone would have this much vitriol for a cat, you’re like the rest of us, adrift in a world that seldom seems to make much sense. There is an epic tension to the music that implies that you should be scared. Whether that’s of this fucking cat, or the lady so clearly riled by the presence of the animal, well, that’s up to your discretion. Go into this blind and expect an almost Trent Reznor-esque presence and you’ll walk away satisfied.

Rob Lee — ‘Voodoo’ (feat. Gio El Futuro & SEMI)
Voodoo features all the heavier aspect of acts such as The Weeknd and an equivalent pop appeal, sultry, but not necessarily sexy. This is contemplative music, the kind of melancholic reflection typically reserved for sadder songs. An odd moment at the refrain of “What is this voodoo / That you do  /  And now I love you.” Is that a bad thing or a good thing? The answer to that is subjective, but that’s what makes it a compelling track.

Rmllw2llz w/Fiji Waters — ‘My Way’
Rmllw2llz has the answers to the questions you weren’t asking. Working with Fiji Waters, who offers a remarkable hook, there’s an elegance to this track that cannot be ignored. Romell capitalizes not only on his own well-earned cred, but the experience that he’s lived as an emcee who’s been hustling for a minute. This is not only classy, but classic, a throwback in many ways to simpler times, like the very best of late-‘90s hip-hop. As such, you can draw comparisons here between elements of the Wu-Tang Clan meets the soft croon of Mary J. Blige, incredibly cool and offering up the kind of wisdom worth contemplating.

Kogan Dumb, Mmuso, and Kamar Ruvon — ‘Who’s That’
The lyricism that Kogan Dumb brings is matched only by his alliterative delivery, an explosive, heavy spit that adds a Cappadonna-esque flow. With a chorus calling out the emcee as someone worth knowing, Kogan and his peeps, here Mmuso and Kamar Ruvon, offer a dirty south hip-hop style over top of the kind of cool classiness that producers (and former collaborators) like Axel Roley bring to the table. You can easily imagine drinking something brown and on the rocks, dressed to the nines and sitting at a table lit only by the flickering neon above you. Kogan and company offer up that kind of transportive experience, an opportunity to live life on the flyer side.