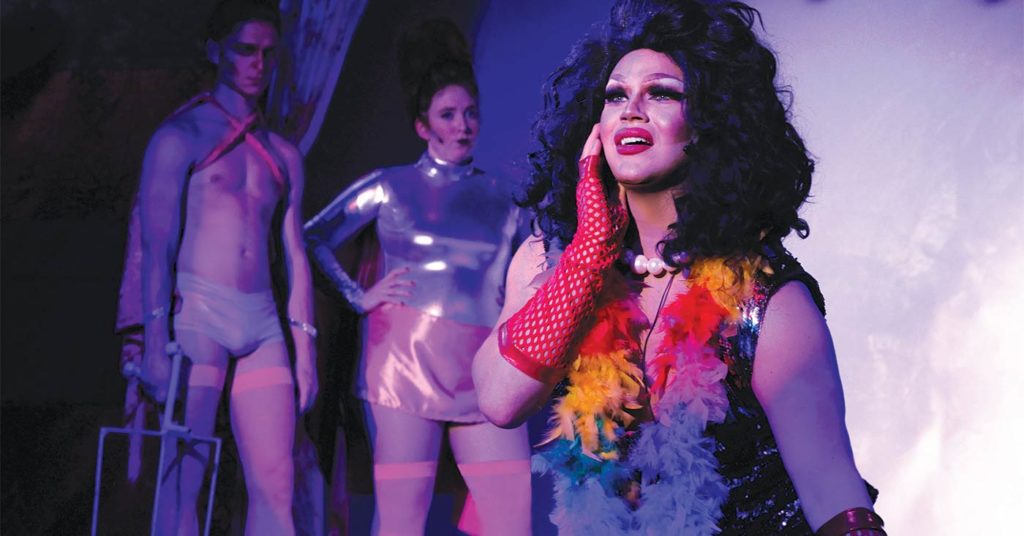 The Speed art museum room was so full that there was barely even a place to stand. There were previous members from The Vogue Theater’s old shadow cast, throngs of students and entire families. People, a range of ages, races and interests: Some dressed up to theme and were brash and extroverted, while others were reserved, “Rocky virgins” who looked a little unsure. But the closer it came to showtime, the stronger that common feeling of, well, anticipation. Finally, the lights went down, those famous red lips appeared on the screen, and the crowd shouted responses to every line of the opening song as if there was a second script just for them.

That’s the magic of it.

The 1975 cult classic “The Rocky Horror Picture Show” isn’t a movie that you watch at home with your cat. It’s something that has to be experienced. Loudly. Communally.

The screening at Speed Art Museum’s After Hours event honored the 20th anniversary of the closing of the beloved Vogue Theater, which showed raucous “Rocky Horror” screenings for over 20 years, complete with a live shadow cast performing in front of the screen. Now, however, the current shadow cast speaks to a new “Rocky Horror” tradition. It’s performed by Acting Against Cancer as a preview for their full-stage version of “Rocky Horror” opening in just a few days at PLAY Louisville, a production with promise to be as wild and decadent as the fans who show up.

Remy Sisk, the artistic director of Acting Against Cancer, also plays Rocky. While you couldn’t really hear him at the screening (he’s not a character of many words anyway), his facial expressions did a great job portraying the confusion and uncertainty of a newly-born muscleman who doesn’t really know what’s going on, but is kind of turned on. Sisk admitted that the first time AAC performed “Rocky Horror” in 2014, he didn’t fully “get” it.

“When we closed the show, we thought we might do it again, but we weren’t certain,” he said. However, when Halloween 2015 rolled around, the company did bring “Rocky Horror” back, on a smaller scale than their original Henry Clay Theatre performance. The company performed in Central Park, donning the trademark, scantily-clad costumes with temperatures in the 30s. “That performance was such a blast and helped me, as an actor and a director, really begin to understand what our ‘Rocky’ looked like,” he said.

When it came time to expand the show, Sisk approached Micah McGowan, the co-owner and operator of PLAY Louisville. “[McGowan] was passionate about Louisville’s nonprofit scene and would often host community events in PLAY’s theater … he was immediately on board. He and the entire PLAY staff were so insanely supportive and kind to us as we brought in more of a live show than that space had ever seen. I’m talking over 12 live body mics, multiple tubs of props and specific light cues. Doing the show that year at PLAY instantaneously felt like home for ‘Rocky.’” So much so that after what was meant to be the only show that year, McGowan asked AAC to come back the next weekend for another performance.

PLAY Louisville is, probably above all else, a safe space where LGBTQ folks can enthusiastically be themselves, and “Rocky Horror” — whether screenings or stage productions — has offered the same to Louisville and around the country for decades. In one new addition to this production, the cast often covers Rocky in a Pride flag rather than the red sheet used in the movie. “Rocky Horror” is not a perfect story (in today’s society, it’s a bit unnerving how little consent factors into Frank-N-Furter’s “give yourself over to absolute pleasure” mantra) nor is it trying to be, but it is a story — and a cult following — that celebrates those often “othered” by society and encourages being honest and unapologetic about who you are.

There’s also a great cause behind this production and, for that matter, everything Acting Against Cancer puts on. As the name might suggest, AAC is a nonprofit theater company on a mission. They’re known for putting on free productions for children either undergoing cancer treatment or with a loved one who has cancer. Through shows like “Rocky Horror” and other more pop-rock musicals such as “Carrie” and “Heathers,” they raise both awareness and funds “in support of our commitment to helping children touched by cancer,” as explained on their website.

This year marks the third year in a row that “Rocky Horror” will grace PLAY’s theater, and it even did a preview show at PLAY Nashville earlier in the month. In addition to the return of Sisk’s Rocky, this year boasts a new Frank-N-Furter in Louisville PLAY Mate Karmen Kazzi. It’s no easy task performing literally in the shadow of Tim Curry’s iconic role, but even with the movie playing, Kazzi possessed the charisma needed to captivate not just the other players but the audience. Olivia Duff had the perfect wide-eyed expressions for Janet, whether she was playing her as afraid, aroused or both. Another standout was Sara Troxel in the role of Columbia, who utilized so much character that I found myself paying more attention to her than Nell Campbell’s on-screen Columbia. It’s exciting to think what this cast can do when they have the stage all to themselves.

“The choreography has definitely been kicked up,” Sisk said, explaining his own enthusiasm for the upcoming show. “And I don’t think we’ve ever had a better group of singers for the show. We’ve already performed at PLAY Nashville this year and I’m so looking forward to doing it in Louisville and then beginning the prep work for year six!”