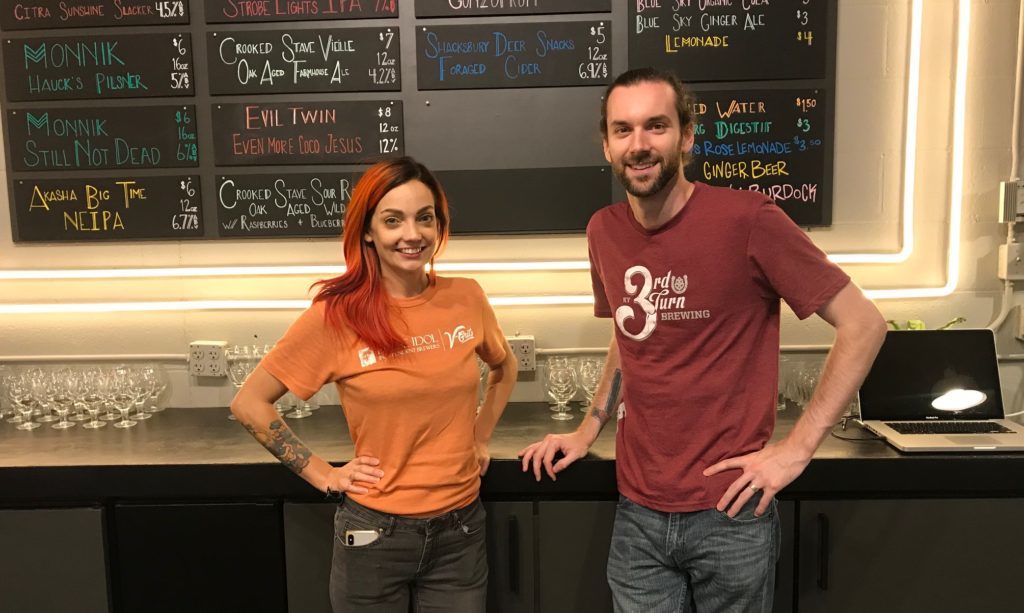 Louisville’s newest brewery, False Idol, has paired with V-Grits to open at 1025 Barret Ave., the building that once housed The Monkey Wrench. The brewery/vegan restaurant has been transformed into a bright, open space by Shawn Steele, a former brewer at Akasha Brewing Co., as well as Kristina Addington and Jeff Tennis, co-owners of V-Grits. As of now, there are only two in-house beers on the menu — with a solid variety of guest beers on tap — but Steele said patrons can expect more False Idol options soon, with a goal of having around five of his beers available at any given time. We stopped by to try the initial two beers.

Manna Kellerbier
After a rush of IPAs and other heavy-flavors dominated the craft beer scene for years, it’s now become trendy for microbreweries to produce options on the lighter side of things. And, personally, I’m glad. It increases the range of things that breweries are producing, providing options between Miller Lite and something that tastes like a shotgun blast of hops. The Manna Kellerbier is a great example: It’s mellow and crisp, but also interesting and flavorful. A refreshing, German-style pilsner, its accessibility also translates to the price: At $4, you’re not paying that much more than you would for a PBR. “When I looked up the stats for craft beer drinkers, the number one indicator of whether you were a craft beer lover was income, was wealth, and I really didn’t like that, because I want it to be for everybody,” Steele said.—Scott Recker

St. Hyena Sour Pale Ale
The St. Hyena sour pale ale is no laughing matter. There is a deep golden hue to the body, topped by a light foam head. Typically, sour beers have a high bar for admission for casual craft beer enthusiasts, featuring tart and tangy flavors that skew, at times, to be almost acidic. The St. Hyena stands apart for its careful balance of that Gose piquancy with the bittering agents part and parcel to a pale ale. This is a tightrope act in liquid form that manages simultaneously to impart a flavorful twist on a conventional sour, offset by the crispness of a pale ale. There is a dryness to the aftertaste that recalls a brut champagne, offering lightly-fruited notes offset with the heartiness of a pale ale. This is a sublime beer that, clocking in at a meager 5 percent ABV, is an imminently-sessionable beer that invites slow sips and plenty of time to savor the moment. “This one is about kind of doing something different. We were talking about how the Kellerbier was an affordable, and tasty, but safe beer — anyone can start with that beer. The sour is more of the creative side of it, more of an expression. —Syd Bishop