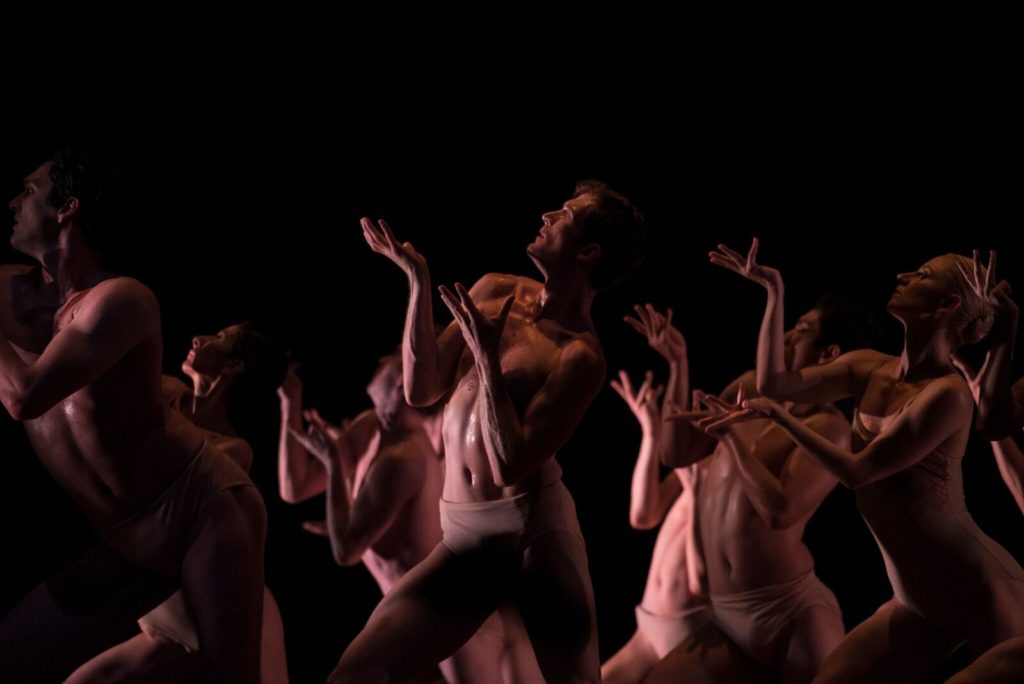 Light and darkness defined the settings of the works in Louisville Ballet’s “Mozart” program that debuted Friday at The Brown Theatre, with George Balanchine’s opulent “Divertimento No. 15” providing the former and a new work by the company’s artistic and executive director Robert Curran working with local Cambodian-American visual artist Vinhay Keo.

Mozart’s often-intricate music accompanied each dance played by Bourbon Baroque, a small ensemble whose fine and nimble playing resounded throughout The Brown Theatre and imparted the evening with a sense of intimacy. Cofounder John Austin Clark’s fortepiano performance during Ragland’s piece distinguished the evening and accentuated​ Mozart’s music.

With “Divertimento No. 15,” Curran chose an ambitious endeavor for this company, which has had a work by the New York City Ballet cofounder every year since Curran took the reins of this Louisville company in 2014.

In the bright stage lights, the kaleidoscopic swirl of Balanchine’s “Divertimento No. 15” had dancers moving with in time with Mozart’s music — often including his distinctively rapid toe work that the ballerinas performed. The arduous demands of the piece were evident as most of the company met them.

A string of solos proved thorny when several broad arm gestures and steps, interspersed with quick moves, presented challenges not all company members could meet.  Nonetheless, the music lifted dancers Erica De La O and Natalia Ashikhmina even as they met the difficulty inherent in the choreography.

Curran’s piece, which takes its title from the Cambodian word in Khmer translatedas “stain,” developed more like a theatrical work. It opened to a dark stage, with bright, white lights swinging just offstage. A group of dancers tightly gathered on center stage, apart from a still figure off to the side standing like a god or idol.

In a period of long silence, the dancers huddled, displaying symbolic and distressing gestures. The swinging lights faded, but the darkness remained. Sometimes, one person ventured from the pack toward the figure.  As Mozart’s music began, so did a metamorphosis, and Curran’s dramatic choreography revealed a moving story of captivity and duress including some beautiful pas de deuxes.

Unfortunately, the theatrically of the piece, with a confetti-like substance that fell like snow, became an obscuring feature. Like the scrolling vertical lines on an old television set, these props made focusing on the dancers difficult. Maybe Curran doesn’t want us to see his dancers. I can understand that being part of a theater company’s work, but not a work for a dance company.

Ragland’s “Force Flux” took this local choreographer into ambitious territory with a large cast where he created multiple patterns in the vein of Balanchine’s work. Highlights of Ragland’s work were the pas de deux between Natalia Ashikhmina and Mark Krieger, and Erica De La O and Kristopehr Wojtera. There was a sense of intimacy and comfort dancing between each member of both couples, and the choreography highlights that.

But, like Curran’s piece, the performance took place on a dimly-lit stage and, similarly, here there were distracting theatrical additions. For Ragland’s “Force Flux,” the designers of the Louisville architecture firm de Leon & Primmer have created works that look like ladders with rungs of LED strip lights and, at times, changed colors. For much of the dance, these works hung high enough above the dancers heads to beautifully frame them. When they then moved to dip into the space where dancers moved and changed color, they upstaged the dance company. The darkness and upstaging worked to hide the dancers.