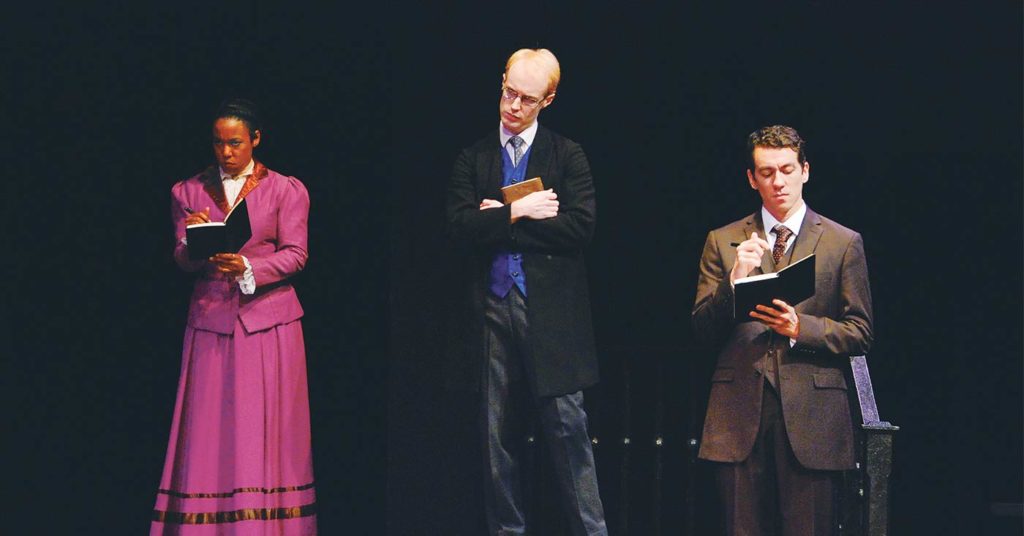 Perhaps no writer in the history of the English language has been as cruelly mistreated by history as Mary Shelley. She was a radical and progressive thinker, a feminist intellectual force and an imaginative, incisive social critic. And if one toted up the full economic impact of her work, it would certainly outweigh the combined revenues earned by the better-known men in her circle — her husband Percy Bysshe Shelley and their friend and traveling companion Lord Byron.

But “Frankenstein: Or, The Modern Prometheus” is better known as the stuff of campy horror flicks than as a groundbreaking work of fiction that delves into the world of science and ethics.

A reasonable person might look at this month’s theater schedule, see that StageOne Family Theatre is offering a production of “Frankenstein” and guess that it was going to be a slight entertainment designed to follow the typical cinematic template.

But that guess would be absolutely wrong. There’s nothing typical about this “Frankenstein.” Instead, it’s a grand piece of theatrical storytelling that delves deeply into Shelley’s ideas with wit, verve, intellectual gusto and wonderfully entertaining performances that are as rewarding for an adult audience as for youngsters. (StageOne is listing this production as appropriate for youngsters in grades five and up. There are a few powerful moments of stage violence. Note also that there is a sensory-friendly performance on Oct. 27 at 2 p.m.)

This adaptation is the first production by StageOne’s new producing artistic director, Idris Goodwin, who arrives with a burgeoning national reputation as a playwright, poet and hip-hop artist. Goodwin has a well-developed relationship with Louisville. He’s had two premieres at Actors Theatre of Louisville (“How We Got On” and “#Matter”).

At Friday night’s performance in the Kentucky Center’s Bomhard Theater, Goodwin said that his challenge as a playwright was how to adapt a 185-page, 200-year-old novel into a 75-minute stage play. He has met that challenge by distilling the storyline into an efficient, fast-paced affair that deftly uses time-shifting narrative devices, epistolary interludes and plenty of live action. He hews fairly closely to Shelley’s original storyline — and his modifications convey an inspirational enthusiasm about the delights of scientific exploration (a powerful message at a time when science often seems to be under constant, hostile attacks) and a cautionary look at what happens when scientists let arrogance and hubris insulate them from moral accountability (an equally powerful message).

This production is directed by Andrew D. Harris, and he’s put together a marvelous show that works on multiple levels.

Tony Milder plays Victor Frankenstein, a brilliant, ambitious young scientist who is obsessed with unlocking the key to immortality. In the full flower of his youthful intellectual power, he’s a university student whose fellow students (played by Zachary Burrell and Candice Handy) are both awed and annoyed by Victor’s intellectual prowess and his arrogance. Goodwin forges sharp exchanges among these three to elucidate the scientific background for the story. Burrell brings emotional heft and gravitas to his role as Henry, the moral anchor of the story. And, at one point, Handy delivers a deliciously funny caricature of the Italian scientist Luigi Galvani, whose accidental discovery that an electrical spark could cause dead muscles to twitch is one of the ideas that animate the story.

In addition, we also see Frankenstein interacting with a professor — played with a wonderful authoritarian arrogance by Terry Schwab — who tries to thwart the young scientist’s work and then becomes one of Victor’s first projects.

Victor’s circle also includes a romantic attraction to a childhood companion and sweetheart, Elizabeth, played with luminous grace and dignity by Maggie Lou Rader. And in Goodwin’s adaptation, Elizabeth could be viewed as a proxy for Mary Shelley herself: She is whip-smart, and when Victor condescendingly notes that she’s the “smartest woman” he knows, she’s quick to raise a protest about the gendered nature of his faint praise. And later, there’s a brilliantly calculated piece of dramatic counterpoint that pits Elizabeth’s humane impulses against Victor’s obsessive preoccupation with inventorying the body parts he will need for his new Prometheus.

There is also The Creation, played here by Brandon Meeks, who manages to convey a blend of doomed sadness and implacable hatred at the lonely, freakish existence that Victor has created for him.

Casting is delightful and highly efficient. Handy, Burrell and Schwab all play multiple roles — and shine in their various guises, which sometimes involve very sinister activities.  Likewise, a quartet of youngsters does great work. Flynn Harris and Levi Maynard alternate performances in dual roles as Victor as a child and as Victor’s brother Will (in the performance I saw, Maynard gave a strong, confident performance). Paige Franklin and Mary Keck alternate performances playing Elizabeth as a child (Keck also impressed last week).

This is, of course, a Gothic drama, filled with tragedy and doom. And the StageOne technical crew has done a great job of enhancing the story. The sound design, by Matt Callahan and lights by Nick Dent are especially effective in building atmosphere. Tom Tutino’s scenic design works perfectly in the Bomhard. And Zhanna Goldentul’s costume and makeup design are outstanding throughout — and especially in the instance that matters most.