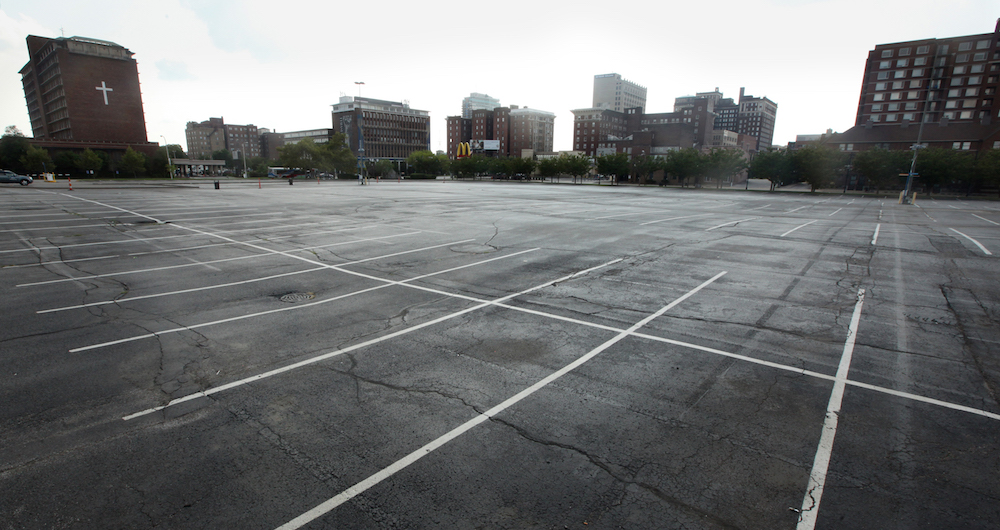 A Jefferson Community and Technical College parking lot with no trees on Broadway between First and Second streets.

And under the six inches of concrete that make up the parking lot where East Chestnut Street turns into Baxter Avenue (and where The Flea Off Market and the Phoenix Hill NuLu Farmer’s Market are held), Magnuson imagines a forest.

On Oct. 20, a fleet of volunteers wielding diamond-toothed saws will slice the lot’s concrete into 3 foot by 3 foot sections, and then pry them up. In their place, volunteers will plant 20 trees on Nov. 3.

It’s all part of a new, guerrilla effort from Magnuson called DePave — to target privately-owned property for more climate-cooling trees. In the city’s downtown alone, there are 380 surface parking lots — many treeless.

“There’s the mindset that wants to come through and just like see everything covered with concrete and really dense urban development,” said Magnuson. “But we can’t have that without taking into account the health of our urban population, which depends on there being protected green space.”

Magnuson, the founder of Earth Church, a local nonprofit devoted to combating climate change, is not intimidated by the number of trees the city needs to plant.

“It’s not impossible,” she said firmly.

For the most part, Louisville’s tree conflict has been a massacre. The city experienced 54,000 tree casualties from 2004 to 2012, leaving Louisville with only 37 percent tree cover, according to a 2015 Urban Tree Canopy Assessment.

This has contributed to rising temperatures in the city, transforming Louisville into an urban heat island. In addition to cooling the city, trees provide a host of other benefits, including storm water retention, property value increases and even crime prevention (by encouraging people to spend more time outside), said William Fountain, an extension professor of arboriculture at UK.

City government is partially responsible for planting more trees, primarily in public rights of ways and major city arteries, said Fountain, who travels the entire state as part of his job.

Louisville passed a tree ordinance last year, requiring property owners to replace any trees lost in public rights of way adjacent to their property. But the law doesn’t address trees that are lost on private land during development. (Although three Metro Council members recently announced that they would introduce a new ordinance to address this).

Although this new awareness about the need for green has helped, DePave represents an innovative approach.

DePave started in Portland, Oregon, with a simple mission: pavement removal for urban green spaces. To launch DePave locally, Magnuson just needed motivation, which, turned out, to be a location.

The chosen parking lot is almost completely concrete. Cars are few, plants fewer. A pollinator garden and two small trees hug the side of  Fresh Start Growers’ Supply. Four more stand resolute on the opposite side of the lot, by a chain-link fence. The last sits by itself in a crate behind Climb NuLu.

The spot in the lot that Magnuson has chosen for her green space is a graveyard for trees. Piles of chopped firewood mark the area. Magnuson is focusing on a 150-foot section closest to the fence.

When matured, the trees, donated by Trees Louisville, should serve as a haven for customers at the oft-sweltering Flea Off Markets.

Magnuson still needs volunteers for the project, but she’s raised the $2,500 required to fund it thanks to an anonymous donation. All in all, the process has been simpler than expected. One of the only hurdles was convincing the lot’s owner to let her de-pave it.

Magnuson already knew the owner and manager of Fresh Start, the business  whose side of the lot she’ll be planting on, but Scott Hunt, the property owner, was a different story. Hunt is your classic businessman. In an interview with LEO, he weighed financial factors, rather than environmental, to discuss why he decided to allow Magnuson’s project. Before 2006, when Hunt owned a construction equipment business and used the lot for advertisement, he never would have dreamed of planting trees that obscured his property from the road. But now that the lot is filled with other tenants, his concern was whether it would create an ongoing maintenance responsibility for himself.

Ultimately, though, the project seemed like a net positive for Hunt: A nicer looking lot at no cost to him.

By contrast, Steve Paradis, the owner of Fresh Start, was eager to partner with Magnuson. He had considered a similar project in the parking lot, but cost stopped him.

“We are excited because it’s going to be a great demonstration of urban forestry — urban forestry or urban reforestry,” said Paradis, who lives amongst 60,000 trees on his family’s farm. “It’s in a perfect location, and it’ll show a lot of people what can be done.”

The parking lot is at a well-traveled entry into downtown from The Highlands, a perfect place for a natural billboard.

Magnuson hopes, when finished, people see the parking lot and decide they want to do the same thing. Eventually, she plans to give people the fundraising and organizational help they need to de-pave on their own.

“Everyone just needs to do their one tree,” she said. “And if we did that every year, we would have a beautiful canopy in a short period of time.”  •

To learn more or donate to DePave, go to: gofundme.com/earth-church