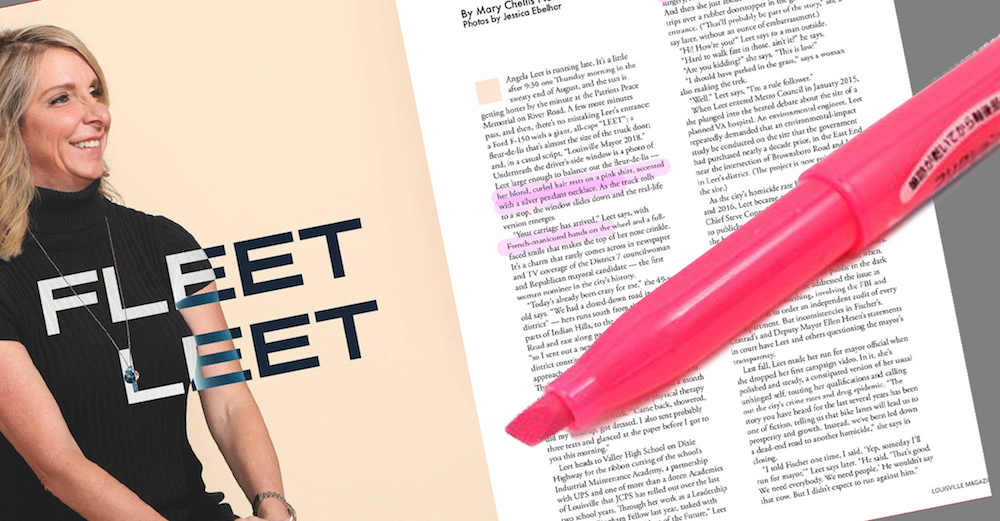 Louisville Magazine published a profile this month of Republican mayoral candidate Councilwoman Angela Leet. It included extensive — and, we say, gratuitous — descriptions of her appearance (Her “blond, curled hair rests on a pink shirt, accented with a silver pendant necklace,” her “French-manicured hands on the wheel,” her “navy, chunky-heeled Tod’s sandals” and “[b]right teal polish.”) The accompanying Q&A of Mayor Greg Fischer did not describe his looks. LEO contributor Kurt X. Metzmeier found what may be the LouMag writer’s notebook, so he gave us the rest of the story:

“Fischer’s sleepy, blue eyes are dulled, not highlighted by the pale-blue, middle-manager’s button-down Oxford. An Apple Series 4 watch peeks from under the impeccably pressed shirt’s cuff. At 60, he is fit and still somewhat handsome in a Ballard-dad kind of way, an impression that fades as his inner-dullness emerges. His pleated, relaxed-fit chinos — a plebeian touch somewhat betrayed by their discreet Burberry label — show little of the muscle-tone garnered from traveling his signature bike lanes. His look is completed with a bright pair of electric-blue Bombas socks and Sperry dock shoes.

“‘Louisville is going through a period of unprecedented growth,’ Fischer says, as his pink, never-worked fingers strum the table. ‘The new Omni hotel, $13 billion investment …’ he says, as we became sleepy in his soporific presence, noticing his small, well-shaped pink lips slowly moving as we drop from consciousness. ‘A compassionate city, a compassionate city … ’”

The notes stop here… if you can believe any of this.