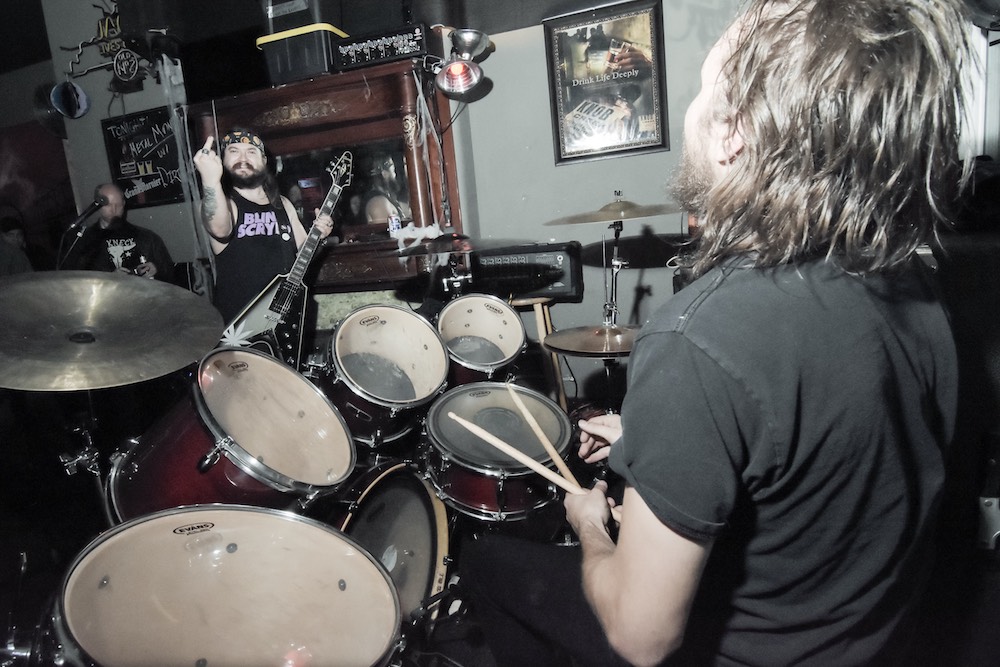 The band Dirtbag, from Lexington. (Photo by Nik Vechery)

By 10 p.m., the metalheads began to arrive at Highlands Taproom. They were easily discerned, decked out, by and large, in black and indecipherable T-shirts of black metal bands — although the best shirt of the night goes to a long-haired gentleman wearing one that read “Satanic Feminist.” The large, diverse crowd was gathered at the Bardstown Road bar for Metal Monday, a weekly concert that features local and touring bands that exist on the heavier end of the rock spectrum. The sense of community there was undeniable and immediately infectious.

“We got stoner metal, black metal, doom metal, thrash, something for everyone,” Brian Omer, who books Metal Monday, told me. “I mean, it’s just kind of anything and everything heavy. And try to keep it more underground.” Omer is also an active member of the scene through the band Stonecutters. He’s seen the audience at the event grow from its humble origin nearly six years ago. It’s a feat is he is proud of and “very happy with.”

Metal Monday is a free event and, while that might limit the amount of money some bands make for performing (“We can only promise them so much since it’s a free show,” Omer told me), it does allow them to sell their wares to larger crowds not typically found at your average Monday night gig. “We pack them in,” Omer said. “The turnouts have been really good. They pack out just about every week. Touring bands love it. For a Monday, it’s great for them.”

Metal Monday is unique in a few ways. In a city known and admired for its metal scene, Taproom is the sole venue featuring weekly performances dedicated to the devil’s favorite music. There are similar events in other cities, but Louisville’s is one of the most well-known, Omer told me. “We hear about it a lot,” he said. “We go on the road and people are talking about it all over the U.S., honestly — about how good of a thing it is.”

One reason is certainly the tight-knit atmosphere the metal fans seem to create, despite their own personal favorite genres and bands, but also because of the need it fills. “I think people are really hungry for it,” Omer said. “We get a lot of regulars, just a lot of people who love metal. It’s really become a thing here, very booming.”

Around 11 p.m. on the Monday that I stopped by, Destroyer Of Light, of Austin, Texas, took the stage. The group of hairy, hard-traveling men thundered out 45-minutes of savage stoner-groove metal, while the sea of onlookers rocked their heads in time to the music — smiles were exchanged from across the room, hair was flung. It’s apparent: The band is approved. No ears are left unrung. But this is metal. No one cares. If it’s too loud, you’re too old.

It becomes apparent that what Omer told me is very much true. Metal Monday isn’t necessarily about what band is playing, or what sub-genre they fall into. It’s about the community it offers. As the band stripped down their gear, the crowd spilled out of the Taproom and congregated again. Destroyer of Light is analyzed (“That second song was like, holy shit!” I heard one satisfied attendee tell another); cigarettes are smoked and favorite bands and esoteric albums are discussed. People compared past shows and revealed their excitement for future ones. I identify the lifers, the ones that you can count on to be there the next Monday and the one after that. They’re the ones that haven’t quite stopped banging their heads.