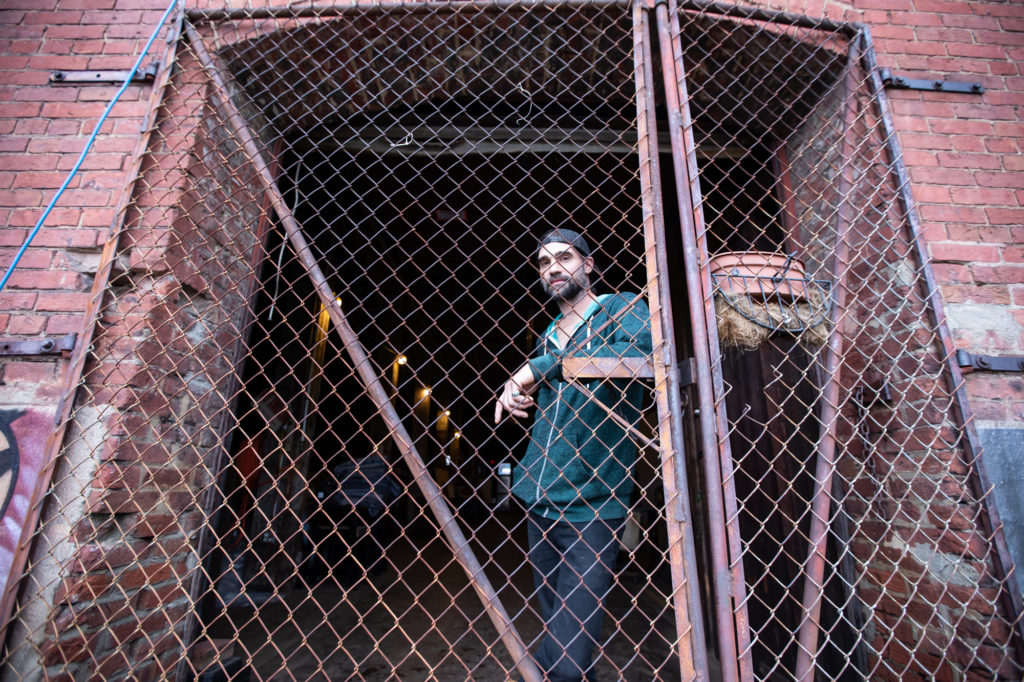 Aron Conaway outside The MAMMOTH | Photo by Kathryn Harrington

Three years after being closed by the city because of structural issues, the Civil War-era building in West Louisville known as The MAMMOTH remains closed. It has yet to become the promising, collaborative art, music and creative space that artist Aron Conaway envisioned when he bought the building on 13th Street with former partner Hallie Jones six years ago. But he and a group of artists have come together to create a plan to not only help bring The MAMMOTH back, but turn it into a unique, immersive art installation. If you’ve been to the City Museum in St. Louis, or Santa Fe, New Mexico’s Meow Wolf, you’ve seen what such an installation can be and how it can help transform a city.

“It’s been incredible to have so many people stepping up,” said Conaway.

Aside from irregularly-occurring events outside on the property — known as The MAMMOTH Garden — the 90,000-square-foot warehouse is basically just a giant storage unit at this point. MAMMOTH Storage, the business associated with the building, still brings in money and has been keeping it on life support. Before the city closed it, The MAMMOTH had 21 artist studios and several band rehearsals spaces. But the building needs structural work before it can be used again, and that takes time and money.

Currently, Conaway is working with this collective of 20 or so other artists to brainstorm ideas for the proposed art installation and working on acquiring a grant to help get The MAMMOTH open again. One will feed the other, Conaway said.

He said he believes “just to get the doors open” at The MAMMOTH would cost an estimated $20,000 to $30,000, which isn’t chump change, but it’s also not unattainable. A local structural engineer is providing a free assessment of what needs to be done to the faulty basement posts, which caused the city to shut down the building. The wood supports are rotting away, and they must be braced with concrete bases to make the building safe for use again. Conaway said the monthly overhead for the building is approximately $5,000, half of which is brought in by the storage business. The city has allowed Conaway to keep existing storage customers in the building, but not take on new ones.

“It’s a 153-year-old building. I’ve basically already cleaned out my bank account,”  said Conaway, who has a long history in Louisville of organizing artists and collectives. He once ran LAVA House, which was a warehouse that acted as a live/work space for local artists, and he owned Nelligan Hall, a social club and concert venue in the Portland neighborhood that he converted into a collective art space.

But a plan is coming together that could bring in at least part of the necessary funds to make the repairs and move toward the larger goal. The vision for the immersive art attraction is inspired by  Meow Wolf — it’s a former bowling alley that has been turned into a sort of fantasy funhouse created by 150 artists. The project has, much like City Museum, become a travel destination, drawing 400,000 visitors in 2016, its first year, generating $7 million in profits. There are several others around the country helping to provide inspiration.

Conaway said discussions for the project are still in the early stages. Using The MAMMOTH for the installation is one possibility. Or, The MAMMOTH could be a staging area for an installation, or installations, at another location or multiple locations. The goal would be to make that attraction a destination, to revitalize a neighborhood, help boost the entire arts community and possibly enhance the city as a whole.

Ultimately, Conaway realized he could not save the building and pursue his ultimate vision alone, so he put out a call for artists, a group now calling itself, by way of a private Facebook group, “Art Tribe: The MAMMOTH Collective.”

Conaway said this major installation would likely begin as a full-room project and grow from there; the collective already has looked at a couple of possible sites. He envisions the first one being something that would be open for a few weeks to begin with.

“It took me a while to wrap my head around what he wanted to do,” she said of Conaway’s ideas. “It is so massive. The efforts to bring it back to life have to be equally massive. You can feel that building breathing. It wants to be something. I really believe in that building. And mostly, I believe in Aron.”

Of course, it goes beyond just the building — it’s a bigger concept, and the Art Tribe has been mobilized in a variety of ways, such as visiting with other art collectives and immersive installations around the country, including Meow Wolf. Artists from the Louisville area bring their strengths to the various aspects of the joint projects – for Ackerman-Westmoreland, it’s at least partly organizational skills.

“I thrive on turning chaos into order,” she said.

Shannon Westerman, the former executive director of Louisville Visual Art, is another artist who is helping. He traveled to Santa Fe with Conaway to see Meow Wolf in person and visit with the artist collective that made it a reality. The hook was set.

“It blew us away, actually,” said Westerman, who also has been looking into creating a 501c3 for the project, said. “It was one of those things where you say, ‘Why can’t we do something like this in Louisville?’”

A mammoth task, to be sure. But those in the collective are believers. It doesn’t hurt that this kind of project has been done before, so templates – or at least inspirations – already exist. The goal would be to basically take The MAMMOTH, as well as the artist collective, to the next level in terms of fully utilizing the potential of both.

“The primary goal of the collective is to bring immersive art experiences to Louisville,” Westerman said. “It’s sort of the new wave, if you will. It’s really changing the way people not only view art but how they experience art. That’s what we’re primarily interested in.”

Meow Wolf has been so successful that, in 2016, it established a DIY Fund, which this year will provide a total of $250,000 for projects across the country similar to what Conaway and his collective are trying to create. Conaway and the Art Tribe are in the process now of making a video to explain the vision and hopefully obtain a grant, which would not only push the Art Tribe’s vision forward but also help get the building back into structural compliance.

Of course, as the cliché goes, Rome wasn’t built in a day, and neither will an immersive installation at The MAMMOTH, or elsewhere. But, the point of the Art Tribe is that you’ve got to start somewhere. In the meantime, the collective will focus on smaller projects to keep the plan moving forward.

The first, a work titled “Challenge for Civilized Society,” was part of the annual CONNECT at Bernheim Research Forest and Arboretum recently. It was an illuminated structure featuring line images of various animals — sort of a small-scale immersive art experience as a precursor to something bigger. Much bigger.

In addition, outdoor events will continue at The MAMMOTH, with the next being Oct. 19 – Punk in General Fest, a two-day live music festival with all the punk music you can handle, along with as much local fun and weirdness as the garden will hold. Expect everything from fire pits and corn hole to magic and sideshow acts.

And the Art Tribe figures to keep on growing, having started by word-of-mouth and now moving outward into the artist community. Conaway figures there could be as many as 100 artists who likely will embrace the vision for MAMMOTH and the immersive art experience he hopes to create.

“We’re waiting for the next project to come around and figure out what the next step is going to be,” he said. “There’s lot up in the air. We’re going to see where the pieces fall.”

Visit The MAMMOTH online at themammoth.org.