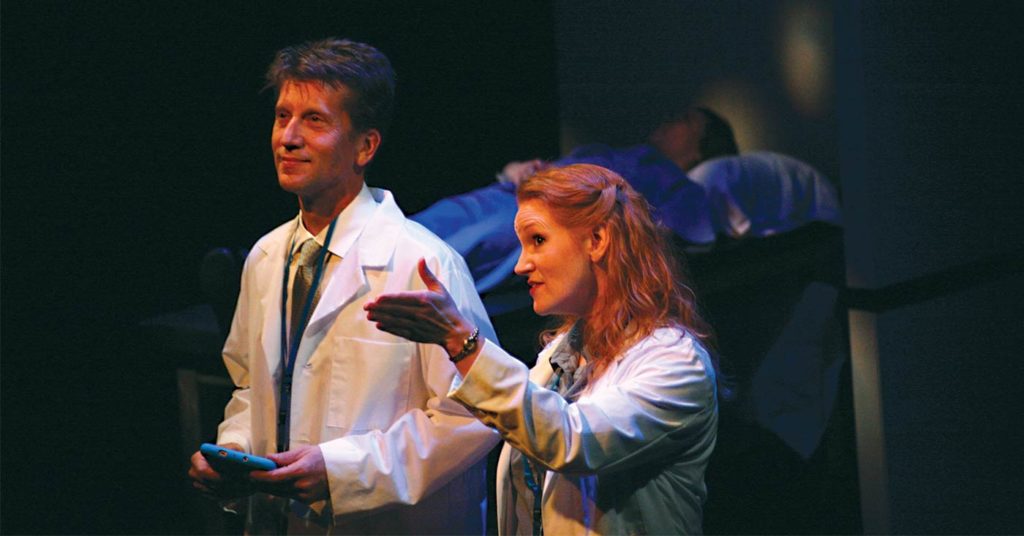 Scott Davis, Heather Green, and Trystan Bright-Hadley in ‘The Effect’ at The Liminal Playhouse.

On the surface, Lucy Prebble’s “The Effect” as performed by The Liminal Playhouse poses a question about the difference between love- and a drug-induced increase in dopamine. When two volunteers in a paid drug test start to develop feelings for each other, they’re tortured by the question of whether those feelings are “real,” and so are the doctors who supervise the test. But beneath that, there’s another issue, one that anyone who struggles with mental illness can understand: the terrifying inability to trust your own feelings.

At the beginning of the show, one of the test subjects, Connie (Megan Adair) is asked if she has depression. She quickly denies it, admitting that sometimes she “feels depressed” or “feels sad,” but she doesn’t have depression. And, while certainly there’s a difference, it’s also a conversation almost everyone with depression has had at some point. Maybe it’s not real. Maybe you’re just making a big deal out of nothing. Maybe everyone hates you. Maybe you’re just imagining it.

Later, the doctor supervising the test, Dr. Lorna James (Heather Green), attempts to talk herself out of a severe depressive episode, but instead circles around, unable to tell what’s true and what’s an effect of her disease. The truth of “The Effect” is it’s hard to tell what’s real and what’s not when dealing with a disease that is literally “all in your head.”

I start by talking about the way the show makes you think, because these are the kinds of plays that The Liminal Playhouse chooses: plays that broach complicated topics and ask uncomfortable questions, without really offering answers. Plays that will keep you up at night after you’ve seen them. But those questions wouldn’t have resonated so strongly without a solid cast and crew to deliver them.

The set of the play is perhaps the first star of the show, minimal but versatile. There are two hospital beds that hook through the use of magnets to the walls, and those walls turn and fold as needed. One fixed, white wall in the center serves as both a counter and a screen to display test data. Even the assistant stage manager (Grace Robinson) and stage assistant (Erin Jones) are dressed in medical scrubs, as they adjust the set between scenes, adding to the authenticity.

Trystan Bright-Hadley’s Tristan is charmingly easygoing and earnest, but Bright-Hadley comes through when that begins to disintegrate under the stress of the test. Adair’s Connie undergoes perhaps the biggest changes to her character but never manages to lose the audience. Perhaps the most interesting character is Lorna. She starts the play professional, but not distant. As the story unfolds, so does her character, revealing her history with Dr. Sealey (Scott Davis), personal feelings about love, the effectiveness of antidepressants and her own history of depression. Green has a way of playing her so that, even in her interactions with Sealey, her use of a clinical, analytical tone seems to be her way of taking control of a conversation. Her parallel to the patients with her own inability to trust her feelings is artfully handled.

Davis’ doctor seems sometimes despicable, and other times genuinely caring. It’s Dr. Sealey who delivers the line that might strike closest to the heart of the show, when explaining to Lorna how he loves her. Not romantically, and not like family, but “I’ve built a part of my brain around you, and it’s important to me.” Maybe it doesn’t matter, the audience may wonder, why people feel a certain way, whether it’s the result of chemicals or circumstance or something deeper. It matters that we feel it.

Eve Theatre Company’s “10 out of 12” is a play for lovers of theater onstage and behind the curtain. It’s something reminiscent of the mid-2000s TV show “Slings and Arrows” or the web series “Submissions Only,” but with an important distinction. Instead of focusing on the actors and directors, the real stars of “10 out of 12” are the tech team: stage managers, sound designers, lighting and all the things audiences often take for granted when they see the show.

“10 out of 12” is a theater term, meaning that during a 12-hour rehearsal, about 10 hours are spent working on technical issues. And while we do get delightful insights into the cast of the show — everyone from the young Eva (Gracie Taylor), earnest and flustered by turns as the long rehearsal draws on, to the theater veteran Paul (Phil Lynch), who seems to think the responsibility of bringing the show and his fellow cast members up to standard rests solely on him — their moments are frequently interrupted by changes in lighting, whims of the director (Hilary Brown) and discussions of what the resident techie (Scout Larken) is eating. As stage manager, Molly (Jessica Sharpenstein) has the role of keeping things on target, but during tech week anything that can go wrong will go wrong.

There are serious moments, but they’re weaved through Anne Washburn’s lifelike script and the guidance of Gilmer McCormick’s directing style in a way that makes the show never feels too heavy. Instead, audiences who have never been part of a theater company are introduced to the more ridiculous antics and requests. Washburn doesn’t spare playwrights either, with one character declaring, “I mean this with no malice whatsoever: I wish all playwrights would die immediately after writing the script.”

It’s not all tech week frustrations, however. The jokes and conversations between cast and crew, the humming and singing between scenes to calm each other’s nerves and nostalgic conversations about theater companies gone by and discussion of dreams to come all feel as real as the sillier antics.

In the final scene, the stressed cast stands around the stage and, as two of them begin to sing, the others join in until soon they’re all singing and dancing together, with the joy that comes from all coming together to make a good show. •