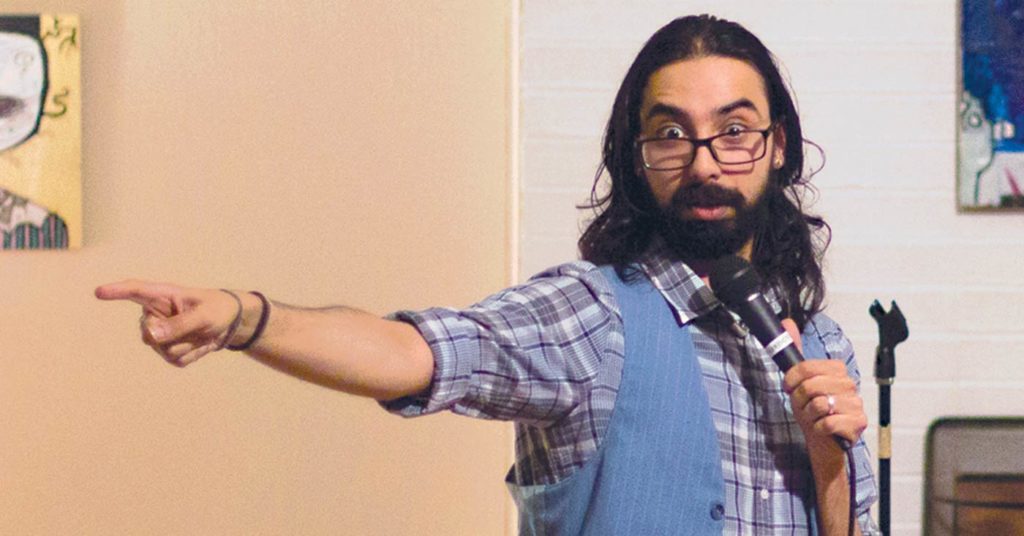 Comedian Krish Mohan’s motto is: “Let’s try some shit.” So, the native of India has been thinking about the current political state, such as how people need to be less scared of each other. “That seems simple, but it isn’t. That’s the stuff I’m delving into, which can be hard to make funny. It’s a challenge, but a good challenge,” he said. Mohan took time to chat about politics, his new wife, and trying some shit.

LEO: Do you have any fond memories of Louisville?
Krish Mohan: The first time I performed at Kaiju. It just kind of turned out that everyone from all of the other shows around town gravitated there that night. So, there were all these great comics from the scene who just showed up. Mandee McKelvey and Kent Carney were there. Dan Alten and Eric Sorgel popped in. It was like a weird family reunion. That happened the second time I was there, too — but that time we got a lot drunker. It was like 3:30 a.m. and I’m like, ‘The bartender needs to go home!’

Are you working on an album or anything on this tour?
Yeah, I plan on recording it in January. A lot of it is about the state of political divide we’re in today. And really, the idea of progress — are we as a country willing to do what it takes to achieve progress?

As a comic who is very politically astute, is it difficult to keep your material relevant when so much is constantly changing?
Sure. I’ve never been good at something happening on Monday, writing a joke and making it funny by Tuesday. I never have. Today, if I was trying to do that, I would lose my mind. So, I try to keep my material in a bigger scope. I don’t think either side of the aisle is handling this administration very well. We forget that the Klan and white supremacists existed before Trump — they’re just louder now. To me, it’s not enough to silence that kind of ideology again — we need to purge it. When you’re trying to change an ideology, you have to play the long game, not the short game. Ultimately, all of the fighting is the short game. We need people to be less scared of each other and hate each other less. That seems simple, but it isn’t. That’s the stuff I’m delving into, which can be hard to make funny. It’s a challenge, but a good challenge.

This has been a violent week here in Louisville and in Pittsburgh, and mail bombings. How do we make this stop?
Yeah. Especially with what happened in Louisville and Pittsburgh, people are going to make it about guns. This isn’t really about the guns. It’s trying to figure out what motivates someone to kill another human being. That’s what we need to get to the core of. And not just that they’re racist or anti-Semitic, but what was the cause? Usually, it’s fear. Scared they’re going to get left behind, or they won’t be heard anymore.

You recently got married. Has your wife had an effect on your comedy or your approach to comedy?
Oh, sure. A lot of it is that we have differing opinions on a lot of things. We challenge each other. And in talking to her, I get a different perspective in ways that I never would have seen them. Sometimes that’s the missing piece of the puzzle that really allows me to formulate a thought, finish a joke or whatever. Also, as a comedian, it’s great to be able to write from many different perspectives.

You all still have to have those dumb, relationship fights, as well.
Sure, those come up from time to time. The goal is that hopefully, those occur less and less often. I mean, I’m a comic on the road, and she’s a musician who might be on the road or off recording an album. We may only get to see each other two days in a given week. We don’t want to spend those two days mad at each other. Don’t get me wrong — we have absolutely done that, and it really sucks.

When they write the Krish Mohan biography, what will it be titled?
I think it would be ‘Let’s Try Some Shit.’ That’s my usual motto. If it’s something we haven’t tried, and we keep resisting it, why not? Let’s try some shit. If it works, great. If it doesn’t, then we learned some things.