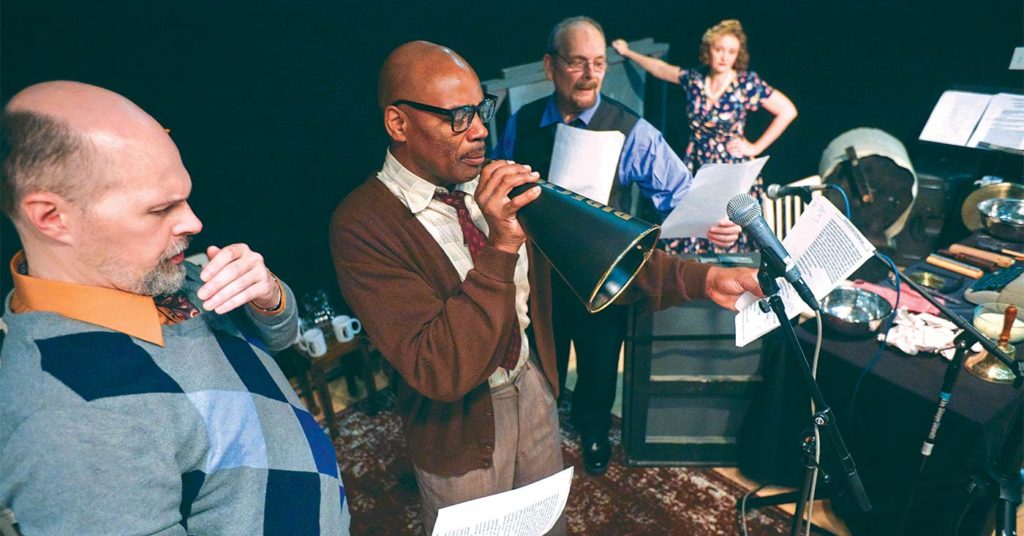 Gregory Maupin, Dathan Hooper, Jon Huffman and Laura Ellis in ‘The War of the Worlds.’ | Photo by Bill Brymer

On Halloween 80 years ago, one small radio program spurred a massive uproar. Despite four announcements from the Mercury Theatre on the Air that the reports of an alien invasion were part of a fictionalized radio adaptation of H.G. Wells’ “War of the Worlds,” listeners all over the country fled their homes and called the police and newspapers with concerns ranging from aliens to German invaders. The radio play went down in infamy for being “too realistic” and terrifying. Now, Kentucky Shakespeare, appearing in Louisville Public Media’s Performance studio, is bringing back the “The War of the Worlds” radio play as a new Halloween tradition in Louisville.

It says something about the authenticity of the show that upon leaving, my plus-one asked, “Did it feel like something went wrong?” It did feel as though something had gone wrong… because something did go wrong 80 years ago. See, this radio play isn’t so much an adaptation of the H.G. Wells novel as a recreation of the 1938 Orson Welles’ production. There are levels of meta to this. The actors aren’t playing characters from “War of the Worlds,” but rather playing the actors who are playing various characters from “War of the Worlds.”

The unease begins when, halfway through, a radio producer (played by stage manager Racheal Luther), walked over to the window and held up a sign that said, “People think it’s real.” The announcer (Abigail Bailey Maupin) and Orson Welles (Gregory Maupin) wordlessly confer and decide to continue with the show, reminding the audience again that the show is all fictional. As they continue, telegrams flood in from concerned listeners, and occasionally the announcer hands them to members of the cast to read. Gayle King’s piano accompaniment seeks to quell the panic (and sometimes serves for ironic distraction from the chaos of the news bulletins within the story of “War of the Worlds”), but the cast pushes through to the end of the show, where Welles reminds everyone that it was all in good fun, and after all, “it’s Halloween.” It was this element, knowing about the hysteria building outside, that added the spooky factor to the show more than stories of any aliens.

The performance is done in an actual radio studio within Louisville Public Media, which adds to the authenticity. This isn’t new to Kentucky Shakespeare’s Halloween productions. When performing the rather bloody “Titus Andronicus,” it was always performed in an empty warehouse that added to the sinister grit of the show. In this case, because the show relies more upon sound than visuals, it can be difficult for the audience to know what to do with their eyes. For me, the most visually interesting element was the foley art performed by Laura Ellis. She squeezed wet pasta in her hands to create the sound of saliva dripping from the mouth of the aliens, pressed a pair of loafers on a tray full of paper shreds to create the sound of walking through leaves, and delivered lively kicks to a large metal sheet to represent the sound of gunfire. Ellis, credited as the sound designer, also joined King in the musical accompaniment as a singer and accordion player at points. The two put on a musical pre-show full of thematic 1930s music that just might have been Kentucky Shakespeare’s best pre-show to date.

The actors — particularly Maupin, Jon Huffman and Dathan Hooper — had plenty of layers for each of their portrayals. Not only do they each have multiple roles within the story, but they were also playing the radio actors fully unprepared for the public reaction to their program (whereas I suspect the Kentucky Shakespeare Company, led in this case by Director Amy Attaway, was a little more prepared). Maupin had the perfect, smooth, radio storyteller voice for the role of Orson Welles’ narrator, as well as the descent from composure to panic in the character of Carl Phillips. Hooper’s roles ranged from a militia leader to a panicked, unhinged “stranger” in the wake of the alien takeover. Meanwhile, Huffman played no-nonsense Professor Pierson, more-or-less the protagonist of the story who keeps the record of life after the alien invasion, but fills in for various ensemble roles.

Props should be given, too, to Bailey Maupin’s performance, both verbal and nonverbal. As the announcer in the context of the story, her job is to keep her cool while relaying news bulletins of alien invasions and the death of colleagues. Often, she relays these stories and then turns things over to a soothing musical conference in a jarring change of tone. As the announcer of the tempestuous Mercury Theatre radio program, she’s one of the first to see the warning that people think it’s real, and she can be seen shaking her head and waving it off, relaying to the rest of the cast without words that the show must go on. She’s the one to show Welles some of the more concerning telegrams, and to kindly remind the audience — once again — that it’s only fictional.

But it certainly sounds real enough.