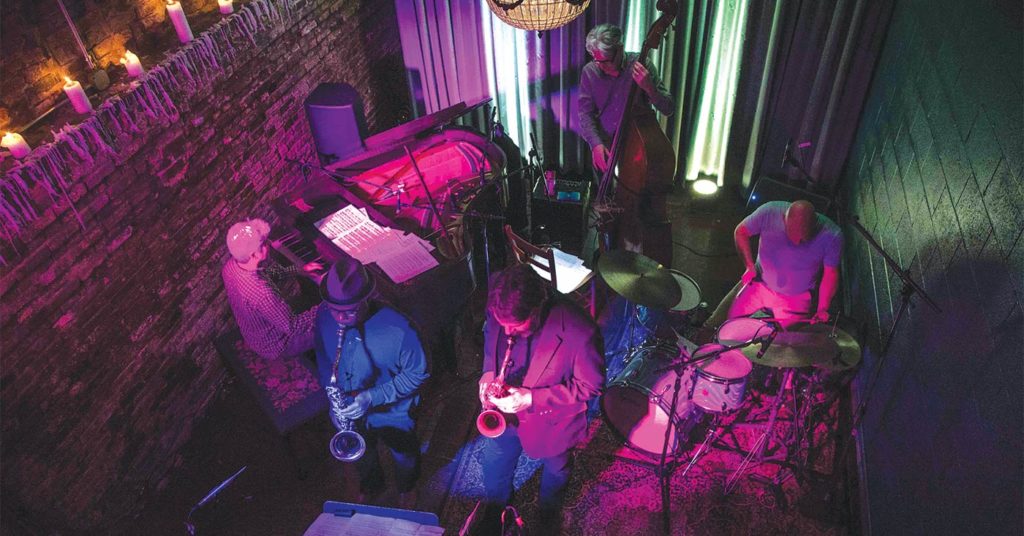 “These different incarnations of whatever I can think of is really pulling people together that I can learn from,” Duncan said. “Most of the time, if you’re just doing your own thing and maybe not taking some chances on making things, it’s harder to bring people together. Everybody that’s on the album will be [at the show], except it’s gonna be a lot crazier because it’s gonna be live, and we don’t give a fuck. It’s gonna be fun, you know how it goes.”

The quintet wrapped up its Dream session in one day at Downtown Recording studios. Duncan said their enduring chemistry as a group gave it a natural feel, since he has played with each of them in some capacity for a number of years, adding, “Everyone in the group goes towards risk in terms of their music, and in terms of their lives. And I think a lot of that comes into the music, and it creates a more interesting conversation.”

The supergroup cliché is usually portrayed by aging rock stars who escape to some backwoods cabin studio for two weeks and make an album. The resulting record is usually over-hyped and decent at best, but its impact is short-lived. This doesn’t quite apply in jazz. It’s Alright to Dream was a synchronized effort, with each unit bringing their own colors into the mix. Sounding like a musical homage, the record includes odes to Kentucky, Muhammad Ali, dreamers, Thomas Nast, Eva Hesse and Isodora Duncan. One of the songs, “Oomamaboomba Bolevard,” is a tune inspired by the works of minimalist artist Eva Hesse — “there’s a certain darkness in her work, but also freedom,” said Duncan, relating to the song. “It’s a little bit dirty, and funky. I liked the way she experiments and work with lines. And I think that’s where some of the improvisation went and communication on this recording.”

“I write songs or compositions usually with a story behind them — it’s just a like a poem,” he continued. “It’s just been something I’ve been thinking about and I write a melody. Sometimes writing songs or writing compositions is a way to look back and reflect. And you get older, so you reflect differently at different times and I’ve found that really rewarding.”

If you’ve ever gone out to live jazz in Louisville and have ever seen Duncan play a solo for the first time, you don’t forget it. He’s a prolific performer with credits in a myriad of projects, starting with his first large ensemble Liberation Prophecy. Recently, he arranged some of Will Oldham’s music, culminating in a performance together at Odeon late last month. Plus, he still plays regularly at Nachbar Wednesdays, where you can enjoy some of his rawest displays. Duncan strives for others to challenge and push his playing further, which he values greatly in the current quintet and his previous music endeavors.

“I would have not done [It’s Alright to Dream] if these musicians couldn’t have gotten together,” he told LEO. “This was a great group — everybody is very special and I love what they do on this album.”