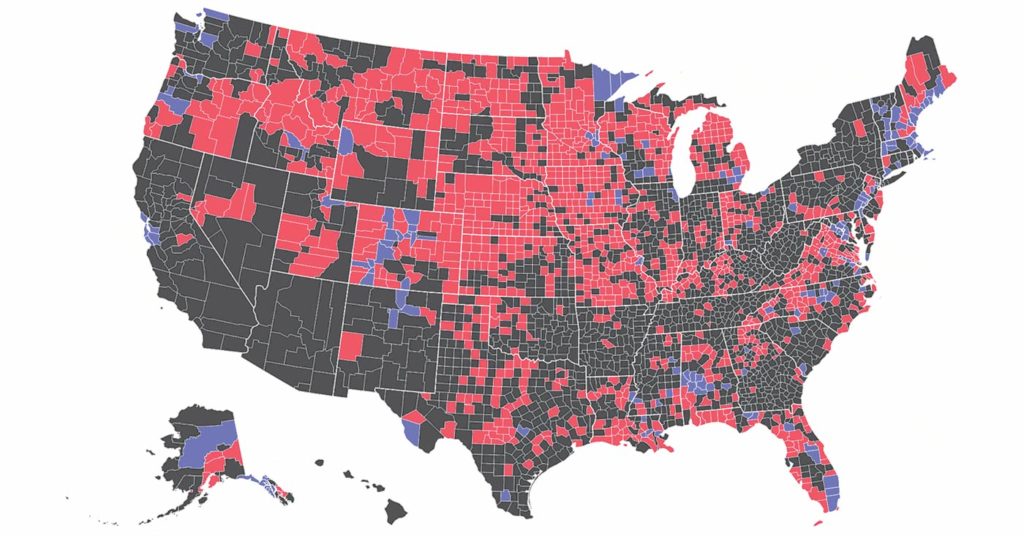 Did you vote in the 2016 general election? No? Hated Hillary Clinton as much as Donald Trump? Would have voted if Bernie was on the ballot?

How’s that working for you now?

Philip Kearney, an amateur cartographer from Austin, Texas, wondered what would have happened if all of the people who were eligible to vote had done so. He created a map of the United States that shows non-votes: People who are eligible to register and vote, but did not do so. Those nonvoters, by proxy, elected the candidate we will call Nobody. Each county on the maps of the nation and Kentucky show the winning candidate: Trump, Clinton or Nobody.

He calls his map the “United States of Apathy.”

What he concluded is that by counting the votes of voters and non-votes of all eligible voters, Trump got 21 electoral votes, Clinton got 72… and Nobody won overwhelmingly, with 445 electoral votes.

Although Jefferson County’s voter turnout was 60 percent, Kearney explained that the maps do not show simple voter turnout, but rather lost voting potential. “The way you vote for Nobody is to stay home. So, for Jefferson County, you have 557,485 eligible voters (U.S. citizens age 18-plus, whether registered to vote or not), according to the U.S. Census. Of those, 190,824 voted for Clinton, 143,758 voted for Trump, and 18,196 voted for other candidates. The total number of votes is 352,778.  Now, if you subtract the total number of votes from the number of eligible voters, you get 204,707 voters that stayed home. In this map, these 204,707 voted for ‘Nobody.’ Because Nobody got more votes than the next highest candidate, Clinton with 190,824, ‘Nobody wins.’”

Regarding the Kentucky map, Kearney said that the gray counties are the ones where the end result could have been different with increased voter turnout. “In the Kentucky map, the red counties on this map are ones where Clinton had basically no chance. But in many of the gray counties, nearly all of which went for Trump, Clinton could have conceivably won if she’d taken a significant number of the ‘Nobody’ voters. On the flip side of the coin, Trump could have easily won ‘blue’ Jefferson and Lexington-Fayette counties if he’d brought out a chunk of the nonvoters.”