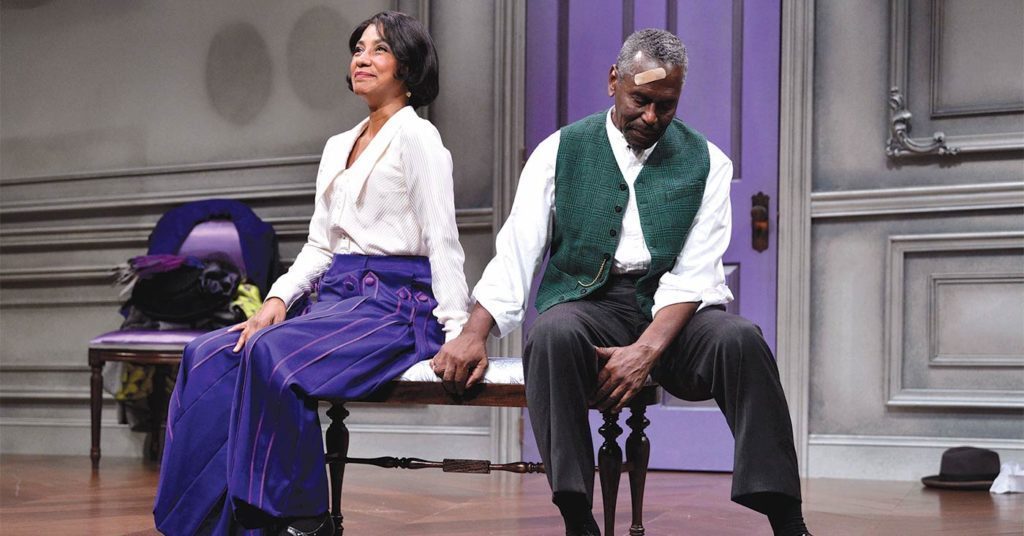 The Nora of Henrik Ibsen’s 1879 play “A Doll’s House” is among the most startling characters in all of Western literature. She is an adroit, undercover strategist who plays a long game to protect her husband and family until she can no longer bear the cost of trading her own humanity for what she sees as a sham existence. So she commits what still seems a shockingly transgressive act: On Christmas Eve, she slams the door on her husband, her children and her entire life.

Lucas Hnath’s 2017 play, “A Doll’s House, Part 2,” which opened last week in an Actors Theatre of Louisville production directed by Pirrone Yousefzadeh, is set 15 years after those events, and it opens with Nora knocking on the door of her old home.

Hnath, like Ibsen, is a playwright who revels in the theater of ideas. His outstanding plays “Death Tax” and “The Christians,” both of which premiered at the Humana Festival, are cases in point. But in Ibsen’s play, it’s the story that reveals the ideas, whereas in Hnath’s play it seems — at least at first — that ideas must reveal the story.

The opening scene is an encounter between Nora (Zuleyma Guevara) and Anne Marie (Socorro Santiago), the nanny who cared for both Nora and Nora’s children. It’s a testy scene — and one that bears a heavy narrative weight.

First, Hnath has to ensure that audiences unfamiliar with Ibsen’s play will know the backstory.

Second, Hnath has to convey the enormous, immediate impact Ibsen’s Nora had on Western culture. That second element is important because Hnath’s Nora has become the teller of her own tales. Under a pseudonym, she’s published a series of popular novels that advance a radical call for the emancipation and equality of women and for the abolition of marriage. And those ideas apparently call for speechifying — fascinating speechifying, but speechifying nonetheless.

Happily, once the monologues give way to dialogues, the pace accelerates, the conflicts take dramatic shape and the play takes flight as Nora confronts Torvald (Kim Sullivan) and Emmy (Nikhaar Kishnani), the husband and daughter she abandoned.

Nora has come as a supplicant. Her novels have aroused hostile reactions from powerful men, and one of them has the power to destroy her reputation and her life, unless she can persuade Torvald to grant her a divorce — a divorce she does not have the legal authority to execute on her own.

Whether you know Ibsen’s play or not, the obvious question posed by the play might be, “How has Nora changed during the elapsed time?” And she certainly has changed — in ways that may infuriate or delight you, but will certainly give you food for thought.

But it seems to me that Hnath is exploring a more far-reaching question: How has Nora changed the world? The answers are fascinating and vigorous. Santiago’s Anne Marie eventually lifts her voice — and a finger — to deliver a fiery, obscene response to Nora’s condescending exhortations. Kishnani plays Emmy with a bright, doll-like innocence that disguises a woman even more sly and cunning than her mother. And as the only man in the play, Sullivan plays Torvald with a deep conviction and emotional power.

This may, or may not, be a play that you will like. But in the intimate Victor Jory Theatre, where Reid Thompson’s set seems haunted by the past and Valerie Therese Bart’s costumes are perfectly attuned to the characters, it would be fascinating to see this and the Ibsen play on a single bill. But until that happens, this is an engrossing piece of theater. Go with good company, and you will have plenty to discuss afterwards. •

‘A Jewish Joke’
At one point in “A Jewish Joke — A Drama About Comedy,” Bernie Lutz — the sole character in this play by Phil Johnson and Marni Freedman — argues that American humor is rooted in Jewish humor. That may, or may not, be objectively provable, but in the mid-20th century, there certainly were plenty of Jewish writers and comics working in American media.

This production is produced by Bunbury Theatre Company in cooperation with the authors and directed by David Y. Chack. It’s also the most recent production under the auspices of the Bunbury-ShPIel Performing Identity Theatre Project, which has undertaken a multi-year project to produce plays that explore Jewish and other identities.

Lutz is a screenwriter and jokester who is on the cusp of greatness. He works for MGM and has projects going with the likes of Danny Kaye and the Marx Brothers. On his desk he keeps a stack of 3-by-5 index cards, filled with jokes borrowed from great comics of the time. Also on his phone is the lifeline of his business, a phone that rings constantly.

On this day, those rings quickly start bringing good news. Lutz himself is profoundly apolitical, but this is the McCarthy era, and a new publication has hit the streets: Red Channels: The Report of Communist Influence in Radio and Television. Published by the right-wing magazine Counterattack in 1950, Red Channels identified 151 media persons as being involved in Communist-related activities, effectively landing all of them instantly on the blacklist.

Lutz is not on the list. But his writing partner is. At first, Lutz thinks there’s been an error, but grim tidings keep pouring. Lutz starts down a frantic path of telephonic wheeling and dealing — even as he tells the audience stories and jokes about his wife, his past, his partner and his values — values that will be tested as the day goes by.

In this production (which is slated for an Off-Broadway run later this season), Lutz is played by co-author Johnson, who originated the role. He turns in a captivating performance that brings all the wit and energy of a mid-century madcap comedy to bear on a dreadful moment in U.S. history. Johnson plays Lutz with shambling, unkempt charisma and wit that sets up a powerful, emotionally-charged ending (costumes and props by Hannah Greene). •