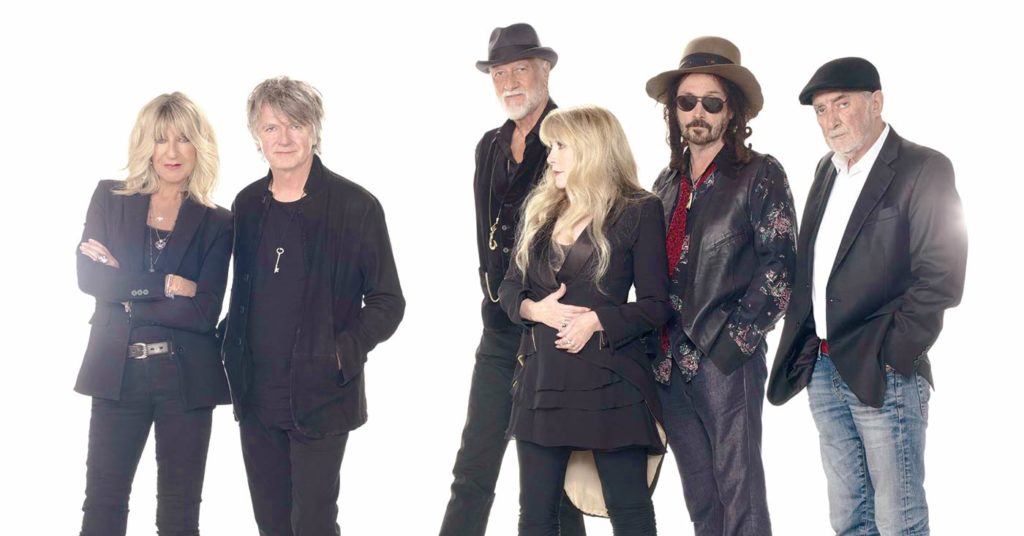 Going to see a blockbuster band that hasn’t had a hit in a few decades on an arena tour is a tricky thing. Every time it happens, we all have our own personal algorithm for it. It’s something like: your disposable income combined with personal nostalgia combined with a how-well-can-they-still-perform sort of thing. And, while I’m not sure how the first two work for you on any given concert, Fleetwood Mac still passes that last criteria. When the legendary band, which has now been around in one capacity or another for half a century, swung into the KFC Yum Center Wednesday night, they definitely ran through the hits with intensity, but they also paid tribute to their bluesy beginning, proving that their new lineup can deliver both. Staples Mick Fleetwood, Stevie Nicks and Christine and John McVie, were joined by newcomers Neil Finn (Split Enz, Crowded House) and Mike Campbell (Tom Petty & The Heartbreakers), with the notable absence being Lindsey Buckingham, who recently claimed that Nicks gave the band a him-or-me ultimatum, adding to the massive amount of drama scattered through their history.

After opening with the group vocals of “The Chain,” Christine McVie sang “Little Lies,” followed by Stevie Nicks taking over for “Dreams,” and then Neil Finn led on “Second Hand News,” a song Buckingham wrote about the aftermath of his romantic relationship with Nicks that first appeared on the 1977 album Rumours, which sold more than 40 million copies. Finn singing the golden-hooked, venom-spitting pop gem with masterful drumming by Mick Fleetwood, turned out well. It obviously lacked the tension present when Nicks, who harmonizes on the song, and Buckingham sing it together, but Finn’s voice is a perfect fill in. A curveball didn’t come until song No. 6, when Nicks sang “Black Magic Woman,” a track that an original guitarist of Fleetwood Mac, Peter Green, wrote in 1968, and that was later popularized by Santana. Nicks said they’ve never done it before in that capacity, but her haunted vocals and Campbell’s blues chops, paired with the song’s original rhythm section, made for a unique concert moment that transcended a band just showing up and playing the hits. It was also one of the many times throughout the night that served as a reminder that Fleetwood Mac made the correct choice. No one, other than the members of the band, is really sure what went down this time in terms of their infighting, but if there’s a choice between Nicks and Buckingham, that choice is obvious. Even though it essentially took two people to replace Buckingham; Nicks, with her idiosyncratic vocal style and charisma, is basically irreplaceable.

On Wednesday night, the two newcomers, Campbell and Finn, were given their own moments to shine. Campbell, mostly on blues breakdown and solos, while Finn performed some of his old music, including a Split Enz song, “I Got You,” as well as a Crowed House cover, “Don’t Dream It’s Over,” the latter of which Mick Fleetwood introduced as a song that was important to him during a difficult part of his life. Even together, it was hard for them to replace Buckingham’s clever guitar work and rangy vocals, but they also didn’t leave much to be complained about. It even led to a cover of Tom Petty’s “Free Fallin’” (sung by Nicks), to commemorate the songwriting giant who died last year.

So, getting back to the whole “should I go see a band past their prime” conversation. Tickets aren’t cheap, but if you have some money to throw around, and you’re into Fleetwood Mac, you won’t be disappointed. Things are a bit different now. And they’re not perfect, but this is possibly the most resilient band ever to exist. Once again, they shifted and evolved and made the best out of another situation that would have crushed a lot of bands. And they are doing it with a lot of platinum-achieving old ideas, and a few interesting new tricks.