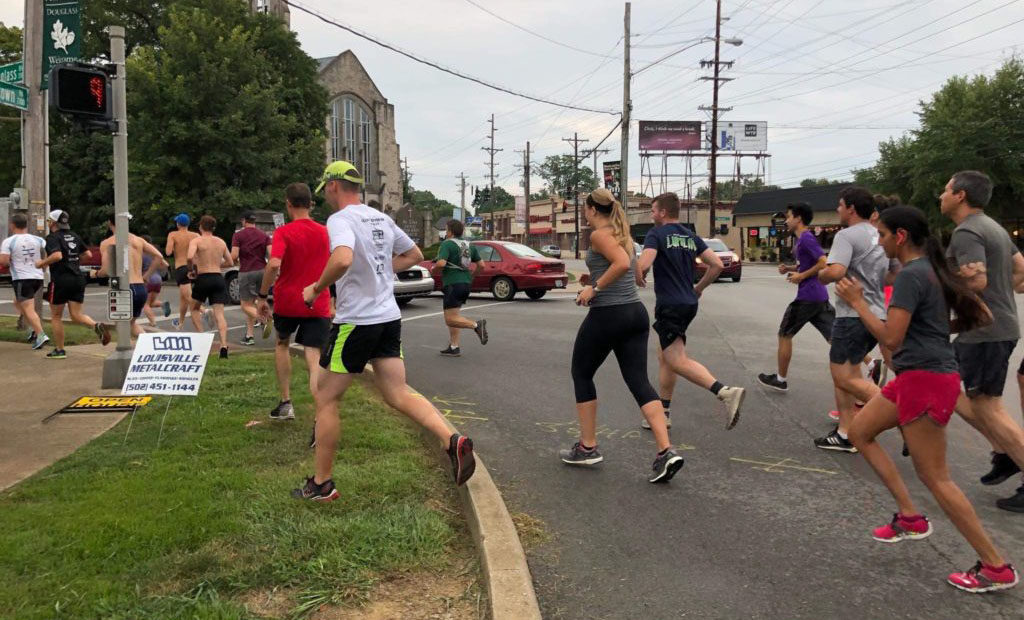 It’s 9 p.m. on a Monday, and the back patio of Great Flood Brewing Co. is slammed. It’s not typically a busy time for a bar, but this isn’t your typical crowd. No, these folks are runners, members of the Derby City Run Club, to be specific, recently returned from a two-and-a-half-hour jaunt around town. If you’re anything like me, then you might wonder why anyone would voluntarily run for two and a half hours, but here they are: a congregation of runners talking, laughing, drinking. Here and there shirts are missing. There’s sweating. Like, a lot. And, while there’s nothing exclusive about either the DCRC or its members, the sense of community here is knife-cuttingly palpable; the camaraderie is thick enough to make one take up running if only to find such an instant supply of pals.

Certainly, the DCRC has come a long way since its inception. Founded by Jason Kelly in the summer of 2013, the club has grown substantially over the past several years. “When we first started in 2013 we were seeing five, maybe 10 people at the most,” Kelly said, “but now at any given run we’ll see 50, 60 people.” With three runs a week, that comes out to well over a 150 participants (though some are obviously repeats).

Kelly moved to Louisville five years ago simply because he was “looking for a change of scenery.” He’d always been involved with fitness at some level, owning an events company in Tampa, Florida, that hosted bike races and adventure runs, before transitioning to a full-time fitness trainer a few years ago. “This is the seventh state I lived in,” Kelly said. “My parents live nearby so that helps out. And as much as everyone loves and talks about Florida, it’s really hot all the time. So I was looking for that nice change with all the seasons. And I love the cold. I’m one of those weirdos that hopes it snows 1,000 inches every time. I honestly didn’t think I was going to live here for more than two years or so, you know. Being young, it’s easy to pack up and go, but this area has been by far my favorite area I’ve ever lived in. I plan on staying here for quite awhile.”

Of course, being the new kid in tough in town can be a bit lonely, so, after Kelly got into town he  “threw up a quick Facebook page and website” to gauge Louisville’s interest in a run club. “I started it because I didn’t really know anybody here. There were run clubs here, but none that wanted to hang out afterwards or wanted to do stuff. Everyone just wanted to get their runs in and just peace out. So I looked for a group that wanted to hang out, have a beer, you know, do more than just run. The run is just an excuse to get people together and get them active.”

For most of us, running is generally considered a solitary endeavor. But, as Kelly inferred, this can sometimes lead to burnout and eventual discontinuation for some individuals, which, in turn, can result in a loss of myriad health benefits. As such, he believes the most important feature is this “community aspect” that run clubs such as the DCRC provide. They’re able to motivate individuals to “get and stay outside and stay healthy” through its built-in social network. “You can share how your week is going or what’s going on your life with people,” Kelly said. “And, yeah, it’s also an excuse to go drink that beer and not feel guilty about it and laugh and have a good time.” Kelly is proud of this, of what he’s been able to accomplish in such a short time. In kind, he’s seen how that same feeling has flourished through his ranks of fellow runners. “I feel like I’ve almost become kind of an ambassador to the area, and I feel like that [about] a lot of the people in the groups, too — I see how they’ve become ambassadors of Louisville too — how they’ve helped grow either the run scene, or they’re doing something big to help the area out. That’s the biggest thing, the idea of helping make the city and the community, and not just the running community, the whole city, a little bit of a better place.”

I wanted to know what the runners got out of all this, if being part of a group like the DCRC truly affected the relationship with their hobby in any significant way. In the crowd, I found the uber-affable Tami Mazzoccoli. Mazzoccoli, who’s been a runner since 2012 and a DCRC member since 2014, is more than happy to gush about the club. “We’re a family here, really,” she said. “We run together. We hang out together. We have fun together.” Mazzoccoli concurred with Kelly that the social element of these outings is the most attractive and important feature: “It encourages us to do things we might not otherwise do.” For Mazzoccoli, that meant gaining the wherewithal to run her first marathon, something she had never seriously considered before. “Everyone is always pushing others to the next place,” she told me, flourishing her hand across the gathered crowd of runners that have her back.

Off to another side, I spoke with Simon Corcoran, a man so devoted to running that he actually runs to the run. Corcoran is 54 and former competition runner in the ‘90s before a compression fracture in his back slowed him five years ago. Over time, he regained his strength and began running again, but it was the DCRC, which he joined three years ago at the behest of some friends, that keeps him motivated and working hard to maintain his fitness. “Running with these people makes me go harder,” Corcoran said. “It’s a support group really. We’ve got people running six-minute miles and people running much longer ones, but we’re all friends here. Everyone is at their own pace. No one is looked down upon and everyone is encouraged.”

Like myself, some of us will never feel the urge to run outside of a scenario where we’re being chased by a an angry bear. But I can see the attraction to joining the DCRC, if I did. Everyone I talked to, including Kelly, encourage new runners to come out and give it a try at any of their three weekly runs. They love to see first timers, no matter your level of fitness. The good news is that even if you have a hard time getting behind the running part perhaps, you can more easily get behind the drinking beer part.