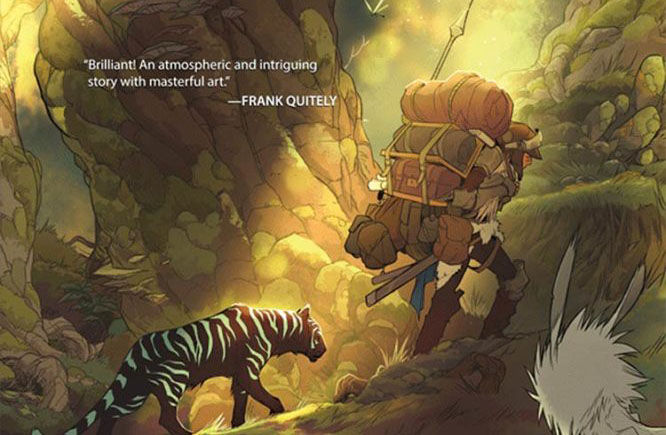 “Isola” sees Brenden Fletcher and Karl Kerschl come together to bring a childhood idea to fruition. Fletcher, author of “Batgirl of Burnside,” and Kerschl, artist of “Gotham Academy,” have been conceptualizing their story since elementary school. Colorist Michele Assarasakorn mapped out the colors beforehand, creating a cohesive palette that corresponds with the nonlinear storytelling. For instance, the colors respond to the location or the emotions involved in certain actions. The result is beautiful and engaging.

The story follows the Queen Olwyn and her Captain of the Guard, Rook, in the search of the island of Isola. The land they travel through is filled with various dangers, to the queen and the kingdom itself. It is up to Rook to protect her queen, who has been cursed to travel in the form of a tiger and is being hunted down by her enemies.

If you enjoy the world building and visual style of Saga and Miyazaki films, Isola is right up your alley. For a sample of what to expect, they have made the prologue, published inside “Motor Crush” Nos. 1-5, available for free on Isola.ca. Isola is available now for $9.99. 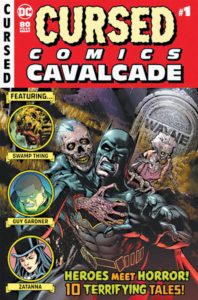 The holiday anthology is not a new genre of superhero comic, but it is experiencing something of a resurgence. “Cursed Comics Cavalcade” from DC Comics is an above-average example. The 80-page collection features Halloween-themed stories from a variety of writers and artists tackling every end of the spooky gamut. For example, this collection includes, among others: an emotional, heartwarming take on Solomon Grundy; a classic, rainy Batman detective tale; and a gruesome Swamp Thing story.

Basically, there’s something for everyone here, which is really the appeal of these massive anthologies. The writer and artist change every story, which in this collection equates to every five or so pages. Such a variety of creators means that the book is constantly changing and offering up new things. It’s a restless, energetic book that gives readers pretty much everything they could want from Halloween stories: ghosts, zombies, slashers, and uh, Batman.

Which brings me to the best part of this book; it requires practically no knowledge of DC history to enjoy. Sure, there are references and callbacks, but, for the most part, the stories provide more than enough context to enjoy them hassle-free. Nothing here will send a reader to Wikipedia because they missed a storyline from 2009. Even better, the stories are written to appeal to a broad audience, even those who may not usually pick up a superhero comic. In the end, what you have with “Cursed Comics Cavalcade #1” is a sampler plate of both superhero action and Halloween atmosphere.

“Cursed Comics Cavalcade #1” is available as a single issue for $9.99.