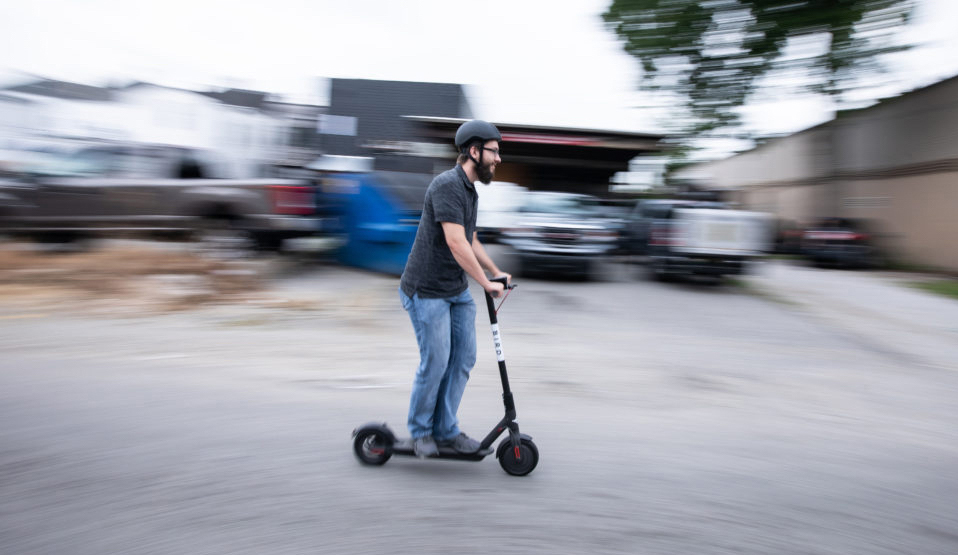 A user riding a Bird Scooter. | photo by Kathryn Harrington

In a clear effort to regulate Bird scooters, the rentable, electric devices that appeared in Louisville in July, the city has announced a policy for “dockless vehicles,” including limits on how many companies are allowed to operate in the city and where.

Louisville’s city government originally banished the scooters when they first came on the scene, only to enter into a temporary contract with Bird that allowed the California company to participate in a pilot program. Many of the new rules for dockless vehicles mirror the restrictions that the city imposed upon Bird during their trial period, including where they’re allowed to operate.

The new rules limit to four the number of dockless vehicle operating companies in Louisville, according to a news release. Those companies must undergo a six-month probationary period before they can obtain a full operating permit, which can be renewed annually.

The vehicles also are restricted to operating within the Watterson Exressway, with some extensions of the zone in the south to Palatka Road, including Iroquois Park, and west to Shawnee Park. Within the operational zone, there are nine more distribution zones  to “ensure an equitable distribution of the service.”

Waterfront Park is not within the operating zone because it already has its own bike rental service, the city said.

Some aspects of the policy appear to address a concern reported by LEO that Louisville Metro District 4 Councilwoman Barbara Sexton Smith had that scooter riders weren’t obeying the rules of the road.

Dockless vehicles are now required to operate on streets and, where available, in bike lanes and bike paths. They’re not allowed on sidewalks the majority of the time, only when leaving or accessing a parking location.

When an operator is on their probationary period, they’re limited to 150 vehicles at first. Only if their ridership exceeds four riders per vehicle per day will the operator be allowed to increase their fleet by 100 vehicles per month, and only up to 650.

Ultimately, operators will be permitted 1,050 vehicles if they complete the probationary period and meet the city’s performance standards, including responsiveness to complaints and ridership.

Operators are required to pay $1 a day per vehicle, in addition to a license application fee, annual feed, bond and fee for a designation group parking area.

The new policy does not mention Bird scooters by name.

To view the entire Public Works policy and a map of the operational zone, visit https://louisvilleky.gov/news/city-announces-policy-dockless-vehicle-transportation.