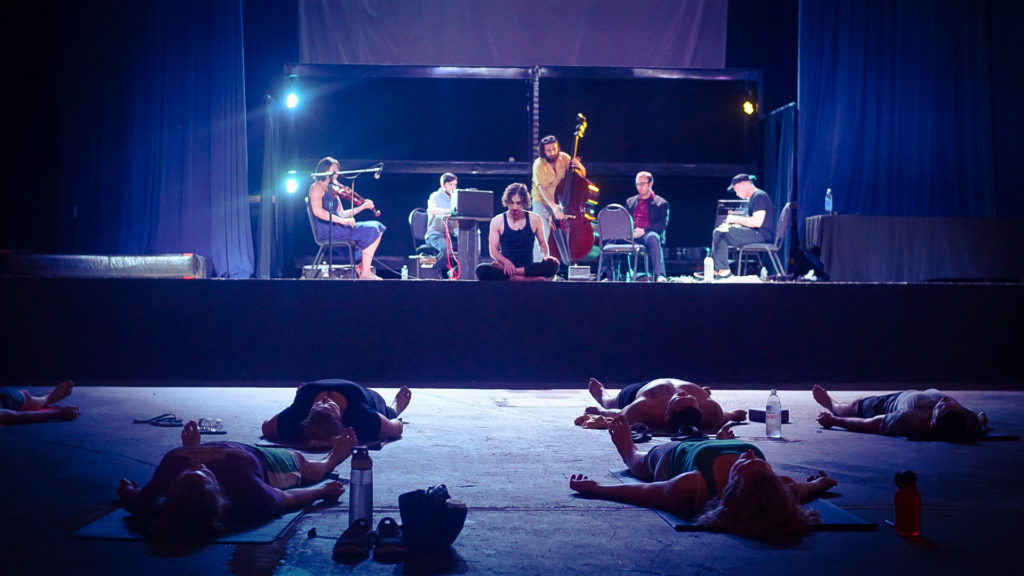 Yoga Enigmatic is a new project by the local music collective, Orchestra Enigmatic, that matches an improvised orchestral performance with yoga. It’s free, with a suggested donation and open to a range of skill levels, and it usually falls on the last Saturday of each month at the Art Sanctuary.

“Yoga Enigmatic gives the listener a chance to move about the space — and yoga isn’t required,” said Royce, who is also on the Orchestra Enigmatic board of directors. “You can have a drink at the bar at Art Sanctuary, walk around and see some of the art that’s up. Or, if you’re into the yoga, you can do the yoga. It kind of creates that other avenue for people to be up and about, stretching or moving to the music instead of just sitting down in a chair.”

“We build a chemistry together, where the energy of the yoga flow is accompanied by the energy of the music, crescendoing when we’re being challenged, and calming when we become more restful,” Short added. “It can lead to some really powerful moments.”

Enigmatic means “mysterious” and “difficult to interpret or understand.” Orchestra Enigmatic, a nonprofit organization that calls itself a “21st-century chamber group,” likes to play on that scale with its experimental programming, but it’s not difficult to understand why they’re portrayed as a mysterious musical entity. Comprised of over 30 members who rotate roles within various chamber group settings, Orchestra Enigmatic is adaptable and always different.

“It’s definitely a collaborative effort,” Royce said, reflecting on her last Yoga Enigmatic performance. “One of the things that we’re trying to accomplish is having the improvising musicians follow the movements of the yoga instructor. For example, when the yoga instructor is having the class to stretch their arms upward, we have these ascending melodies, or conversely, in savasana, at the end of the class where everyone is laying flat on the ground, we try to create this very deep sounding wall of a drone, something just very peaceful for the class to kind of take them away in their minds. It’s still a work in progress, but, so far, it’s been interesting to see just what comes about.”

Orchestra Enigmatic’s performances showcase the original work of local composers, in addition to occasional tribute sets, where members create new arrangements from the music of more mainstream artists — last year, the group took on Radiohead’s In Rainbows and, coming later this year, they do a heady challenge with Bjork. And they’re always looking for new ways to engage their audience. And Short sees Yoga Enigmatic as mutually beneficial for both live music and practicing yoga.

“I love when I get opportunities to combine my two worlds,” said Short. “I’m also a big fan of a yoga session where the music is new to you. For anyone that practices regularly, it can potentially throw your focus off if a song comes on that you’re familiar with. You’re likely to start thinking about whatever you associate with the song. With what we’re doing, this music will more likely enhance your focus, as it creates this entrancing and meditative ambiance as a backdrop to your flow.”

Supporting the Yoga Enigmatic series helps keep the musical visions of Orchestra Enigmatic accessible with a continued trend of hosting thoughtful, and free, experiences for the public. These sessions take place at Art Sanctuary through the end of the year: Oct. 20, Nov. 24 and Dec. 29; learn more about the Orchestra Enigmatic’s mission to unite likeminded expressionists at orchestraenigmatic.com.