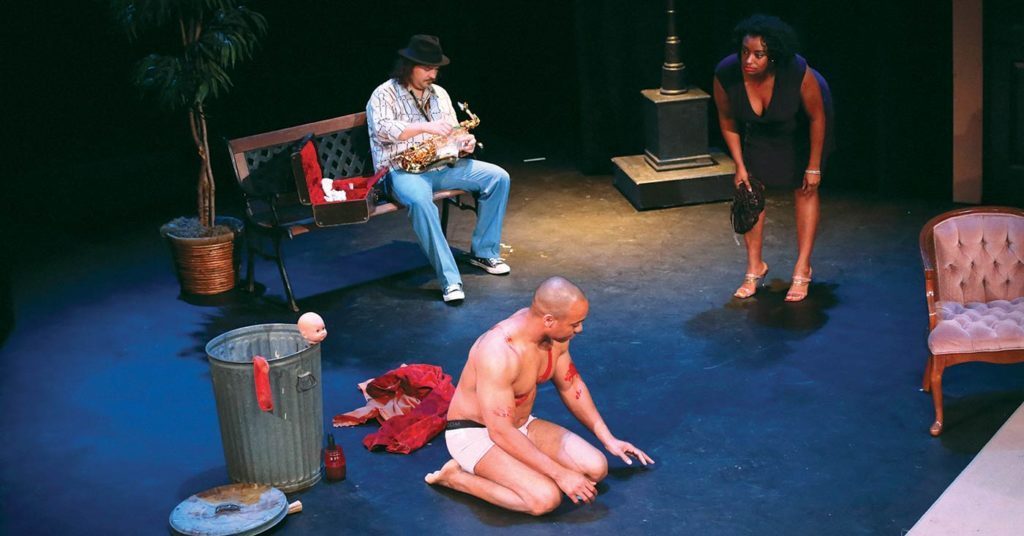 L-R: Anthony Franklin as the Muscle Man, Brian Schaffner as the saxophone player and Angela D. Williams as Katy Jume in ‘Mr. Universe.’

The Liminal Playhouse describes their mission as “to embrace, explore and celebrate the ambiguous and sometimes paradoxical, nature of our shared humanity.” From the very name of this theater company, you can imagine a space for plays that are a little odd or experimental, something that doesn’t fit neatly into any particular box. Jim Grimsley’s “Mr. Universe” feels right at home there. A story that includes two drag queens, a barely-clothed man covered in blood, a dead body found in a motel and a woman talking to her dead husband seems eccentric to say the least, but, by the end, it feels deeply, honestly human.

This was my first Liminal Playhouse play, and before it began, I was struck by the detail of the stage as set by director and scenic designer, Tony Prince. Even with the lights down, I saw a kitchen sink and stove with dirty pots still sitting atop, a bedroom with clothes strewn across the floor, a pile of discarded cigarettes near a park bench.

“This play is set in 1979,” Prince said in the introduction, “so we don’t want to hear any cell phones.” And as the streetlight glowed and the sounds of the saxophone (played by composer Brian Schaffner as a street musician) filled the theater, it did indeed feel as though we had been transported back in time to a fateful night on a street in 1979 New Orleans. With no platform to set it above the audience, it was the sort of stage that allowed you to forget it was a stage. As Juel Laurie (Heidi Yost), a frazzled woman who has yet to accept the death of her husband, dumped out her bag of trash, an old can rolled over to my feet and stayed throughout the first act.

The characters and dialogue also felt familiar. The audience seemed to be dropped in mid-conversation, with no stilted info dump needed. Tension spouted in fits and bursts, with the characters turning from arguing to cajoling to backstabbing to comforting, just like any group of people who knew each other too well. Even Katy’s (Angela D. Williams) monologues and outlandish stories felt like a conversation you might have with a friend after a long night. The explosive climax, complete with a knife fight, felt no less real… and truly frightening because of it.

“Mr. Universe’s” gift for making the audience feel like an invisible participant was enhanced by the fact that in every scene, there was at least one silent observer, engaged in the scene but rarely acting of their own accord. There was the saxophone player, who played as though this were just another night for him, though his music set the mood. In one genius moment when a character made a phone call, the sound of the sax served as the response on the other end of the line. Then there’s the mysterious, shirtless, bloody Muscle Man (played by Anthony Franklin), taken in by two drag queens named Vick (Michael Roberts) and Judy (Eric Sharp) along with Katy.

The Muscle Man’s silence led to speculation about his identity. Was he really, as Vick supposed, developmentally delayed or did he stay silent due to trauma? Or perhaps the Muscle Man chose not to talk so as to better observe the group. The play left the audience to wonder, rather than spoiling the story with a concrete answer. Though some characters claimed that he “didn’t understand what they were saying,” Franklin played him with animated expressions, chuckles and gestures that seemed to understand their discussions and sometimes less than honorable intentions well enough.

This play was a character lover’s dream. The most familiar, sympathetic character was undoubtedly Vick. Everyone knows someone like Vick, someone who wears themselves out to take care of everyone else. From the beginning, Vick was shown directing Juel Laurie back to her apartment, housing an ungrateful and troublesome roommate in Judy, letting Katy stay over when she lost her keys and taking in a bloody but attractive stranger, swearing not to take advantage of him or let anyone else do so. I couldn’t help but agree with Katy in wanting all good things for Vick, even if the play didn’t seem pointed in that direction. It all made sense when he revealed to Katy that he had a son through the woman he married before coming out. He and Katy bonded over their estranged children and that bond clearly impacted the careful way they dealt with the Muscle Man.

However, it was Katy and Judy who stood out as truly fascinating. Katy with her long-winded rants and her big secrets, but especially with the way she changed tone with each character. In one scene, she confided to Vick that she worried Judy was dealing drugs, while in the next scene it was revealed that she was helping him. Even when she finally told the truth, I found myself wondering if it was really the truth, and at the end of the play I was still not totally convinced.

Judy, meanwhile, was hard to love and impossible to look away from, thanks to Sharp’s emotion-filled portrayal. He manipulated and wreaked havoc. He caused only trouble for Vick and was intent on forcing himself on a clearly unwilling Muscle Man. One moment, he maniacally set up Katy and schemed to get the Muscle Man all to himself. The next moment, he held tightly to a frightened Katy, chin in her hair, as Juel Laurie — who seemed almost an oracle despite her steadfast belief that her dead husband was still there — warned them of the police coming to arrest Katy. Even as he finally cornered the Muscle Man, it would have been easy to hate him, but Sharp poured all of the rejection Judy had ever faced, all of his desperation and hurt, into one powerful breakdown that will stay with the audience long after this show closes. •