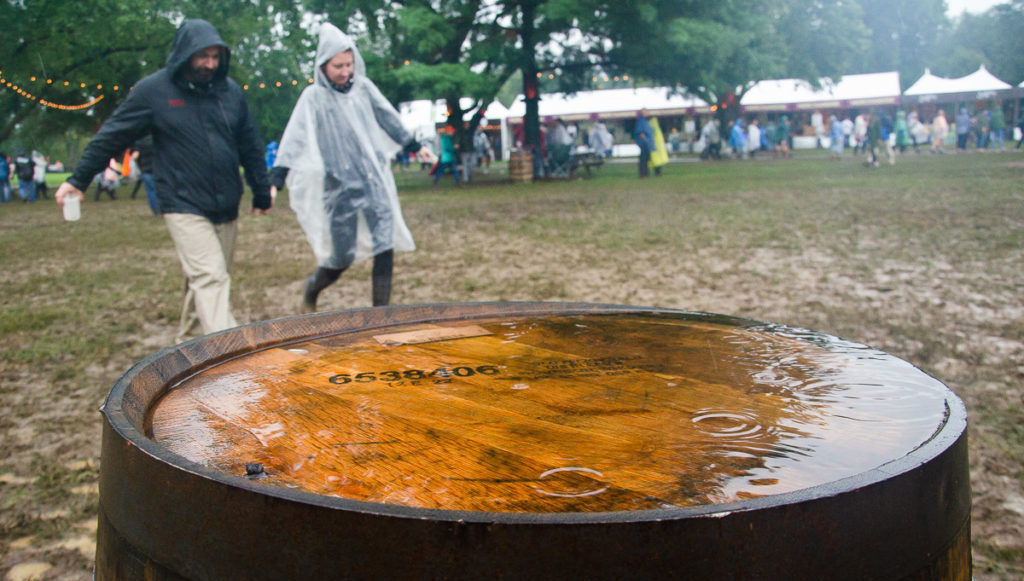 Opening day of Bourbon & Beyond on Saturday turned out to be the only day of the festival, as heavy rain forced the cancellation of Sunday’s events. City officials and B&B promoters agreed to shut down Champions Park, deeming the grounds “unsafe” and even “dangerous.” It was a difficult move on the promoters’ end, but Sunday I watched a single man wade through the pond that now occupies the front gates, shoes in hand. This was a good decision.

While rain didn’t appear to affect performance times of the musical acts Saturday, fans and vendors struggled to navigate the muddy terrain and still enjoy what the second annual Bourbon & Beyond festival had to offer.

Bourbon & Beyond stays true to its name with the high caliber of food and beverage provisions throughout, complemented by the several segments spotlighting master chefs and bourbon industry champions. It might seem like the music part of the festival is an afterthought with all of the emphasis on the distillery arts worlds. But let’s be real — nobody is going as nuts over tasting a batch as they are when seeing Sheryl Crow, David Byrne or John Mayer all perform live in one night — music is what brings the people out to play.

Byrne’s performance was the highlight of the day, considering that it’s really easy to forget about having mud inside of your boots when he’s on stage. Plus, Byrne live is always interesting. He entered the stage alone, barefoot and holding a life-size model of the human brain, to the lyrics of “Here,” the closing track from his recent solo output American Utopia. The rest of his group gradually joined him onstage, most of them also barefoot and matching in gray suits (what’s up, Stop Making Sense?). They were a diverse bunch of about a dozen musicians and dancers. With wireless guitars, synthesizers and the percussionists strapped on like they would be in a drum line, the performers moved freely about the stage, some movement choreographed expression and others improvised. Intoxicating is the word I keep repeating, as I remember the energy, especially after the face-melting synth solo of “Burning Down the House.” The set blended songs off Byrne’s recent album with other classic Talking Heads picks — “This Must Be the Place (Naive Melody),” “Once in a Lifetime,” “Slippery People” — but the most powerful moment, for me, was hearing them chant out the lyrics to Janelle Monáe’s “Hell You Talmbout” at the end of the set.

Sheryl Crow, who performed earlier during a rain-free hour, also kicked ass and definitely renewed an interest in her music beyond the career-defining songs that she opened with: “If It Makes You Happy,” “Everyday is a Winding Road” and “All I Wanna Do.” Her range as a musician showed as she vacillated between playing bass, guitar and keys throughout the set. She and Byrne were the only two artists to openly encourage people to register to vote (while there was booth on site for doing just that).

“I’m 56!” (crowd cheers) “I’m a woman!” (crowd cheers louder) And I have a song on the radio,” said Crow introducing her latest “Wouldn’t Want To Be Like You” near the end of the set (Annie Clark of St. Vincent sings backup on the original recording). In general, Crow is still a badass, and if you ever have a chance to see her on tour, you damn well should.

Other notes: Reignwolf is a fantastic live band, Lenny Kravitz has America’s best looking horn section, Brian Setzer of the Stray Cats is still a motherfucker on guitar, and John Mayer is totally gonna become the next Michael McDonald.

At a press conference on Sunday, event producer Danny Hayes explained the cancellation, saying, “Once we saw that for sure we were gonna get hit somewhere between midnight and 2 a.m. anywhere from three to five inches, there really is nothing left to discuss … The decision is not pleasant, but it’s easy and obvious that when it’s dangerous, it’s dangerous, and no one’s gonna risk it. There’s no financial consideration at that point. The real issue now is how to make these ground safe for next weekend.”

Whether this turn of events will impact the success of Louder than Life scheduled at Champions Park next weekend is uncertain, but the crew is committed to making the event happen. As of now, Bourbon & Beyond’s website is stripped down to a single PSA. Those planning to attend Louder Than Life are encouraged to stay up-to-date via LouderThanLifeFestival.com.