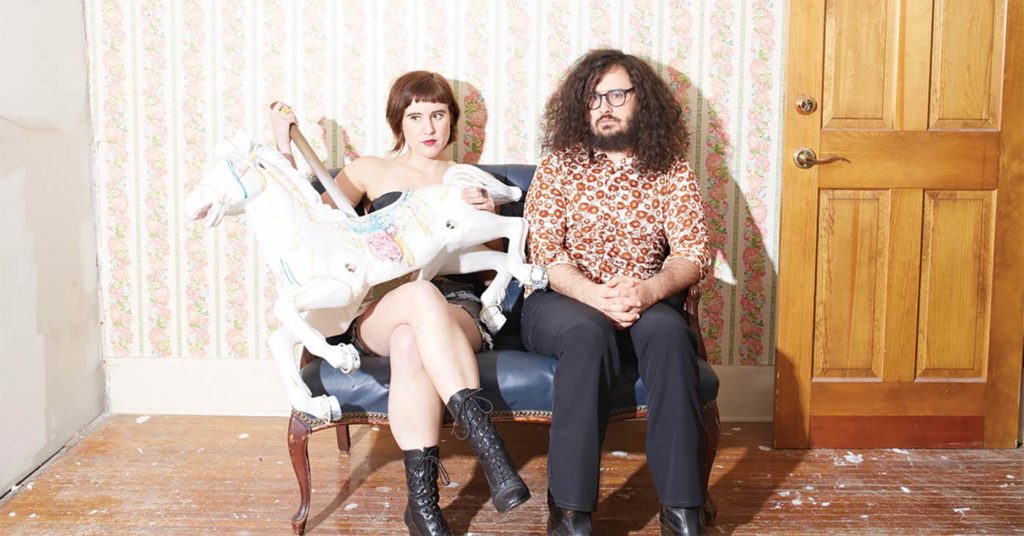 For Lung, the road was the crucible for their sophomore record, the highly-political, left-leaning All the King’s Horses. The duo, cellist Kate Wakefield and drummer Daisy Caplan, kicked off their tour in May, snaking through the country, dodging West Coast wildfires and digging deep into the heartland, stopping at venues big and small, in both blue cities and red towns.

“We played a bar where the owner had a Trump sticker, a cowboy bar in Texas,” said Caplan. “We didn’t pull any punches. It worked, but there was some tension there. It was interesting to see how, at this point in much bigger cities, people don’t want to deal with Republicans at all, because the president is an infantile racist.”

All the King’s Horses tackles a range of subjects, acting as a reflection of contemporary America — such as the anti-rape culture song “Brock” (as in Brock Turner), explorations of interpersonal relationships in the digital age and a haunting cover of David Bowie’s “I’m Afraid of Americans.” The record looks at the balance between nature and nurture, with recurring themes of animal imagery, part savage and part domestic and liable to turn on a dime. A reference to the nursery rhyme “Humpty Dumpty,” All the King’s Horses addresses the vulnerability in our culture, and the various ways in which it appears. Supporting the lyrical narrative is a malaise that manifests itself in intense and seething melodies, the cello used an instrument of unfettered rage, the counterpart to Wakefield’s wavering vibrato.

“Power and powerlessness goes across all the tracks,” Wakefield said. “With everything going on in the world, we have a lot of power, and powerlessness as well. There are a lot of themes on the record about how fragile your own mental states are. The powerlessness that you feel, when you’re taken over by the darker sides of brain.”

That power balance takes a variety of forms. On “Subhuman Nation,” the band riffs on the circular, mundane march of a structured life, that robotic feeling that Wakefield evokes with the line, “You are just a machine / you are part of the problem,” speaking to how people balance their jobs and responsibilities without room for much else.

“We’re all just really trying to be comfortable,” said Wakefield. “Everyone is so afraid. All we want is to go home and watch our Netflix and sleep right at night. Everyone just wants a vacation. We’re on autopilot for these small comforts. That’s how we make it — how we’re not living our lives, but that we’re just being moved.”

All the King’s Horses is much more aggressive than Lung’s first album. It rails against injustice, whether that’s on a personal or social level.

“We still live in a very much patriarchal boys club of a society, and any time you feel like it is changing, you are reminded by subtle and not-subtle jabs,” said Wakefield.

The record also explores the dynamics of love in the Tinder age and how easy it is to move from one person to the next. On “Placeholder,” when Wakefield sings, “I know that I remind you of the love you left behind you,” she does so without pretense.

“People look at people in a more disposable way,” she said. “You can just swipe right or left. That song is about wanting to have a connection, but it wasn’t really a connection. I think that everyone can relate to that.”

Whether they are calling out a broken system by examining a miscarriage of justice, or looking at the interchangeability of people as rendered by the continued erosion of privacy, Wakefield and Caplan remain committed to connecting on a personal level, by talking about the big, sweeping issues, even if they have to do it one house show at a time.

“It’s part of one of my things of being a better person — is wanting to be there for other people,” Wakefield said. “I am very pro-being there for people’s experiences.” •