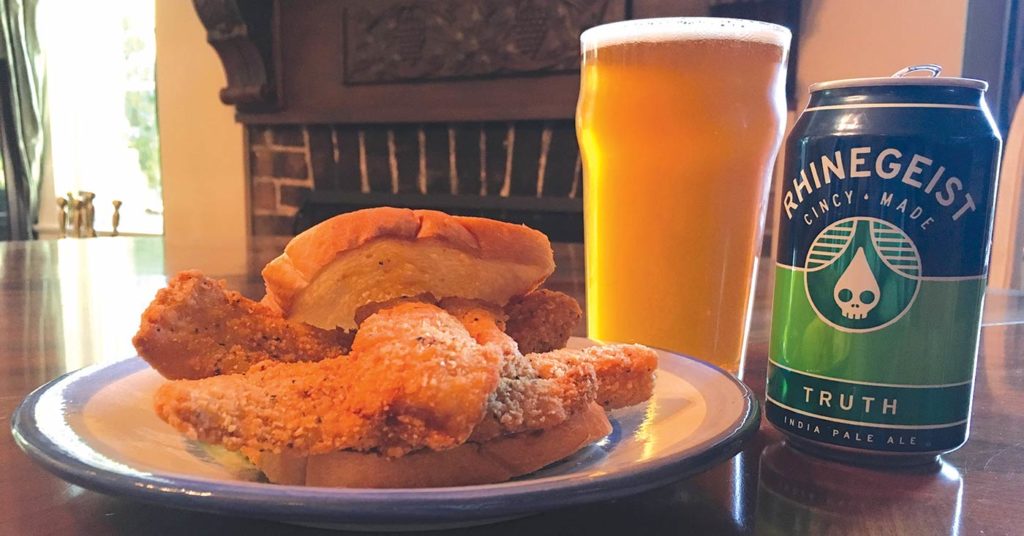 Louisvillians have a long-standing love affair with fried fish. This is probably due in no small part to the 19th-century influx of immigrants from Ireland and southern Germany. These were the people who built so many of our city’s big Catholic churches and, therefore, started the Lenten (and beyond) tradition of Friday night fish fries. Plus, for decades, before the arrival of the UPS hub bearing fresh seafood, fried fish was almost the only choice, because fillets could be frozen and shipped here. And, of course, what’s not to like about good fried fish?

Since we are in Kentucky, our fish is most often battered in corn meal or some blend of corn meal and flour. Occasionally, an adventurous cook will throw some grits into the mix for extra crunch. But, we haven’t given up on that crispy golden fish. It’s simply tradition. When I was growing up here in the 1960s, there were three really popular go-to fried fish hangouts.

Kingfish on River Road (the one perched on the edge of Caperton Swamp between Blankenbaker Lane and Indian Hills Trail and long since torn down, not the shiny “new” one overlooking the river near Zorn Avenue) had a signature fish box for two that contained big filets of fried fish, crinkly fries and hush puppies. Kingfish is still around, of course. But to me, it has lost a lot of its gritty charm. (Hushpuppies there are still addictively good.)

There was the Cape Codder in St. Matthews. Strictly take-out, its home was an actual Cape Cod style house on Weisner Ave. (After the restaurant closed, it was an insurance agent’s office for many years until it was torn down.) There were colored lanterns, a framed map of Cape Cod, wood panelling and waiting benches covered in sea blue vinyl attached to the walls. My mother and brother and I spend a lot of time waiting on those blue benches for our orders of crispy, salty cod to be prepared. We’d go there when my dad was out of town on “business” (i.e. attending the races at Keeneland), since he was the only one in the family who didn’t like fish.

By the way, the Cape Codder was reincarnated decades ago as Clarksville Seafood on Eastern Boulevard. So if you thought it was gone forever, never fear. You just have to cross the mighty Ohio to visit it again. And yes, if you loved it, you will not balk at paying the Interstate 65 toll.

The third favorite fried fish outpost was Mike Linnig’s off Dixie Highway near Valley Station. Notable for it’s vast outdoor lawn of picnic tables, I didn’t really discover it until I was an adult. (I was a childhood captive in The East End.) Jars of its famous tartar sauce have been sold in groceries all over town for years.

Other fried fish outlets, including chains, have come and gone. I still miss Stan’s Fish Sandwich. The Fishery, Moby Dick and Long John Silver’s (founded in Lexington, it as once part of the Yum Brands Empire), are still players.

But, my go-to, take-out fried fish these days come from a tiny outpost near the University of Louisville and takes a bit of an effort to find. The Hill Street Fish Fry sits on a little island of a block formed by Brook and First Streets and Hill Street and Hillbend Place. There’s parking for about six cars and seating for maybe a dozen diners.

So call ahead and order a Super Whitefish Sandwich as carry-out. It contains three lightly seasoned crispy filets that are moist and tender, almost delicate, without excessive grease. Each sandwich is hand-battered and cooked to order. The tartar sauce is made in-house. In addition to slaw and fries, you can order fried veggies such as mushroom buttons, cauliflower and okra. Fried clams, shrimp and crab cakes grace the menu, too.

I dash home with my hot fish sandwich to eat accompanied by a cold, hoppy Rhinegeist Truth IPA, widely available at area liquor retailers, not to mention served on tap in many restaurants. Brewed in Cincinnati, it represents another Ohio Valley tradition handed down from German immigrants — good beer. The name, which means “Ghost of the Rhine,” harkens back to those enterprising brewers from the old country.