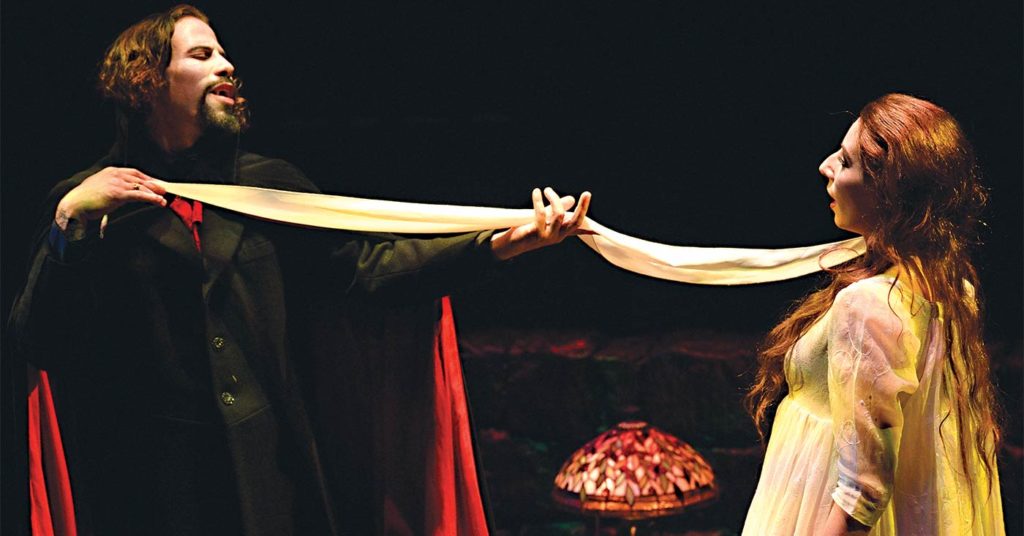 “Dracula” has visited Actors Theatre every fall for the past 23 years. He’s become a standard for Halloween in Louisville, although, as the show’s success grows, his stay has grown longer, with the show now opening as early as the first week of September. I’ve seen “Dracula” six years in a row. So it’s impressive that, for all that, I found myself saying, “Well, that’s new,” in the very first scene. And it wasn’t the only time I felt that way. From an expanded ensemble to new endings for old characters, this version of Fifth Third Bank’s “Dracula” has plenty of new material.

Last year, William McNulty — the original director and Van Helsing actor, as well as the one to adapt John L. Balderston’s script for Actors Theatre — announced that he would not be returning to the production in 2018. Drew Fracher stepped up as director, while Grant Goodman took over the role of the famous vampire hunter. In fact, of the entire 2018 cast, only two are returning from previous years: Neill Robertson as Renfield and 10-year-old Brylee Deuser, playing a tragically young and monstrous undead girl.

Santino Craven (with a name that makes his casting as the Gothic King of Vampires seem almost inevitable) offers a younger take on a classic villain. It’s strange to hear him refer to himself as a “relic of a bygone era,” but it doesn’t exactly ring false — after all, his character is hundreds of years old. Rather, his appearance mixed with his Old World manners only adds to his mystique. His Dracula is swaggering and sensual, and his terrifying charm isn’t reserved for only young Victorian ladies. In their first meeting, as Van Helsing presses Dracula for details of his home, Dracula promises with an almost flirtatious air to discuss it later “when he has him all to himself.”

Goodman’s Van Helsing is also a younger rendition than in previous productions, though he retains the “wise older uncle” role as his three companions are younger still. Kurt Uy’s Dr. Seward still mourns his lost Mina (Kayla Peters), but he also has a bit of bubbling excitement to him at the potential of adventure. Crystian Wiltshire and Rin Allen as Jonathan Harker and Lucy Westfall are sweet, determined lovers — not quite wide-eyed, but certainly hopeful, despite the opposition. They’re a lovable bunch, both fighting to survive and honestly thrilled by the chase. You can’t help but root for them.

Some things remain the same, of course. The lighting and sound effects (designed by Tony Penna and Benjamin Marcum respectively, as well as Media Designer Philip Allgeier) are as stunning, startling and spooky as ever. The fight scenes, choreographed by fight director Jake Guinn, are just as thrilling if not more so because of the larger, undead ensemble. Ms. Sullivan and Mr. Briggs (played by members of the apprentice company, Silvia Daly Bond and Jonathan Moises Olivares) are still funny and tragic by turns. The script is largely familiar with only small changes, but those changes have a dramatic effect.

One of the changes that created the most buzz was the way Lucy was handled in this production. For as long as I’ve seen the show, Lucy has been part of the team, both victim and hero, but never have I seen a production so dedicated to her agency. Her transformation scene is less brutal — and in some ways more emotionally brutal as the figure of her best friend is among a whole host of undead brides forcing her into the ritual, which truly feels like a “dark wedding.” I hesitate to call it more empowering, because, whether she drinks blood from his chest or blood from a chalice, it’s still blood that she didn’t want to drink, a choice that she didn’t want to make. What is empowering, however, is watching Lucy (finally clad in pants, because fighting a vampire in a Victorian gown just isn’t practical) drive a stake into the heart of her attacker. It’s a wide role to play — from a grieving, frightened young woman to a power hungry spy of Dracula’s to a victorious vampire hunter — and Allen blends it all seamlessly. As everyone else exits the stage and the lights go down, it’s Lucy who turns back to look at the scene. It feels then as though it’s Lucy’s story more than any of the men.

But it was the change to the character of Renfield that most struck me. Renfield is an easy character to play for comic relief — in fact, that’s often his role. But Robertson never forgets the constant fear in which Renfield lives, the need for freedom or the human element. After all, he’s as much a victim as Lucy or Ms. Sullivan. The nuance given to the character makes me hope for a better ending, and when he rushes out to face the remains of his master and declares, “I’m free!” I find myself holding my breath, waiting for the other shoe to drop. You can see it in Renfield’s face, too. But it never does. There’s no last minute attack for shock value. Instead, Van Helsing wraps an arm around him and leads him off-stage where he can begin the rest of his life… free.