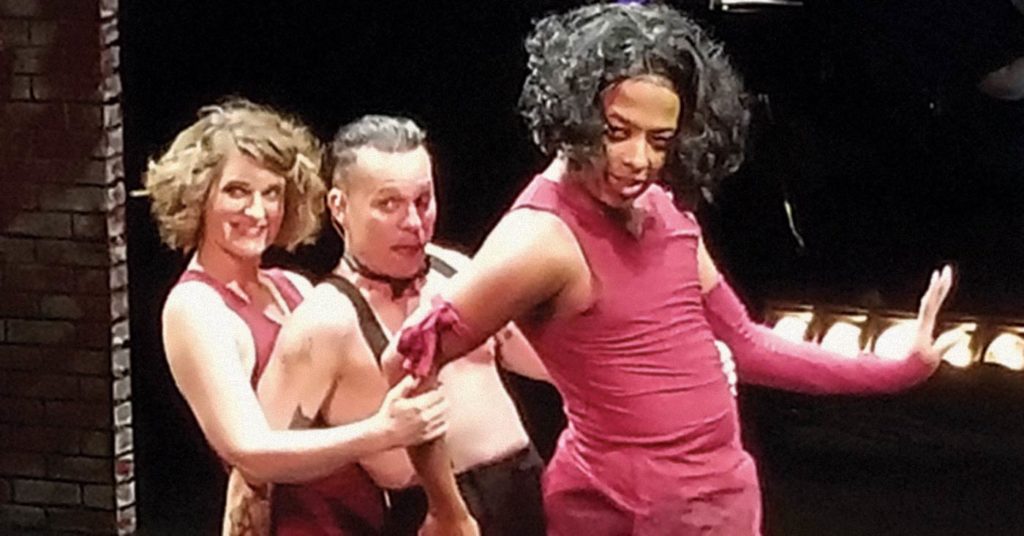 I can sing from memory dozens of songs from the American musical theater. I enjoy the genre immensely.

I also have this sort of lazy, not very well-considered notion that it’s the most conservative, risk-averse category of modern theater, one overflowing with fantasy and romantic clichés.

At least, that’s what I think until I actually start to think.

Then, I remember moments like the interracial romance in “South Pacific,” the treatment of race in “Porgy and Bess,” the exploration of AIDS in “Rent” and the critique of corporate power in “Urinetown.”

And yet, even among those plays, the simple fact that “Cabaret” exists continues to astonish me.

Sometime in the early 1960s, the team of Joe Masteroff (who wrote the book), John Kander (lyrics) and Fred Ebb (lyrics) decided to create a piece of musical theater based on stories and novellas that Christopher Isherwood had written about his life in Berlin, between 1929 and 1933. Those were years of cultural and sexual turmoil and political chaos that eventually saw the rise of the Nazi regime in Germany. It’s as unlikely — and artistically heroic — a project as ever found its way to the American stage. And over the decades, “Cabaret,” its theatrical revivals and the later, a quite loosely-adapted film version, have won an enormous number of awards.

Isherwood was a young man in those years. His stories (which are now collected in a volume called “The Berlin Stories”) comprise a beautifully-written account of an extraordinary moment in history. He was a closeted, gay Englishman and an aspiring writer who had come to Berlin to immerse himself in the intellectually-rich and sexually-transgressive world of the Weimar Republic.

Isherwood’s account of that period is, itself, slightly closeted. It’s populated with deftly-drawn characters from all walks of life. One of his pieces, “A Berlin Diary,” includes the lines, “I am a camera with its shutter open, quite passive, recording, not thinking.” That first phrase, “I am a camera,” became the title of a 1951 stage adaptation by John Van Druten.

But, of course, Isherwood was thinking. And he cultivates an aura of unemotional, nonjudgmental, camera-like detachment as he depicts the inexorable and incomprehensible unraveling of German society. The genius of his book — in its way a more telling account of that era than a conventional history — is that it depicts that world in present tense, the only tense a camera knows. For her book, “Eichmann in Jerusalem,” Hannah Arendt used the subtitle, “A Report on the Banality of Evil.” That subtitle could equally well apply to Isherwood’s pieces.

In its granular details — names, relationships, places — the musical “Cabaret” is far removed from Isherwood’s text and the 1951 play. But, that’s immaterial: On its own rights, the musical stands as a great piece of art. And the current Pandora Productions (based on the 1998 revival) brings it alive with all the dark, disturbing beauty it deserves. Be advised: This production will almost certainly sell out.

The musical “Cabaret” shifts back and forth between the licentious world of cabarets and the staid, slightly-seedy world of middle-class Berliners.

The Kit Kat Club — the cabaret is a classic fleshpot where anybody is the sum of her (or his) parts, and where every body is for sale. Jack Wallen plays the Emcee of this club with a cold ferocious glee and boundless energy that is matched by his corps of Kit Kat Girls (Jessica Sharpenstrein, Molly Kays, Tymica Prince, Maggie Patten, Erin Jump and Mandy Kramer) and Kit Kat Boys (Remy Sisk, Dalen Payton, Alfie Jones and Landy Saavedra — all the Boys are triple-cast in this production). Other notable Berliners include Scott Goodman as Max Courtney Glenney as a beggar and Amanda Kyle Lahti in an excellent portrayal of Fraulein Kost, a platinum blonde woman of ill repute.

Choreographer Maggie Patten has done outstanding work here; every production number is flat-out amazing. And Music Director Alex Roby elicits wonderfully executed ensemble and solo vocal work throughout (on opening night, the seven-piece live band faltered a time or two, but found its groove by the end of the show).

The start of the Cabaret show, of course, is the infamous Sally Bowles (Lauren McCombs), whose romance with Cliff (Jordan Price), a young American writer (one of the plays adaptations), drives one of the play’s main plot lines. Fine casting here. Price brings an earnest, guileless wit into this world that plays well against McCombs’ portrayal of Sally’s sly, amoral instincts.

There is little question that the play foregrounds the relationship between Sally and Cliff, but it’s the budding romantic relationship between Cliff’s landlady, Fraulein Schneider (Georgette Kleier) and the Jewish fruit vendor Herr Schultz (Jim Hesselman) that forms the emotional core of the story. Kleier and Hesselman inhabit the trajectory of that relationship in all its stages with uncanny grace and authority.

“Cabaret” is a massively complex play filled with verbal, visual and musical details that yield startling epiphanies. Producer/Director Michael J. Drury harnesses all those details to unleash a fast-moving narrative of shattering power. Pandora has an extensive track record of successfully tackling major works. But even against that backdrop, this “Cabaret” stands out as special artistic achievement at an important moment. •

Over the last few years, a grant from the Roy Cockrum Foundation has enabled the Professional Training Company at Actors Theatre of Louisville (formerly the Apprentice company) to expand the frequency and ambition of its offerings. This year’s PTC started its season last week with “Electric Harvest,” a work devised by company members in collaboration with playwright A. Rey Pamatmat (“Edith Can Shoot Things and Hit Them,” among other credits), and directed by Jane B. Jones.

Set in the Victorian confines of the Conrad-Caldwell House Museum on St. James Court, the play was a droll pop culture mash-up of a surreal reality show (think “Great British Bake Off”) in the form of an immersive haunted house tour with creepy monsters, references to the “Great British Bake Off” and plenty of wit rooted in the moment. Many PTC productions are free but ticketed. It’s a great way to see works by talented folks early in their careers. Follow ATL on social media to keep up. Or check actorstheatre.org. •