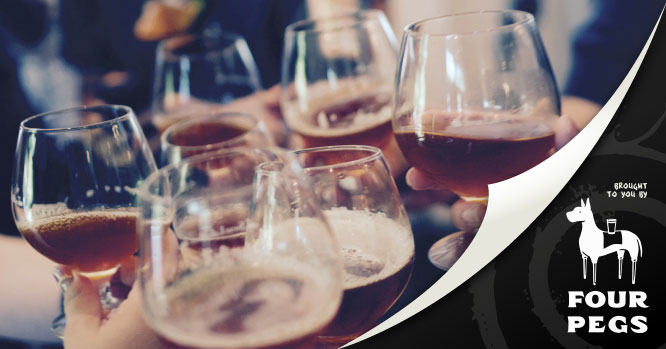 Beers aged in bourbon barrels are wildly popular among craft beer fans, and, while the relatively young practice wasn’t born here, it does have a Louisville-centric legacy of its own.

That said, we know barrels and beer have been friends for a long time — how else would we have a traditional song called “Beer Barrel Polka”? European beer makers began storing beer in barrels centuries ago, but that was, of course, before bourbon. The goal then wasn’t to add flavor to the beer, but rather to simply have something durable to store and ship it in.

Then, in 1992, Greg Hall decided to pour beer into a few oak barrels that had been used to age Jim Beam, and a new era was born. This experiment at the Great American Beer Festival led to a beer called Goose Island Beer Company Bourbon County Stout, believed to be the first bourbon barrel-aged beer, or at least the first to gain popularity. Today, nearly every craft brewery experiments with barrels on some level.

Louisville has its own heritage of bourbon barrel aging and the direct descendant of those first experiments remains today in the form of Goodwood Bourbon Barrel Stout.

I spoke with Goodwood COO and Brewmaster Joel Halbleib about that beer, and he confirmed to me that Bourbon Barrel Stout dates back to a long-extinct Louisville brewery called Pipkin Brewing, which brewed and operated in the space that is now Goodwood.

That bourbon barrel stout Pipkin released happened in the early 1990s, likely not long after Hall’s revelation. Former Bluegrass Brewing Co. brewer David Pierce had a hand in formulating that beer, and, when Pipkin closed, a group of BBC regulars pooled their money to buy the brewery.

It became an independently-owned offshoot of the BBC brewpub in St. Matthews (and later two other locations) and the rebranded brewery continued to make a version of that original bourbon barrel stout, with Pierce and Halbleib involved. When the current ownership of the former BBC production brewery at Clay and East Main streets decided to rebrand the business to Goodwood Brewing in 2015, the Bourbon Barrel Stout remained.

“It’s been tweaked,” Halbleib said of the beer’s recipe. “I added more roasted malts. But it does have roots going back to Pipkin.”

And it remains one of Goodwood’s best sellers across the region. After more than a quarter-century, bourbon barrel stouts, porters, ales and barleywines seem to be a mainstay in the industry.

The rise of bourbon’s popularity coinciding with the rise of craft beer hasn’t hurt. And because one of the laws of bourbon distilling says that a barrel can be used only once, well, that leaves a lot of barrels leftover for experimentation, especially here in Kentucky. Many of those head overseas to age Scotch and some go to Mexico to age tequila, but breweries across the world also put those barrels to good use.

What the barrels add to the beer are floral aromas, not to mention flavors of oak, vanilla, caramel and more. The bold flavors might overtake some beer styles — you don’t see a lot of barrel-aged pilsners — but higher-gravity beers like imperial stouts and barleywines are particularly good aged in barrels because the beer’s natural flavors don’t get overwhelmed by the bourbon.

“It’s a marriage that works,” Halbleib said. “They seem to go hand in hand. When you bring char, oak and bourbon flavors into some beers, it’s wonderful.”

And there’s plenty of room for experimenting with all those flavors. More than just using a random barrel, brewers now target specific bourbon barrels from specific distilleries and even specific batches; for example, BBC once released a Jefferson’s Reserve version of Bourbon Barrel Stout. And the amount of time the beer spends in the barrel has a big impact as well, on flavor and on alcohol content.

Some of the small-batch bourbon barrel beers, as Halbleib pointed out, will be collected, traded and sold in the secondary market, sometimes selling for thousands of dollars.

As long as bourbon is booming, it’s a good bet those leftover barrels are going to be put to good use and Louisville is in a good position to have access to those barrels. Just refer back to this year’s Kentucky Craft Bash, wherein Willett Distillery provided barrels to more than two dozen Kentucky breweries for specialty beers that were released at the festival.

“I think it’s here to stay,” Halbleib said of the relatively young tradition of marrying beer with bourbon barrels. “It’s like any other ingredient, really. It has a flavor impact and that will always be useful in brewing.” •