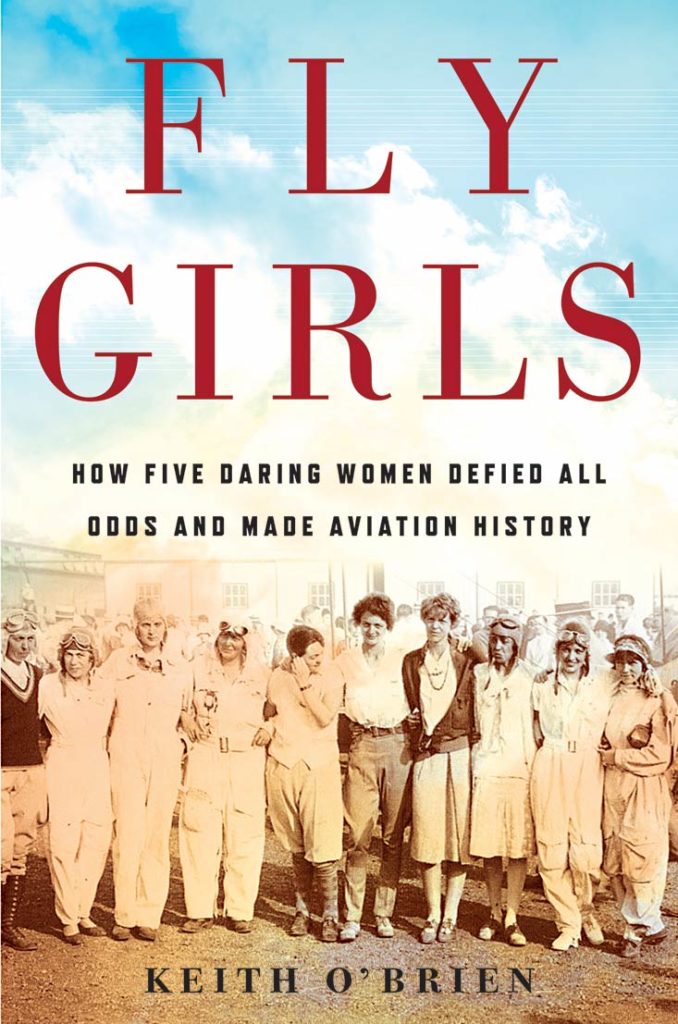 You don’t have to be a devoted reader of the history of women’s progress in the 20th century, or of the early days of aviation, to be frequently swept up in the tales laid out here by veteran journalist Keith O’Brien. He has five main subjects here — women who took to the air in the ‘20s and ‘30s. They faced all kinds of challenges — for example, finding sponsors and crews to help them get the latest (which often meant safest) planes. Also, they faced sexism and tokenism that could come out from family or society, while they worked to maintain their integrity as explorers. That is, professionals at putting nuts-and-bolts in place to serve an insatiable wanderlust.

Amelia Earhart is already an historical figure, with complete books on her triumphs and enigmatic disappearance. Here, she’s just one among several at the forefront. Like the others, she wins and loses races, and she sets records that are then broken, driving her onward and toward more risk. She finds fame and fortune that rise and fall in response to the capricious demands of the curious crowd, plus those of the early aircraft manufacturers who want to get their brands recognized.

Not long after introductions to Earhart and the other fliers who get primary attention, O’Brien curiously zooms in on another character: an air-race promoter. When the women get their own sideshow version of a race (disparagingly called “The Powder Puff Derby”), and when there are breakthroughs (notably Louise Thaden’s win in a major open-to-all endurance race), the promoter is a stand-in for all the gatekeepers. There are many — most self-appointed; many ready to hinder progress; and some well-meaning but not aligned with the spirit that the Fly Girls nurtured among themselves. But the author really digs into the diverse backgrounds of Earhart, Thaden, Ruth Elder and Ruth Rowland Nichols and the particularly-rambunctious Florence Klingensmith. O’Brien leaves no doubt that each is a full-blooded person up in the air, risking her life while trusting that the wing’s fabric stays in place and the spruce structures don’t snap when facing headwinds at a 180 mph.

There’s a bit of potential to compare this book to Tom Wolfe’s classic “The Right Stuff.” Both look at a group that went skyward as pioneers, while peers succumbed to the dangers — all with America’s cultural and media circus playing an important role. But Wolfe wanted the facts to serve as a launchpad for his stylistic artistry, and O’Brien has no such agenda. He may sometimes let a surfeit of facts and subsequent interpretation fill up spaces that might’ve made for an even more compelling read. But it’s thorough research on display, and the author’s enthusiasm for reporting rivals the enthusiasm shown by his daring subjects.

Besides, O’Brien finds moments where he summons poetic power. (“The two women did not speak of winning the Bendix. They just flew: over the flatlands where Thaden had gotten her start selling coal a decade earlier and the jagged mountains that the men had once warned were too dangerous for female pilots to cross…”) You can see the seams in some places, where he’s stretching in the service of wonderment, but he doesn’t muddy up correlations to suggest dramatic cause-and-effect. By not crossing that line and bringing to light a grand and underreported story, O’Brien’s delivered on the promise of popular history.