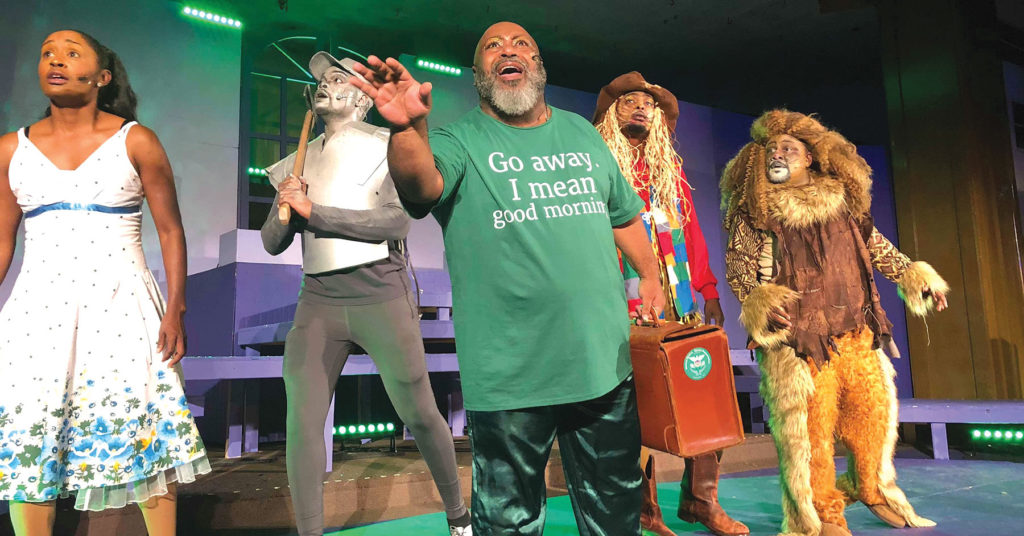 In late May, I wrote that Faith Works Studios’ production of August Wilson’s masterpiece “Fences” (directed by Kristi Papailler) was the strongest that I had ever seen from a brand-new theater company. A month later, the company returned “Steel Magnolias” in a fine production helmed by Rush Trowel, founder and leader of the troupe.

And now, as the company closes its first summer season with a jubilant production of “The Wiz Jr.,” a musical far more ambitious than its title suggests, I will say the same thing about Faith Works’ first season. It’s rare indeed for a new company to undertake three plays as varied as this over the course of a single short season and pull them all off with this kind of authority.

“The Wiz Jr,” superbly directed here by William Mack, is an abridged, family-friendly version of the 1974 musical that hit the stage with the unabridged title, “The Wiz: The Super Soul Musical ‘Wonderful Wizard of Oz.” The unabridged play ran on Broadway for four years and earned seven Tony Awards, including Best Musical.

The play spawned a film version with Diana Ross, Michael Jackson, Richard Pryor, Nipsey Russell and Lena Horne in key roles. The critics (and audiences) rejected the film — with good reason. If your only exposure to “The Wiz” is the big screen version, I urge you to give it another chance and take in this sparkling piece of theater, which runs about two hours, including intermission. And I urge you to get your tickets asap. On the night I attended, the show was nearly sold out and, at this writing other sold out performances, have been announced.

“The Wiz Jr.,” with book by William F. Brown and music and lyrics by Charlie Smalls, is, of course, an updated take on L. Frank Baum’s “Wizard of Oz” tales, as filtered through the 1939 film with Judy Garland in the starring role. But this version is rooted in the musical vernacular of the ‘70s, a blend of R&B, soul and funk, with evocations of traditional spirituals splashed around here and there. My impression, though I didn’t compare scripts, is that this version has been edited for brevity and content. The production is billed as a “Family Experience,” and it seems as suitable for youngsters as it is fun for grownups.

The tale follows the original template. A tornado whirls Dorothy (Cherrie Vaughn) and her home in Kansas to the magical land of Oz, where the house inadvertently crushes a wicked witch. She meets up with some Munchkins and a good witch named Addaperle (Elisha Wimsatt) and sets forth on a yellow brick road to meet the Wiz. The story is familiar, but there are plenty of droll twists. When Addaperle presents Dorothy with the dead witch’s slippers, they’re silver, rather than ruby-colored — and Addaperle, says to Dorothy, “I hope you don’t mind second-hand shoes.”

On her way to The Wiz, Dorothy collects her entourage, a Scarecrow (Sadik Ibn-Mohammed), a Tin Man (Isaiah Archie) and a not-very-fearsome Lion (Antonio Taylor).

These four travelers are a delight. Vaughn brings a shimmering, innocent voice and an earnest presence to the role. And Claudette McCracken (costumes), Reggie Johnson (hair) and Keisha Dorsey (makeup) have done brilliant work in shaping these three characters — well, the entire cast, actually. Scarecrow looks like a rusticated court jester, done up in a particolored patchwork quilt, and a shabby hat that rests atop straw-colored locks that dangle to his chest. The tap-dancing Tin Man’s shining sheath is impeccably designed, and Lion’s majestic garb plays like a brilliant parody of an over-the-top villain from one of those vintage blaxploitation films.

The designers have lavished attention on The Wiz (played by Troy Bell), as well. When we first see him, he looms large, like an otherworldly George Clinton descending from the Mothership.

The Russell Theatre is not a modern theater venue. It was designed as a junior high school auditorium. But that hardly hinders this ambitious, large-scale production, with scenic design by Gerry Kean and lighting by Martin French.

The sound was effective, as well, though no sound designer was credited in the information I received after the fact (regrettably, no programs were available at the performance on the night I attended).

The recorded score is loud and boisterous, but this is a cast well-stocked with big, beautiful, commanding voices, and the mix and acoustics were clear and clean.

In the opening scene, Angela Williams Buckner (Aunt Em) addresses the rebellious Dorothy with the poignant, “The Feeling We Once Had.” Morgan Younge is formidable as Evillene, the Wicked Witch, who gives her minions (including her cowering Lord High Under, played by MarKeith Scott), a Trump-like message in the surging rhythms of her signature number “Don’t Bring Me No Bad News.” And Jennifer Howland Dillavou, as Glinda, the Good Witch of the North, sends Dorothy back home with a moving “Believe in Yourself.” (Offstage background vocals sung live by Anitra Allen, Troy Bell and Angela Williams Buckker enrich the sound in several scenes.)

I will say it one more time: This is an ambitious staging of a complicated work in a relatively simple venue. It in involves a sizeable cast, splashy production numbers and demanding design work all around.

Director Mack and his crew and cast have done a phenomenal job of bringing this play to the stage in a bravura, fast-paced performance that is a blast to watch. During his pre-performance remarks, Producer Rush Trowel noted that the company has ambitious plans both for the space and for future productions. Given what this new company has achieved during the last few months, my advice is to pay attention. And acquaint yourself with this company as soon as you can.