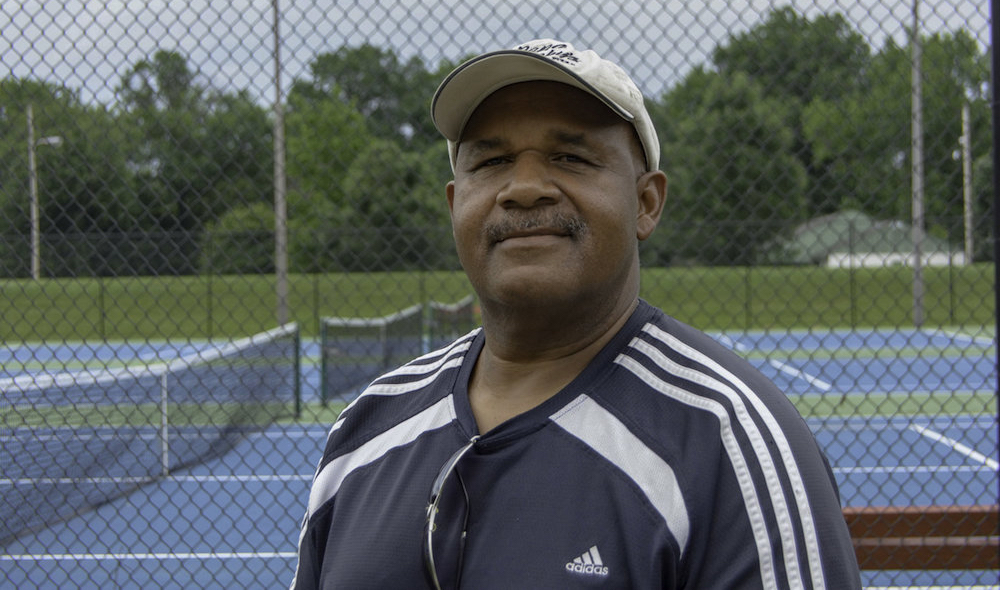 July 26, 2018
Mr. Donnie, Chickasaw
“I’m the director of the West Louisville Tennis Club. When we first had our opening day, we had about 70 parents and kids out here. Every Thursday at six o’clock, we have free tennis lessons. We’re a nonprofit organization that plays tennis here and have been here for decades. We travel to different cities to play other clubs, too.

As of today, there are only two blacks who were inducted into the Kentucky Tennis Hall of Fame and that’s Arthur Lloyd Johnson and my friend Bruce Stone. That’s part of the legacy of the West Louisville Tennis Club.

I’m a certified tennis coach and I work for the United States Tennis Association. That’s the same organization that pays Venus and Serena Williams. We have a chapter here called the USTA of Kentucky. I’ve been in different schools, targeting the area that’s not exposed to tennis. So, we’ve been to all of the West End schools trying to expose African-American youth to tennis.

This is the home court for St. Francis and Central High School. It’s been a decade since Central’s had a tennis team, so it’s been pretty good for the community. Hopefully, we can continue this venture with the community, exposing kids to another sport. Not only that, we’re just trying to help raise kids in the community.

My brother, Frank, introduced me to tennis. He really got excited when Arthur Ashe won the Wimbledon in 1975. He went out and bought a couple of rackets and I didn’t have a choice but to come out and play with him. He taught me how to play. That was in the mid-’70s, and I’ve been playing ever since. As the years went by, I realized that it’s one of those sports that you can play in your 70s and 80s. I had a cousin that played until he was 83 years old. It’s one of those sports that gets under your skin and you can’t help it. You can’t play basketball and football forever.

We do a lot of fellowshipping and having fun out here. Plus, you get to stay in some type of shape. It’s a lot of fun. We have tournaments where people will come in from all over and get points. If they earn so many points, they can go to New York.

I’ve been kind of disappointed and hurt by West Louisville’s crime situation. I started an organization called ‘Prevention 2000’ which is about keeping kids safe. My wife, my daughter and I would go teach kids about stranger danger but I’m really concerned with the number of deaths that we had.

I’m concerned about the lack of affordable housing and jobs. If people can’t work, they can’t live. There’s no affordable housing here. The ones that are available, are getting bought by investors that don’t live here nor care about the community. If you can’t work and have a safe place to live, what kind of quality of life do you have? It seems like no one wants to get really involved in matters, such as this, until it affects them and that’s too late. We need to be more proactive with those things and the community will be much better, as a whole.”

July 26, 2018
Charles (right), Marion (left), Shawnee
“This is my son. He’s 9 and I’m 62. I got a clean slate, right here. I have two older sons. In my early life, I tried to stay focused on providing safe and comfortable surroundings and making it nice for my family. I missed out on a lot. This is my second go round. My mother said that God is giving me another chance. I missed so much with my first two. Now, I see it. I’m able to be here. I’m getting to pass my knowledge to him and that’s the benefit.”  •