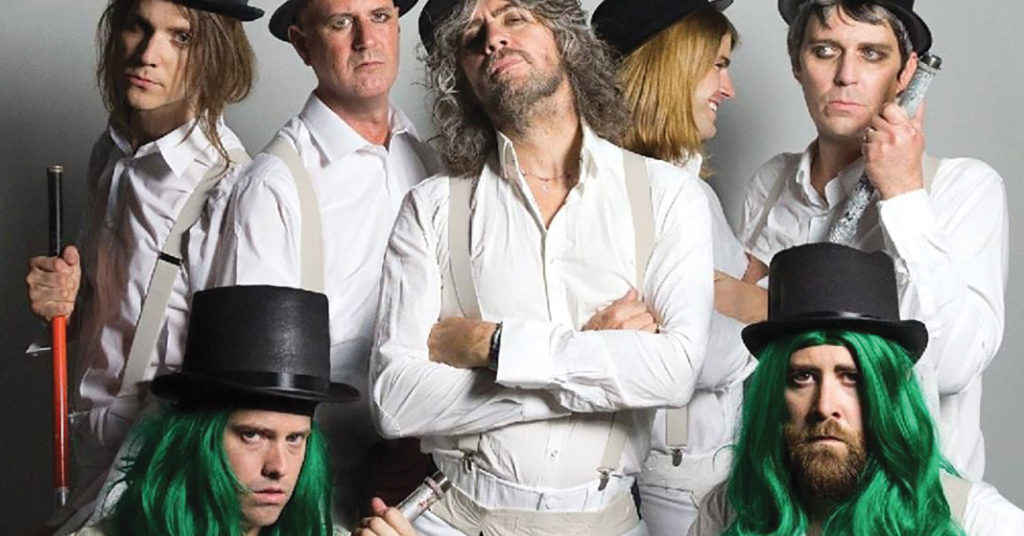 Before the Flaming Lips return to town to play at the Iroquois Amphitheater this weekend, we caught up with frontman Wayne Coyne over the phone to talk about the band’s recent greatest hits record and his idea to press Miley Cyrus’ urine into vinyl, as well as rolling around in that giant plastic ball.

LEO: The band’s greatest hits album feels like it was curated with real intentionality. What was it like to revisit all those years of material?
Wayne Coyne: That is such a wonderful thing to say. Thank you for noticing the level of thought that went into that release. It was definitely fun to be able to immerse ourselves in older Flaming Lips music, some of which we hadn’t heard since we first recorded it. There were so many times that we’d be like, ‘Jesus, what the fuck is that? That’s insane!’ We were truly surprised by just how ridiculous and free and un-normal it all is.

Speaking of un-normal, we heard you are trying to procure some urine from Miley Cyrus to add to a potential vinyl pressing of her record, Dead Petz. Is she on board with that?
If we ask her on the right day, I think she will go along with it. But even if we do successfully get away with Miley’s pee and move forward with the project, her handlers might still come back and say that she doesn’t need any extra controversy at the moment, and shut it down.

What’s the worst thing that’s ever happened while you were rolling around the crowd inside the giant plastic ball?
One time I narrowly avoided crushing some little kids who were on their parents’ shoulders. Another time the ball deflated almost immediately, and I had to be relaunched in a different one. Oh, and then there was the time my pants split wide open exposing my crotch to thousands of onlookers.

The Flaming Lips play Iroquois Amphitheater this Sunday, Aug. 26 at 8 p.m. An official after-party takes place at Jimmy Can’t Dance, where the Flaming Lips drumming duo, The Brothers Griin, will be DJing.