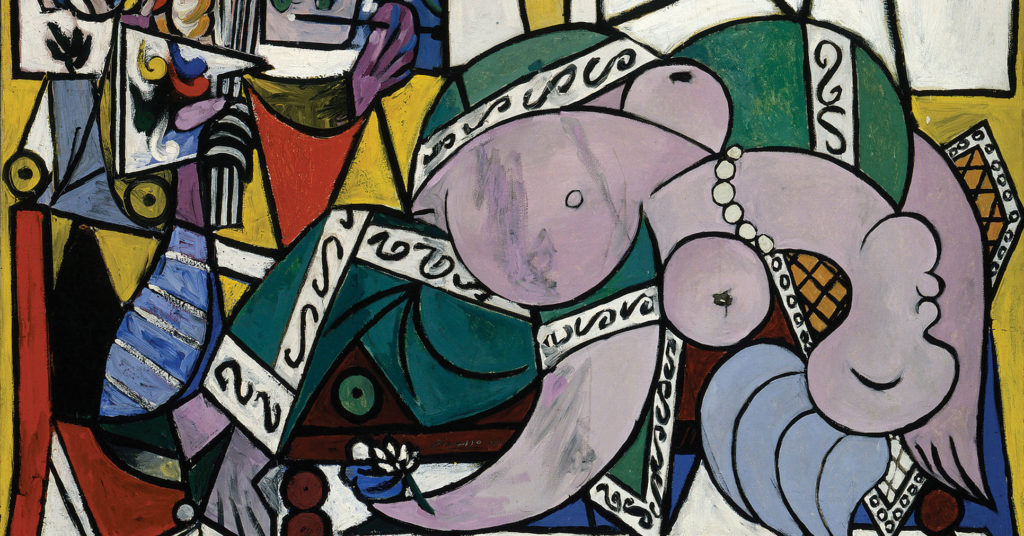 "The Studio" by Pablo Picasso. | Oil on canvas.

“The strangeness will wear off and I think we will discover the deeper meanings in modern art.” — painter Jackson Pollock

Art in the 20th century is so varied and abundant that even art historians find it hard to keep up. Cubism, surrealism and abstract expressionism are just a few of the movements that stumble over each other to be the art of its day. You can study the history of art for years, or you can do a CliffsNotes version on early-to-mid 20th century art by visiting the exhibition “Picasso to Pollock: Modern Masterworks from the Eskenazi Museum of Art” at the Speed Art Museum.

The Eskenazi Museum, located at Indiana University in Bloomington, is undergoing renovations. That’s a plus for us because it’s loaning out portions of its permanent collection in a series of exchanges with the Speed (the museum, in turn, will loan works to the Eskenazi after it reopens). The show, with over 70 paintings, sculptures and works on paper, was organized by Jenny McComas, the Eskenazi’s curator of European and American art, and Erika Holmquist-Wall, her counterpart at the Speed.

Art in the 20th century meant freedom. No longer did artists have to create in a handful of accepted styles. As a result, expect a slight case of whiplash. Modern styles changed quickly, created by artists branded as revolutionaries. Included in the exhibition are big names and lesser-knowns, such as Pablo Picasso, Georges Braque, Gabriele Münter, Henry Moore, Isamu Noguchi, Kay Sage, Diego Rivera and Jackson Pollock.

The first gallery in the show displays cubism, with Picasso’s 1934 large oil on canvas “The Studio” the focus. It shows Picasso painting a model seductively splayed over furniture; in this case, the model is one of his well-known mistresses, Marie Therese Walter. It’s a guaranteed conversation starter.

The expressionism area features Edvard Munch’s 1902 lithograph of “The Sin.” Munch’s work was deemed by the Third Reich to be degenerate, a term it used to describe modern art. The Nazis so disliked modernism that they removed the art from museums and displayed it in the Degenerate Art Exhibition of 1937. Some works were later destroyed, and the artists, if they were lucky, escaped to America.

Sage, an artist I was unfamiliar with, is included in the surrealism gallery. When I saw her “Lost Record,” a 1940 oil on canvas, from across the room, I thought it was a Salvador Dali. She was one of few women artists accepted by the Surrealists.

The “Wars and Revolution” section covers over 30 years, from 1914 to 1945. In this area, you will find artists as varied as Pollock, Rivera and Henri Matisse.

Pollock, (in)famous for his abstract expressionist drip paintings, did a series of six untitled silkscreen prints on paper in 1951. To view the complete set is rare, as only three museums in American have all six prints (the Eskenazi is one). Printed in an edition of 25 by Pollock and his brother, the series is of abstracted figures, not the nonrepresentational marks Pollock is best known for.

There are numerous programs associated with “Picasso to Pollock,” including the film “The Mystery of Picasso” on Sunday, Aug. 26. Visit the Speed’s website for additional events.