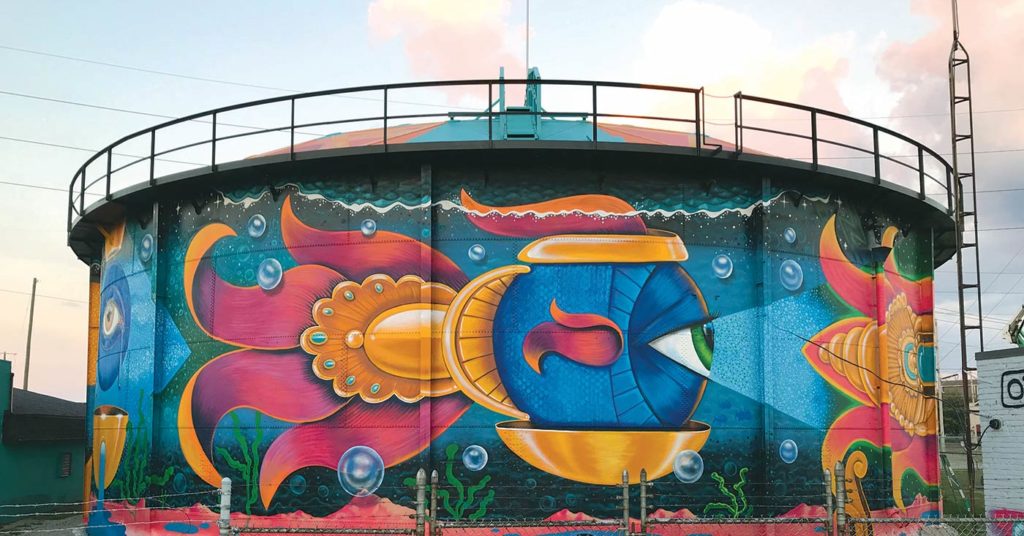 Water Tank Wilfred Sieg 2018 (one aerial and the side view)

Public art is, in most cities, a source of community pride and ridicule and, increasingly, a locus of cultural debate. In Louisville, that debate has been about the John B. Castleman statue because of his Confederate past. But Louisville also has a rich collection of less-controversial public art, including dozens of new murals and older sculptures such as Ed Hamilton’s “York,” Serkan Özkaya’s “David (inspired by Michelangelo)” and Barney Bright’s “River Horse.”

Now, Southern Indiana is working to expand the opportunities for SoIN residents to experience art both in gallery-type spaces and in public.

This is most apparent in Jeffersonville and New Albany.

From Interstate 65 in Jeffersonville, you can see the water tank painted by artist, Wilfred Sieg III, who is known for many large-scale projects including the Joe Ley Antiques mural on Market Street in Louisville. The water tank had been unused by the city for many years. With the decision to dedicate space to an arts district, the water tank is a very large piece of that space.

A member of the Jeffersonville Public Arts Commission, John McCarthy told the News and Tribune that he thinks “the design alludes to aspects of nature, whether it’s fish or whether it’s birds or air atmosphere or water atmosphere.”

“It’s a sort of interesting mix of the elements of the Earth,” he said.

Inside the dedicated arts district, Jeffersonville is creating an art park. The triangle lot surrounding the Vintage Fire Museum will have benches, umbrellas, a walking labyrinth and other interactive elements such as oversized games. Eventually, the depot area near the Vintage Fire Museum will include refurbished shipping containers that will house artists, a stage and bathrooms.

“Public art not only enhances our environment, it showcases innovation as well as creativity, has the power to transform, but more, it defines us as a community,” said Dawn Spyker, who started her public art campaign as a volunteer before being hired as the city’s public art administrator.

The recent lantern-making event uses the lanterns during the Steamboat Nights Heritage Festival, and, starting with the first on Sept. 15, there will be three Nicho-making events for the Sugar Skull Shake, Shake Cultural Festival commemorating Día de los Muertos, the Day of the Dead. Nichos are mixed media projects that blend Catholicism and indigenous religious practices with popular culture. They are often presented in a shadow box format and are popular throughout Latino cultures. They are displayed on altars during the holiday.

In New Albany, the #IamPublicArt festival held each year on New Albany’s Waterfront will enter its third year, following the Harvest Homecoming Parade in the first week of October. This year the festival will feature art installations, music and hands-on activities. “We decided to also incorporate local artists doing live mural painting at the site. There will also be skateboarding sessions and competitions with prizes, which was a big success last year,” said Daniel Pfalzgraf, curator for The Carnegie Center for Art and History.

The Carnegie Center is seeking to complete the New Albany Flow Park, an art/skate park that will offer residents of New Albany a new healthful outdoor option as well as one that adds to the public art landscape.

“Once the Flow Park is completed, we will be adding over 14,000 square feet more of [skating] space to the region,” said Pfalzgraf referencing the 40,000-square-foot Dave Armstrong Extreme Park in Louisville. Although an opening date has yet to be announced, The Carnegie Center is fundraising for the park on its website: carnegiecenter.org.

Public art in Southern Indiana isn’t new, but the enthusiasm and cultural focus of that art is.

“Our public art efforts have been collaborative not only as interdepartmental efforts but also across our community and beyond,” Spyker said.

New Albany’s public art efforts are a bit different. The city has no dedicated public arts person or plans to hire one. In that absence, The Carnegie Center leads the public arts projects.

“Art, in and of itself, adds to one’s overall quality of life,” Pfalzgraf said. “Public art and activities are especially beneficial for residents in Southern Indiana.”

He believes the Ohio River acts as a kind of psychological barrier for people in Louisville and Southern Indiana. “I’ve often spoken with people living on both sides of the river that are apprehensive about crossing bridges, which unfortunately eliminates a lot of amazing experiences that can be had within a 10- or 15-minute drive.”

“Given that, we need to make sure that Southern Indiana residents are served with high-quality, educational and entertaining experiences,” he said.