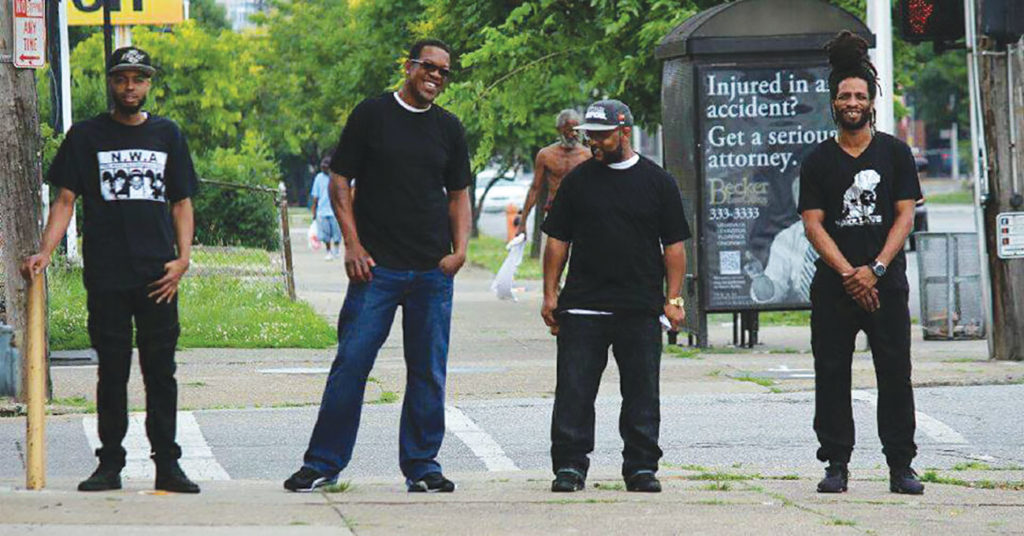 The “Straight Outta Comedy” show, which takes its name from the movie “Straight Outta Compton,” promises to find the funny from four perspectives: local comics Chris Crowder, Mike Laws, Lucious Williams and Kevin White. “Of course, it’s four black guys, but it’s like we’re all from four different corners of the Earth,” Crowder told LEO. Catch them this Thursday through Saturday at The Caravan.

LEO: How did this show come together?

Chris Crowder: We’d all known each other awhile and been wanting to do something together. But this started when we were sitting around the club, the movie ‘Straight Outta Compton’ about N.W.A. had just come out, and we were talking about it. I think I was the first one to say the words ‘Straight Outta Comedy,’ and it was like a light went on for all of us.

What makes you four work so particularly well?

Everybody has totally different styles. Of course, it’s four black guys, but it’s like we’re all from four different corners of the Earth. Lucious, he’s young, not married, been in the military. He’s just laid back and chill. Mike Laws, he’s the edgy one, he’s the firecracker, and he’s the renegade. I’m more of the family man. I’m certainly not the leader, but if you need to get everyone in one room, I’m the one you call. I’m the mama of the group. Kevin is just pure comedy genius. The dynamics of it are cool. When you see the show you’re going to see four different aspects of a black man, all on one stage.

Almost in different phases of his life?

Exactly! You got the young one, the fiery one, the dad and the one with wisdom. It’s funny you said that, because that’s almost exactly how it is. I don’t know what that means for which of us is going to check out first — who has to be the old fart?

How are Louisville audiences different from any other audience?

Louisville is a weird city. It really is. We love what we love — but it takes us a while to love it. You really have to put that work in for us to love you. But Louisvillians are passionate about what they love, and once you get on that love side — they aren’t going to ever let you go. Louisville crowds don’t do one night stands. If you rock them one night, they will love you forever.

What was the best part of childhood in Louisville?

I grew up in the ‘hood, man. We did dangerous stuff. In the wintertime, we would grab the back of the TARC bus and just slide with it. We grew up in the ghetto. Our idea of fun can be a little dangerous. In my life, this city has grown and changed so much. It doesn’t look anything like it did when I was a kid. But it still feels like home. It’s big enough that we hold our people, but, other than that, we’re good. We look at other cities like, ‘We cool. We don’t want your people ­— you keep ‘em.’ Derby is enough. They’re here for two weeks, rough up the city a bit, and then we kick them out.

A lot of your comedy is about your family and fatherhood. What have you learned?

They think dad is crazy. Here’s what I learned: With kids you go from ‘da-da’, to ‘dad,’ to ‘pops,’ and now my oldest son has started calling me ‘old man.’ That’s the evolution. And I’ll tell you, it burns me ­— I’m not even 40! He’s 20. He’s hitting the weight room and stuff — so I think I’ve got one more takedown in me. After that, we’ll have to start shooting at each other or something. But really, I love my family. They write my jokes. I just sit back, watch and listen.

Do they get mad when you talk about them onstage?

No, because once you set the tone that you’re crazy, they can’t get mad at you for anything you say.

When they write the book on Chris Crowder, what will it be titled?

It probably won’t even be a book. It will probably be a pamphlet, a brochure of what not to do with your life. Here’s what I know: I love, love. I love being around people who love. That’s who I try to be, and that’s how I want to be remembered.