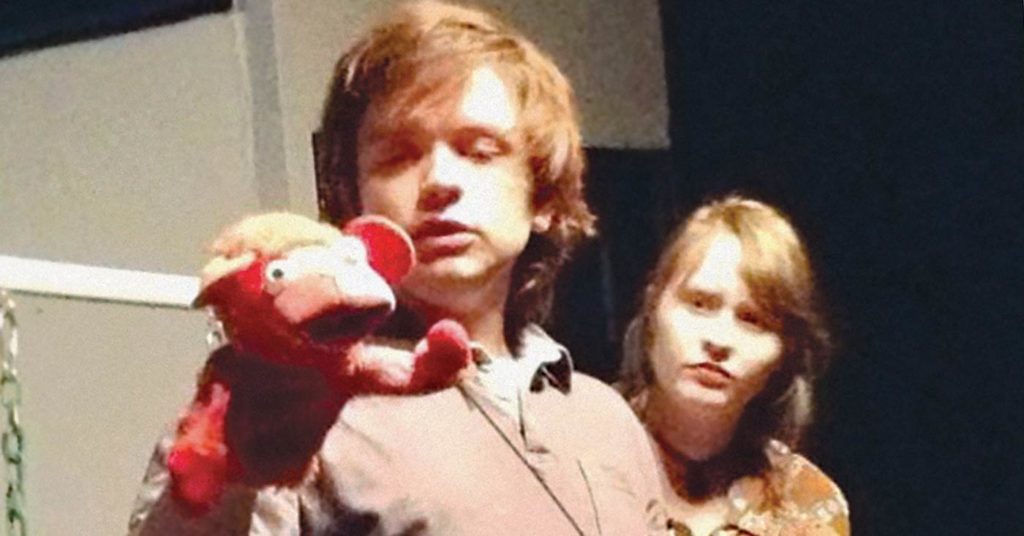 L-R: Sean Fannin and Clare Hagan in ‘Hand To God.’

God and the Devil work in mysterious ways.

That, at least, is one possible takeaway from two vastly-different satirical looks at American Christianity that are running now on Louisville stages.

“Altar Boyz,” a wildly-popular musical by Gary Adler, Michael Patrick Walker and Kevin Del Aguila is also among the most popular Off Broadway musical productions of all time. It’s the story of a Christian “Boy Band” that tours the country saving souls with personal anecdotes and a slew of songs that run the stylistic gamut from hip-hop to power ballads and to Latin grooves.

The Altar Boyz also have a great new gadget at their disposal. It’s a divine digital device — created by their corporate sponsor, Sony — called the Soul Sensor DX-12. It’s a scanner that reads all the souls in the audience and diagnoses how many are in need of saving. And, you can rest assured, the Altar Boyz aren’t leaving the stage until they’ve saved every soul in the hall.

Pandora Productions is presenting “Altar Boyz” at the Henry Clay Theatre in a fun, frothy version with a fine onstage musical combo and a cast that embraces and embodies the safely-frisky sentimentality that captured — at least for a cultural moment — the hearts of teens around the turn of the century.

There are five Boyz in the group named Matthew, Mark, Luke and Juan — and, uh, Abraham, (played respectively by Cameron Conners, Michael Detmer, Tony Smith, Remy Sisk and Alfie Jones). The first four are Catholics. But the Altar Boyz are proponents of racial and ethnic diversity. And, indeed, they’re proponents of religious diversity — especially when the realize that the only talented lyricist in their circle happens to be the Jewish lad named Abraham.

Michael Drury and Mark Stein (both of whom are credited as producers and directors) set a fast pace in this dance-filled song fest, and the band (lead by Conductor Daniel D. Martin) covers all the styles with confidence and flair. The action plays out as a concert performance by the Boyz, and the technical and design elements are outstanding (costumes by Susan Toy; Tech Director Jordan Lyons; special set pieces design, Eric Algeier; lighting, Martin French; sound, Laura Ellis; and props design, Jill Marie Schierbaum).

The plot, such as it is, begins by recounting the story of the band’s creation and then delves into the sad tale of Juan’s quest to regain contact with his long-lost family.

In the end, though, this is a play about friendship, loyalty and artistic integrity — and what happens when big record labels bring money to the table in an effort to split the group. And it’s Abraham, the quintessential outsider, whose ethical epiphany (in an excellent performance by Alfie Jones, who also choreographed the production) fosters an emotional reconciliation. Assuming that the Soul Sensor DX-12 readout was accurate, everyone at the Henry Clay was in a state of grace, at least through the curtain call.

There are no high-tech props in the Wayward Actors production of Robert Askins’ play “Hand To God,” which first appeared Off Broadway in 2011 and then found its way to Broadway (and five Tony nominations, including Best New Play) in 2015.

Instead, the important props on the spartan set at The Bard’s Town Theatre are among the most ancient of storytelling tools: hand puppets (costumes and sets are by Katie Hay).

And there’s no froth in this play, either. Instead, it brims over with a dark wit that elicited plenty of well-earned gasps and laughs from the audience last weekend.

The story takes place in a Lutheran church in Texas. There, a recently-widowed woman named Margery (Jennifer Starr) has started a puppet club attended by three teens. Timothy (John C. Collins) is a cynical, alienated teen with a reputation as a troublemaker. Jessica (Clare Hagan) is a bright-eyed puppet enthusiast. And when we first see Margery’s son Jason (Sean Fannin) wielding his puppet Tyrone in an over-the-top version of “Jesus Loves Me,” we know that something is weird about that kid.

In fact, things got weird very quickly. Timothy, it turns out, is infatuated with Margery. So is Pastor Greg (Greg Collier), whose calculated efforts to “comfort” the widow seem chillingly plausible. And though Margery rejects the Pastor, it isn’t long before she plunges headlong into an affair with the teenaged Timothy.

Meanwhile, Jason’s puppet Tyrone takes over Jason’s life. The idea of a puppet that comes to life and takes over the puppeteer is a familiar idea in fiction, but Tyone’s particular brand of vicious savagery is a disordered reflection of male pathology in our time.

Tyrone is a foul-mouthed, misogynistic creature whose scabrous vision of what it is to be a “man” is rooted in violence, power and domination. As his antics grow more and more ferocious, the entire world of this formerly staid Lutheran congregation goes awry. When Timothy’s lascivious affair with Margery goes public, the puppet responds by taking a bite out of the teen’s ear. Suddenly Pastor Greg — whose biggest problem had been persuading Margery to schedule her puppet pageant — finds himself with a pile of sacred-secular dilemmas. Should he report Margery to the police for child molestation? And how does exorcism work in the Lutheran church, anyway?

This is not a play for actors afraid of extremes, and Director Jeff Mangum has assembled a fearless cast from top to bottom. Collins and Starr bring a fantastic madness to their impulsive romance. Collier’s plays the hypocritical pastor with a persuasively-bumbling sincerity. Hagan manifests a clear-eyed innocence as the young girl whose dose of compassion finally opens a pathway to healing.

But this play is dominated by Jason and his puppet Tyrone — or perhaps by Tyrone and his puppet Jason. Either way, Fannin turns in a formidable performance full of verbal pyrotechnics as he flips back and forth between the two personae. •