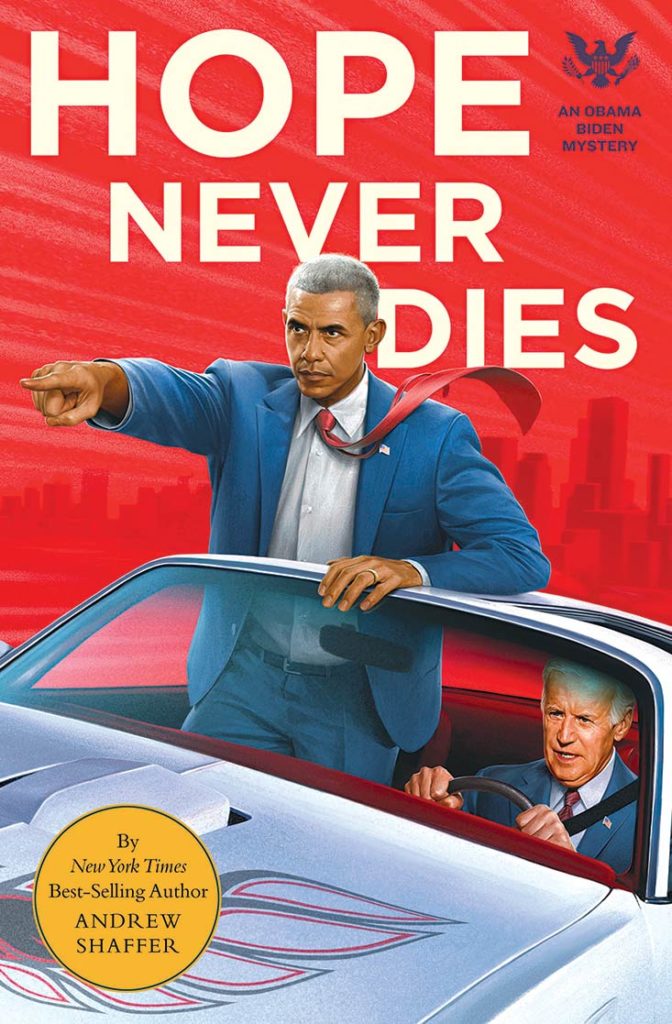 The great American bromance of the last 10 years has gone down the tubes? Say it ain’t so, Joe!

…that would be Joe Biden, of course. And, at the start of a very fictional, very tongue-in-cheek buddy-mystery novel, a clumsy fist-bump is all the affection that Uncle Joe gets from former President Obama. POTUS 44 has only deigned to drop by Delaware quickly to say that the train conductor for Biden’s famous Amtrak commute has been found dead under mysterious circumstances.

Don’t worry, we’ll see Obama again. Hey, you knew that was gonna happen — but you may not have expected the sawed-off shotgun he’ll eventually brandish. This is “Hope Never Dies” by novelist Andrew Shaffer. LEO got to spend a little time with the Lexington-based author on an early stop on the book tour, which will bring him to Carmichael’s this week.

Early on in our exchange, the author remarked on his pleasure that the response to the “first Obama Biden mystery” (his publisher already has him at work on another) didn’t include a lot of rabid trolling. This is especially true because some of Shaffer’s previous novels were less about gently exaggerating when it comes to true-life subjects. Or, as he puts it himself, “This isn’t satire like the last book, which had Ted Cruz as a serial killer.”

Still, these are public figures whom Shaffer is writing about and fictionally putting them in the path of danger and physical harm. So there were lawyers reading over everything — but it’s not something the author hasn’t gone through before. The publisher of Shaffer’s “Fifty Shames of Earl Grey” felt the need to have legal representation pore through the entire “Fifty Shades of Grey” trilogy. At the end of that reading assignment (all of it billed at considerable rates), the lawyer called up Shaffer with a dig: “That is a weekend of my life I will not get back. I will never forgive you.”

Writing comedy is, at least for many authors, famously difficult. Here there was perhaps an unusual twist on that adage, given his previous success with outlandish satire. But he is now straying from that style, with a more-grounded approach. To do the consistent tone for this book, it took “write 20,000 words, then throw them out. Write another 20,000, throw them out. I would say I wrote enough words for two books — this is just what made the cut.” But he was glad that he took on this challenge in a storytelling genre that he loves. Shaffer is a fan of noir/hardboiled fiction tales, citing authors Elmore Leonard and Donald E. Westlake and filmmaker Quentin Tarantino among his influences. And it was also important to Shaffer that, as an observant Kentucky writer, this novel could include a solid arc addressing the opiate abuse crisis.

Shaffer has met Biden once, at a stop on the former vice president’s own book tour. Shaffer thought of commenting on his then-in-progress take on turning Obama and Biden into a contemporary Holmes and Watson — but Biden was turning on the charm that night. “He’s so charismatic and gracious…very disarming. He just smiles at you and you can’t talk. It’s like a tractor beam that just pulls you off your feet.”

Having seen Shaffer hold fast the entire room at a reading/signing, I can vouch that he’s got some charisma himself, along with plenty of wit.